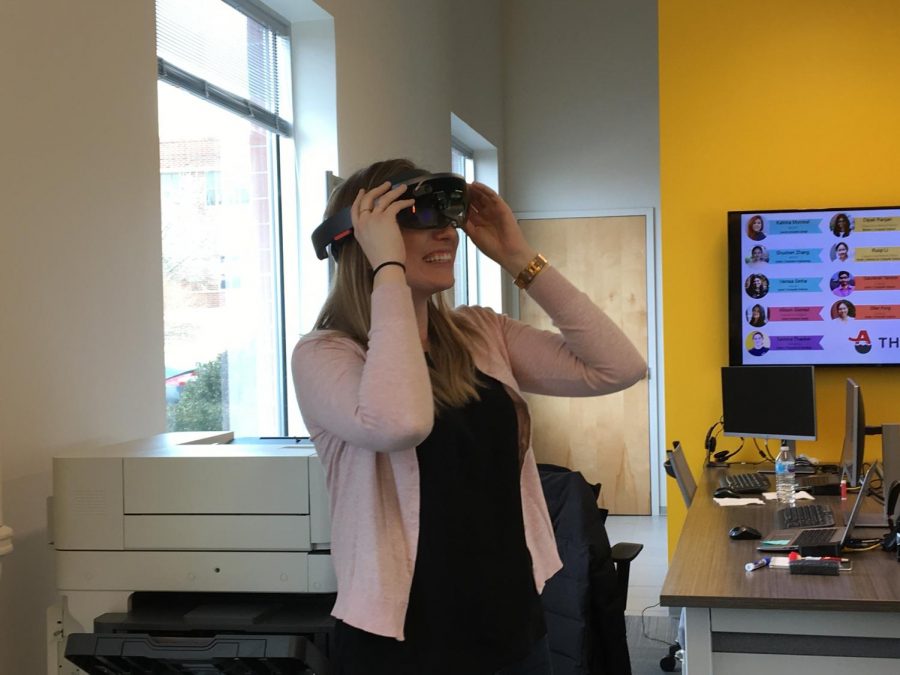 Sarah Woody tries on glasses for a recent augmented reality project at AARP’s technology lab, The Tech Nest, in Research Park. AARP is a nonprofit organization that strives to benefit those who are aging with innovative solutions.

AARP’s technology lab, The Tech Nest, at Research Park is a space where student contractors work on groundbreaking, technology-focused projects to answer some of society’s biggest problems, including enhancing the lives of aging populations.

AARP is a nonprofit organization that strives to benefit those who are aging with innovative solutions. The Tech Nest opened in 2016 and functions as the rapid prototyping arm of AARP, benefiting from the University’s student population and its resources. Currently, there are 16 student contractors working there. The Tech Nest’s collaboration has created opportunities for students to apply the skills they have learned to real-world scenarios.

Celine Brookover, senior in Business, works at the Tech Nest as a marketing and communications intern. She believes in the strong benefits of the projects that the student contractors create.

“The Tech Nest aims to apply technology that would mostly be applicable to millennials and instead figures out how aging populations can use it,” Brookover said.

While some projects are more member-facing, like the future augmented reality project, others are for internal development. Some student contractors are currently working on Amazon Alexa skills that would be beneficial to the success of the members. This project aims to explore the benefits that the Amazon Alexa could have for older generations and be a segue to other technological skills.

Internal development projects include those that help employees analyze the data they collect. Katrina Montreal, senior in FAA, has recently been working on a project for augmented reality. Augmented reality is similar to virtual reality in that it can be translated into wearing a pair of glasses or other types of technology.

Montreal works with a team of two other people. As the designer, her job is to design the experience as well as the visuals the audience would see. The two other members of the team work in computer science and engineering.

“They program the visuals I put in to complete the actual task,” Montreal said.

Montreal’s goal for the project is to work toward creating a possible future application for augmented reality. This could include having biometrics data saved and possibly being able to digitally talk to a doctor, which then could lead to having an in-home diagnosis.

Aging populations could potentially communicate with doctors without leaving their home.

This could work if most people in the future had access to Google Glasses or Microsoft HoloLens, which is the technology they are currently using

Student contractors are assigned projects at the beginning of each semester and work on them as the term progresses. The students work for 10 to 15 hours each week during the fall and spring terms, and 40 hours a week in the summer. About once a week, the teams meet with a senior lead from corporate. At the end of each semester, there is a presentation about the progress made.

“They will come to me with requests, and I will review those requests and figure out what is a good fit and what’s not,” Kemp said.

While the Tech Nest’s projects are geared toward helping aging populations, they benefit all ages. A past project that was originally geared toward adult volunteers who worked with children proved more beneficial to young children.

Overall, these projects benefit people of all ages whether directly or indirectly. The Tech Nest’s ingenuity and success are in part dependent on its student contractors from the University.

“There is a lot of student talent here at the University of Illinois, and the Tech Nest uses this talent for good,” Brookover said.