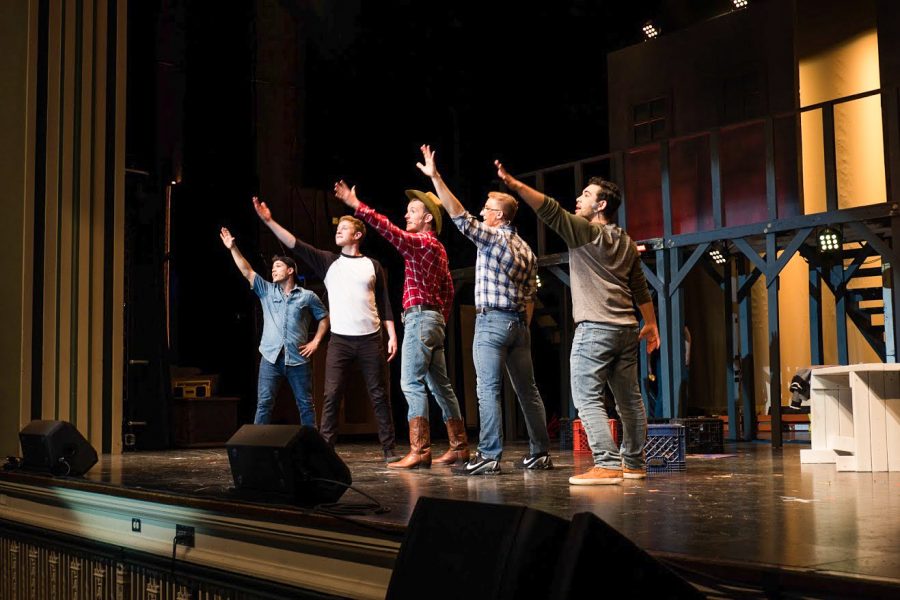 Students in Illini Student Musicals perform at their “Footloose” dress rehearsal at the Lincoln Hall Theater on Wednesday. The actors performed a flash mob on the Main Quad to advertise the show.

“Footloose” has captivated audiences for generations. From Kevin Bacon in the ’80s cult classic to the stage adaption in the late ’90s, the story of Beaumont’s dancing-deprived teens has attracted nearly three decades worth of audiences. Fortunately for University students, this story has now come to life in Illini Student Musicals’ production of the hit musical.

The production opened Saturday at 7:30 p.m. and ran through Sunday in the Lincoln Hall Theater.

“Footloose” tells the story of Wren, a Chicago teen who moves to the small town of Beaumont. He is shocked to discover that Reverend Moore, the town’s influential pastor, has made rock music and dancing illegal. With the help of the town’s youth, he sets out to change his new home for the better.

Mike Scully, senior in AHS, was cast as Wren.

Wren isn’t the only one discovering new things while doing what he loves. Kate Jurkovic, senior in ACES, is stepping into the director’s seat for the first time with this production.

“It’s something I’ve always wanted to do,” Jurkovic said. “I had some experience (directing) in high school but this is my first full-length production. It’s surreal.”

Jurkovic said the powerful feeling she experienced when realizing the dream she had pursued since September was finally becoming a reality. Her favorite memory from rehearsals was the first time she heard the entire cast sing together.

“I remember thinking, ‘This is crazy, I can’t believe this is actually happening,’” she said. “When the cast sang with the band, I cried.”

The show’s dance and musical numbers provided variety. Jurkovic said the number “Mama Says” is her favorites because of how quirky and unique it is. Scully said he prefers the challenging action-packed number “I Can’t Stand Still.”

Riley Wilson, freshman in FAA and who plays the role of Ariel, said she loves “Almost Paradise,” which is a ballad she performs with Scully.

“It slows the whole show down for just a minute … It’s really beautiful and emotional,” Wilson said.

Even though they each have the cast members own favorite songs, they all mention one number in particular: the finale.

“We are all out on stage, no one’s in the wings waiting for their moment. The entire cast gets to perform together,” Scully said.

Aside from inspiring the audience to push themselves out of their comfort zone to achieve their goals, they said performing the show has taught the cast to do so as well.

“Performing has taught me discipline,” Wilson said. “I’m a fidgety person, but on stage and in rehearsal you need to be completely focused and give it 110%, otherwise your show won’t be as good as it can be.”

Scully said one day they had to perform a flash mob on the Main Quad for the show. While it was intimidating and people were a little confused, he said it ended up being fun to do.

As the show’s arc is driven by its young characters, it is fitting that the cast and crew are made up of young adults as well. Students in all different majors and areas of expertise come together, contributing talents in costume design, lighting, singing and more.

Scully said she feels liberated by the student’s autonomy.

“It’s like our parents are gone for the weekend, and now we get to take over,” he said.

Through energetic dance numbers and lighthearted songs, the musical can come across as an ode to youth and rebellion. However, “Footloose” also tackles more serious themes. Characters deal with abuse, grief and having their voices taken from them.

“This is an important lesson for college students and people of this generation,” Jurkovic said. “Especially with the #MeToo movement … people are learning to speak up for themselves.”

Wilson also said students can learn from the teens of Beaumont.

“The kids are rebelling against rules that aren’t fair, but they aren’t disrespectful about it,” he said. “They handle it in a mature, adult way. It shows the power that youth can have in a community.”

“If you love the movie, you’ll love the show. It’s a classic from the ’80s, so bring your mom. You know she loves the music and Kevin Bacon … It’s something for both of you,” Riley said. “If you see the show, you’re guaranteed to walk out with a smile on your face, learn a few lessons … and certainly have some songs stuck in your head.”