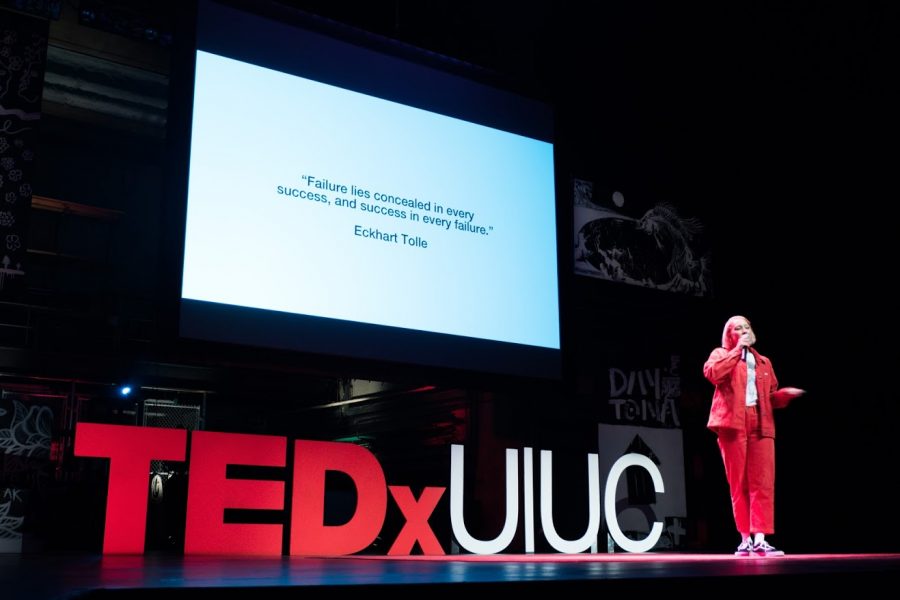 Elise Swopes speaks at the TEDxUIUC conference at Krannert Center on Sunday.

Speakers from different backgrounds with unique stories gathered at Krannert Center for the Performing Arts on Sunday to partake in TEDx UIUC 2019: Emerge.

TEDx is independent of the better known TED talks. The TEDxUIUC webpage says it was created “in the spirit of ideas worth spreading,” and that the program is “of local, self-organized events that bring people together to share a TED-like experience.”

People like Jack Fusco and Katie Hoff came and spoke to students on campus. Fusco is a landscape-astrophotographer/timelapser based out of San Diego, California. Hoff is a former Olympic swimmer who won three medals.

“It’s pretty like motivational,” said Sylvia Rojas, freshman in DGS. “I feel like they give their own personal stories.”

She said the speakers talk about how they started and built up to become successful people. She said that she likes to listen to them.

Rojas said her favorite speech was Hoff’s. Hoff spoke about her dedication to swimming and how after giving up swimming, she set a new goal for herself.

“She seemed pretty motivational,” Rojas said. “She seemed like she was struggling, but she worked her way up.”

Carl Gunter, professor of computer science, focused his speech on genetics, its future and past ethical issues. He also mentioned the current use of the field, referring to 23andMe and ancestry.com in his speech.

Another speaker at TEDx was Elizabeth Lombardo, who was described on the website as “America’s most interviewed celebrity psychologist” and has appeared on Dr. Oz and other shows. Her speech focused on the inner critic that everyone has and how to control it instead of being controlled by it.

Lombardo referred to conditional self-worth, which is based on lower self-respect in conditions such as comparing oneself to others.

“Now we see this supported in the research that consistently shows the longer people spend on social media, the more likely they are depressed,” she said. “It’s gotta be perfect or else you’re a failure; conditional self-worth.”

She said that one way to cultivate unconditional self-worth is to apply the values that are most important to you.

“That characteristic that you admire in someone else is also what you admire in yourself,” she said. Lombardo gave the example of compassion and mentioned that the first step does not have to be grand.

Jack Fusco’s speech included anecdotes about his journeys to remote places for capturing photos of the night sky. Going beyond the stories, he showed the audience some of his photography, which made his speech even more intriguing.

“So far, I think they’re actually like really good events. I feel like I’m learning a lot,” said Ruben Barriga, a freshman in DGS. “I feel like they’re very engaging conversations.”

“To me, that felt like I should look at the world in a different point of view … and see the world for its true beauty. I feel like that one kind of made me rethink the way I view the world a little bit better,” he said.