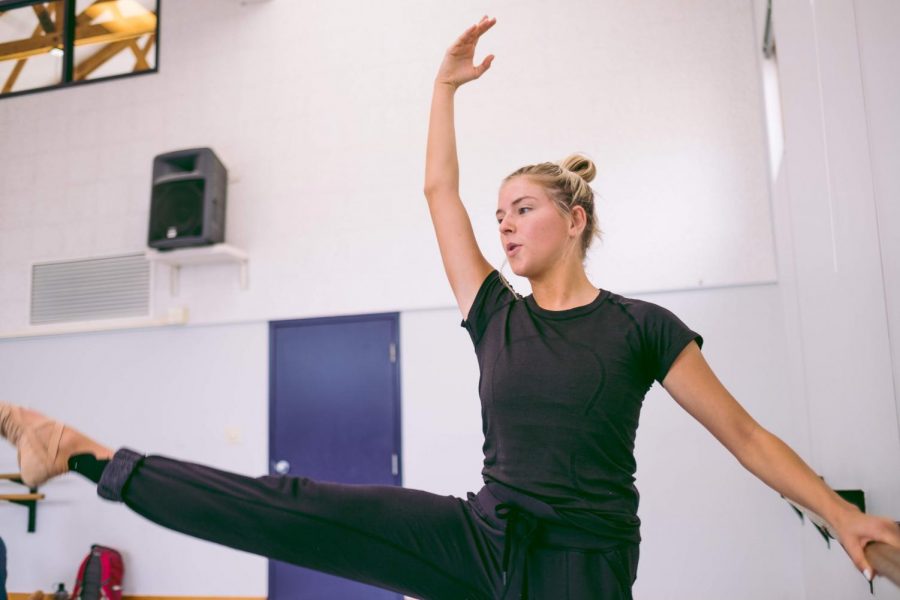 Emmaline Rapier, senior in FAA, practices dance routines at the Nevada Dance Complex on Thursday. She aspires to dance with a company as well as commercially after graduation.

Emmaline Rapier started dancing when she was 3 years old. As she began looking at colleges, she imagined herself as a marketing major and did not think she would continue to dance. This changed when she decided to audition for dance at the University.

Three and a half years later, Rapier is now a senior in FAA studying dance.

A typical day for Rapier starts early with a yoga class at 8 a.m. She then has her ballet class from 9-10:30 a.m., and after that she has a short break for lunch. Classes start back up with hip-hop at 1 p.m. From there, she goes to her production class, which ends around 5:00 p.m. Rapier’s days are typically packed, starting earlier and ending later than many students in other majors.

“I feel like the dance department is a lot different from other departments,” Rapier said. “Most people go to class once or twice a day and have a lot of homework after, and with dance, everything is in class, and usually once I’m done with class I don’t have much more work to do.”

Rapier said she has enjoyed the smaller class sizes and the setup of the major in general.

She also dances on Illinettes and works hard to find time to balance both busy schedules. Usually, this involves a lot of emailing and communication from teachers.

“It has taught me a lot because I know how to have a really busy schedule now, communicate with people and figure out my priorities,” Rapier said.

Her graduating class is only eight people and the program as a whole only has 80-90 students including graduate students. Because class sizes are so small, Rapier said she has become very close with her graduating class. They have been with each other almost every day for the past four years.

Rapier said she is still trying to decide what route she is interested in for the future. She wants to dance in a company as well as commercially.

“That means I’m doing stuff like back up dancing, touring, music videos (and) stuff that you see in pop culture, but I also want to try and juggle it with a company that is more high art,” Rapier said.

Jenny Oelerich, senior in FAA, said she never really considered majoring in dance. This changed when she talked to a few of her former dance teachers about their own experience and attended dance shows at the University.

“It suddenly became something I could see myself doing,” she said.

Oelerich said she has always been very interested in education, and she uses this passion when teaching morning yoga classes through the University and at a studio in Urbana. She said this has given her a fun way to stay busy while simultaneously making a constant income. On top of this, Oelerich also has been teaching second graders dance at a local elementary school.

Because they are both seniors, Oelerich and Rapier have to work on their final thesis. At the end of senior year, each student produces a thesis and performs a show they create. They work on this throughout the year, picking a cast and then choreographing a dance with them. Students then write a five-page reflection paper and give a short presentation before graduating.

Each part of the senior thesis is demanding, according to these seniors, and students receive lots of feedback from professors as well as peers.

Alyssa Trelz, junior in FAA, has another year to go before worrying about her thesis. Trelz also teaches dance; however, she has taken her talents to the Art In Motion Dance Studio in Champaign. There, she teaches both classes and private lessons to younger kids from ages 8-15.

On top of her teaching, Trelz also has a busy schedule packed with classes throughout the day. In addition to her physical dance classes, Trelz also takes classes on dance history as well as anatomy and kinesiology classes specifically for dance majors. In these classes, students are able to get up and move around, exploring the anatomy and movements of dance.

“I don’t think I could have learned it as well in a normal classroom setting,” Trelz said.

Trelz said while she was choosing what to study at school, she couldn’t let go of dancing.

“As it got closer and closer to deciding on my major, I thought, I can’t not dance,” Trelz said.