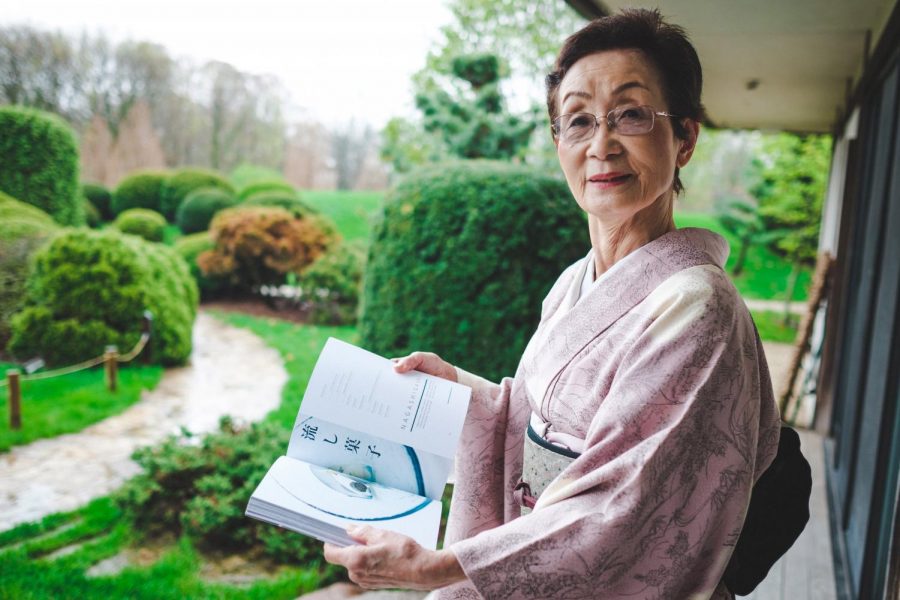 Kimiko Gunji shows off a page in her book, “The Art of Wagashi” at the Japan House on Thursday. The book attempts to make recipes accessible to inexperienced audiences.

Kimiko Gunji is the former director of Japan House and former professor of Japanese Arts and Culture at the University. She taught a variety of courses ranging from tea to Japanese flower arrangements and is a highly decorated recipient of awards for her teaching and cultural contributions.

Gunji recently published her new Japanese cookbook “The Art of Wagashi: Recipes for Japanese Sweets that Delight the Palate and the Eyes.” The cookbook is designed to be both informative with its easy-to-make recipes as well as visually pleasing with photos of different kinds of wagashi.

“Each sweet (was about) the eyes,” Gunji said. “It’s just so beautiful to look at (them). That was a very important part of my mission. When eating Japanese sweets, you’re using all five senses.”

Gunji was inspired to write a wagashi cookbook decades ago when she and graphic design professor A. Doyle Moore noticed the inadequacy of good wagashi in the local area. Many wagashi store owners in Japan keep their recipes secret, so there weren’t many cookbooks around. Moore was able to get hold of some recipes as an American, who later translated some of the recipes into English.

After retiring six years ago, Gunji started working on her book, one year before Moore passed away.

“I told myself I had to finish it,” Gunji said.

According to Gunji, there are two main categories of wagashi: namagashi — moist sweets with bean paste or jellies — and higashi — dried sweets usually made out of rice flour.

Different teas are paired with different types of wagashi. Light tea is usually accompanied by dry, small sweets whereas heavy tea requires more substantial sweets. For leaf tea, people would eat sweets in between sipping the tea. For matcha, a powdered tea, the sweets are always taken ahead of time to enhance the taste of the tea.

Gunji also pointed out the differences between popular American matcha and authentic matcha. Unlike the American styled matcha, where sugar and milk are deployed into its making, authentic matcha relies heavily on the quality and the technique of whipping the tea.

She pointed out the idea of “season” is central to Japanese art and culture, including the appreciation of wagashi. The sweets are often named according to seasons, such as “spring showers.” Wagashi designed for different seasons also take on unique appearances, with those designed for summer appearing cool and transparent with the help of agar-agar (a type of gelatin) and those designed for autumn carrying warm colors.

However, unlike many other Japanese cookbooks, where the recipes are ordered according to seasons and annual events, Gunji arranged her recipes according to their cooking methods.

Gunji was mindful of ingredient accessibility for her readers while writing the book. Historically speaking, Gunji found it almost impossible to find specific ingredients outside of Japan. She hoped readers would be able to find all the ingredients needed to make wagashi at local Asian grocery stores. Most of her recipes contain no more than water, beans, sugar and dried flowers.

Gunji made sure the recipes were easy for beginners by asking Japan House student interns, who had little experience in cooking or baking, to try preparing some of the sweets.

“I had the chance to cook one of the wagashi, and it was very easy to follow,” she said. “I’m not experienced in baking, but it wasn’t hard for me at all. It made me want to try the other recipes in the book to see what other varieties there are.”

Alexia Angel, another Japan House intern and sophomore in LAS, was impressed with Gunji’s attempt to take these Japanese delicacies and share them with more people.

“It is exciting to see all the work put into the physical presentation of the recipes as well as the efforts toward making traditionally East Asian recipes more accessible to audiences abroad,” Angel said.

Angel mentioned an interesting feature of the anmochi (a kind of mochi with red bean paste fillings) recipe was the use of a microwave. Gunji tried to make her cookbook more accessible to college students by including convenient appliances.

Gunji aimed to have the book embody simplicity in terms of ingredients and preparation, keeping in line with Japanese values, she said.

“One of the characteristics of Japanese culture is how to turn simple things into art and how to combine simple ingredients into something so beautiful,” she said.