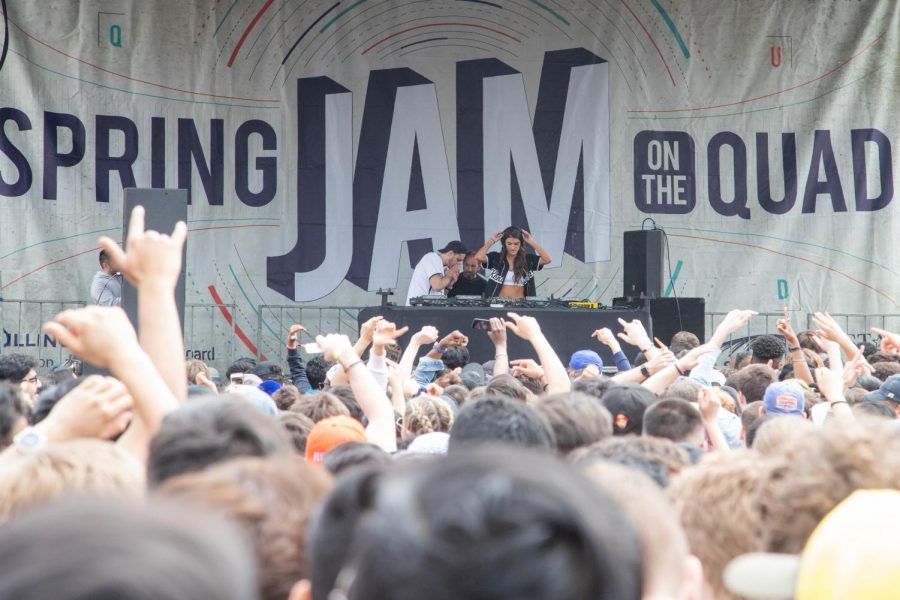 Kendra Videckis performs at Spring Jam 2019 on Sunday. Videckis, along with other female artists such as Kathy Hardy, said being a female in a male-dominated area is difficult, and they have faced many roadblocks during their careers.

By Therese Pokorney, Features Editor
May 2, 2019

From mixing beats in her free time to opening for Lil Yachty at Spring Jam last week, Kendra Videckis, senior in LAS, has been on the rise in the music industry. Becoming a self-made producer in the EDM community is no small feat, and being a female DJ in a college town creates even more obstacles.

After losing her father, Videckis turned to music as an emotional release, and she had no idea it would take her to where she is now. One of her tracks is now featured on Trap Nation, an  American YouTube music promotion channel which “showcases chill music and future bass,” and she also is a DJ at KAM’s on Wednesday nights.

However, she had a hard time  landing the DJ position as a woman, and being taken seriously was a lot harder for her than her male counterparts.

The conversation about representation of female artists is a hot button issue in the music industry, which raises questions regarding how to strive for gender equality in a male-dominated industry.

“The bars on campus are like boys-only clubs,” she said. “The belief that women aren’t capable of mixing music needs to change. If we don’t, women are going to keep facing roadblocks.”

Champaign-Urbana has had a solid reputation for it’s underground music scene ever since REO Speedwagon emerged in 1967, along with other names like American Football, Hum and  Poster Children. Although not every band from C-U makes it in the music industry, there are countless groups who perform at house shows and at local venues like the Iron Post, The Canopy Club, Blackbird and the Independent Media Center.

In 2018, just 14% of performers at U.S. music  festivals were women, and the gender pay gap at some of the biggest music-focused companies is a staggering 30%, according to a report by Keychange, a pioneering music initiative. Of the 600 most popular songs around the globe this year, only 2% were entirely produced by women, according to the report.

Since 1979, Kathy Harden, a guitarist and singer from C-U, has been taking the local DIY music scene to her advantage and has been involved in about 15 groups over the years, with five of them having other women.

Harden said she never had any problems with the male musicians she played with; however, there were a few bar owners in the area she found to be extremely sexist.

“The C-U and surrounding area music scene has ebbed and flowed, but it has never, ever died,” she said. “We have musicians that have been playing here for 50 years, and there are plenty of young startup bands as well,” Harden said. “I’ve been very proud to be a part of the scene for 40 years. My one complaint is this: The pay has not increased very much from when I began in 1979. I suppose the arts, as a whole, are not as valued as they should be, in my opinion. We do it for the love of music, but it would be fantastic to be better paid.”

Harden said although she doesn’t play house shows as often as she used to, she hopes the pendulum swings in favor of female artists. It’s important for other women to see female performers do what they love, she said, because it acts like a domino effect.

Non-house venues like the IMC are trying to do something about the issue and bring in more female-led bands, said director Brian Dolinar.

“The female hip-hop duo Mother Nature, as well as CJ Run, both performed at IMC early in their careers,” he said. “So IMC is happy to provide a springboard for local women and women of color.”

According to their calendar, IMC has not booked a single female performer in the last eight months.

“There’s a lot that goes into booking bands and performers at The Canopy Club,” said Mike Ingram, a 34-year-old Champaign resident, musician and DJ promoter via Amnesiac Booking for The Canopy Club.

“A lot of the bigger shows are national acts and are booked by agents, and we also need to consider if the act would work at a college campus.”

He sees the misrepresentation of women in the music industry but doesn’t know how to handle it on a national level.

“My focus tends to be on the local scene anyway since I’ve been a local musician from around here,” he said. “I have such an affinity for local stuff and try to build up local artists to a point where they have local recognition. That’s where my energy is placed.”

Ingram said he sees female representation at the local level but not enough of it. His favorite artists are women, and he has spent most of his musical career backing up female vocalists. He said the writing style of women is often better than men as well.

“I understand as a business, you book what will make you money,” he said. “It’s like watching women’s sports versus men’s. We haven’t broken that barrier, and I don’t know how to get there. If we keep pushing boundaries for more eyes and more ears, then we’re graduating a more equal representation and even split. There are festivals that book 50% women, and that’s a really cool initiative.”

Ingram said he likes to book nights that are all women but tend to find some backlash when promoters label it as “women rock night.” Instead, he said, it’s more so to not label it, or list bands, but not mention that all their front women are playing.

“You never really know who you’re impacting, and it sucks because you should be able to book cool s— and have people show up without mentioning women artists,” he said. “As we’re delving into this time, it’s getting harder to promote something that’s branded like that.”