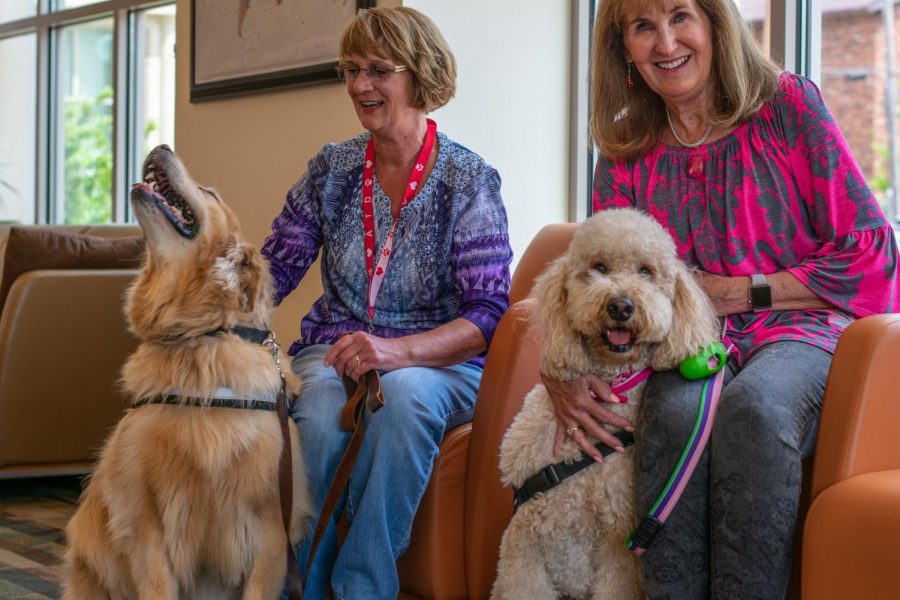 Therapy dogs sit down during an event held at the Center for Wounded Veterans in Higher Education on Wednesday. Therapy dogs are used to dissolve stressful situations, including finals week on campus. 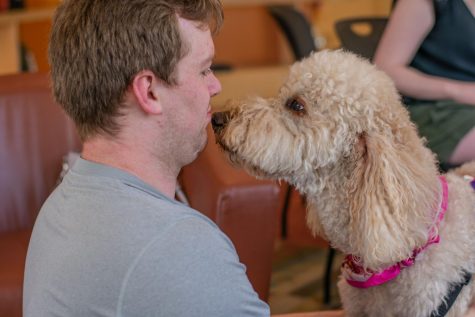 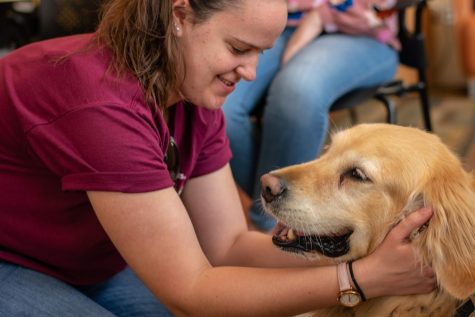 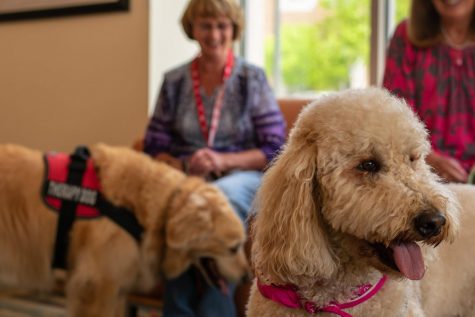 The Center for Wounded Veterans in Higher Education is hosting pet therapy events on several days throughout finals week to help students de-stress between taking finals and studying.

“It promotes really good coping skills and stress relief skills — something called self-regulation — so when you know you’re getting stressed out, knowing how to seek out a service that will help distress and relax you,” said Maria Nation, a social work intern at the center.

“From the moment I got him, everytime he sees people, he just gets so excited,” Kelly said. “My goal for him from the time I got him was that he would be a therapy dog because he just had that personality.”

Yogi also participates in Read to the Dogs programs hosted in libraries where children can read to dogs without fear of judgement.

“Kids will be too shy to read to adults, but they’ll read to a dog because the dog is not passing any kind of judgment on how they’re pronouncing their words or if they misread it — the dogs don’t care,” Kelly said.

Pet therapy can also be utilized by hospital patients, people in nursing homes and for child victims who may get nervous testifying in courtrooms.

“Being around animals for most people is just a nice break from studying, from everyday stressors or major stressors like illness, maybe loss in the family or going to court for a little kid,” Nation said.

Kelly points out there is a difference between a therapy dog and a service dog.

“A therapy dog’s only job is to make people happy,” Kelly said. “A service dog works for the only person he belongs to; you should never pet a service dog because he’s always working, and his job is to make his owner’s life easier.”

She said she has never been able to own a dog herself, so she takes any opportunity to go to pet therapy events to interact with one.

“It’s just a spot of joy in a stressful time of finals week,” Wolfe said. “It’s hard to be stressed and sad around a dog especially (with) a friendly boy like Yogi.”

The center will host its last pet therapy event on Wednesday with Brinkley the golden retriever at noon and the return of Yogi at 4 p.m.