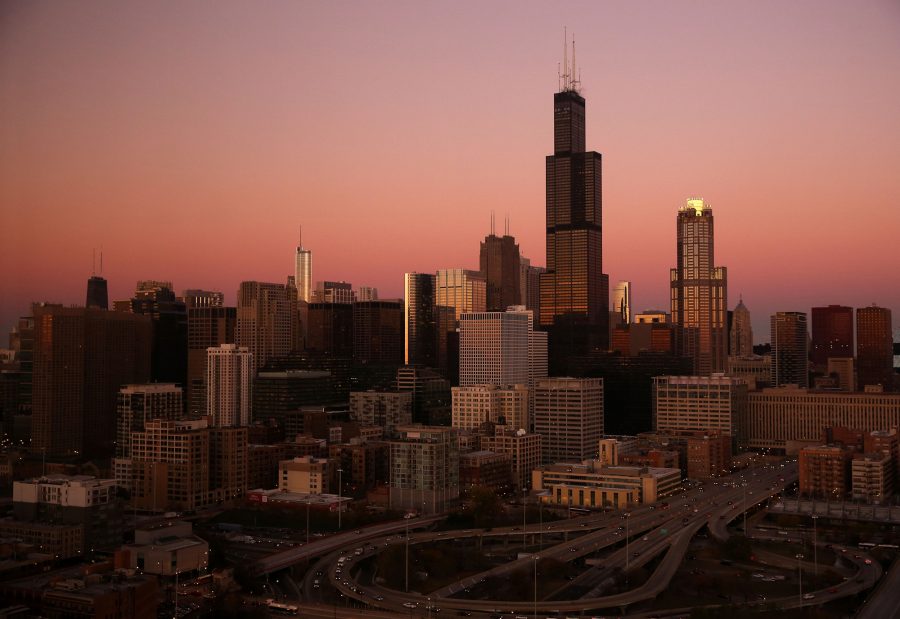 The sun sets upon the Chicago skyline in November 2013. Illini Fest attracted Chicago-based University alumni on July 18 with nostalgia-inducing exhibits.

The University held its first Illini Fest alumni event in downtown Chicago, and it hosted a variety of speakers and entertainment while promoting its role in the city’s history.

Illini Fest was held in Millennium Park’s Park Grill Plaza on July 18, next to The Bean, and it attracted hundreds of alumni to orange and blue tents during the hot summer afternoon. The Willis Tower also adorned school colors that evening; its antennas were lit orange and blue for the occasion.

The event’s focus appeared to be highlighting the ties of Illinois alumni to the city of Chicago. One of the many speakers was Carlos Ramirez-Rosa, alderman of Chicago’s 35th Ward and Illinois alumnus. Ramirez-Rosa, the youngest alderman on the Chicago City Council, was elected to the Illinois Student Senate while attending the University.

The University also created and distributed a magazine of interviews with and biographies about graduates who have done significant work in Chicago. Those featured in the 74-page publication include Fazlur Khan, architect of the Willis Tower and 875 North Michigan Avenue (formerly the John Hancock Center); Michael Strautmanis, the chief of civic engagement for the Obama Foundation; and Maudelle Brown Bausfield, the first female African American student at the University and first African American principal in the Chicago Public Schools.

Meanwhile, the venue was filled with many of the University’s other alumni, who represented several generations and were nearly all wearing Illinois apparel — myself among them. Two months after leaving Champaign-Urbana with my diploma, I attended Illini Fest as a break from graduate classes and enjoyed the school spirit (and refreshments) on display in the heart of Chicago. My first takeaway was alumni even decades out from college still enthusiastically respond to calls of “I-L-L!”

Understandably, Illini Fest targeted attendees older than I with reminders of the University’s latest athletic stars and academic research, and they were too fresh in my mind to elicit surprise or nostalgia. It was, however, my first glimpse of the impressively large Illini alumni base in Chicago, and I learned a lot about the city’s many connections to the University.

If the University follows through and makes the Chicago event an annual tradition, I recommend alums and students alike to bring a friend and attend Illini Fest next year. It proved to be an excellent showcase of the school’s widespread and persistent community that graduates never leave.