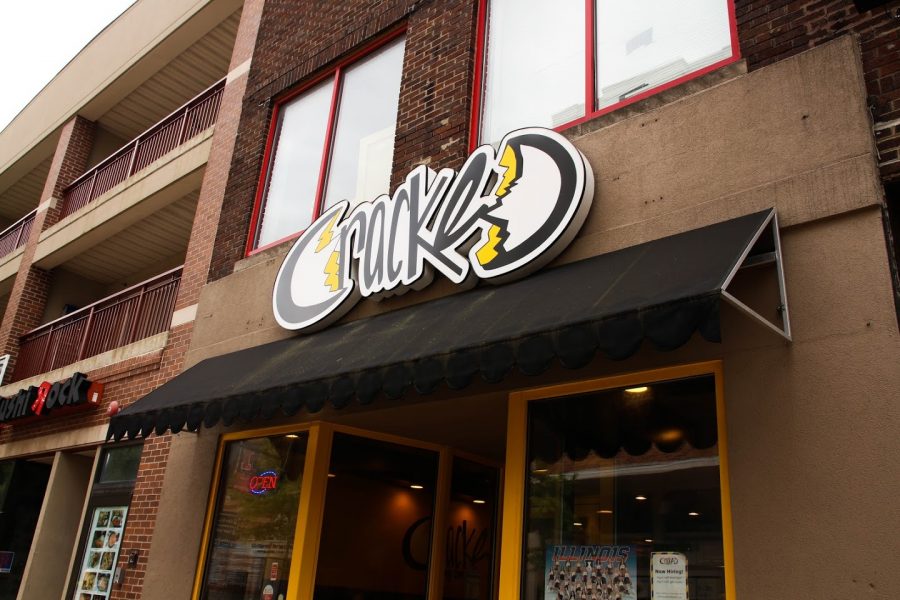 The exterior of Cracked on Green Street on Saturday is pictured above. The business, founded by University alumnus Daniel Krause, announced plans to expand to Chicago.

Many know the Green Street restaurant Cracked: The Egg Came First started in a small food truck run by owner and University alumnus Daniel Krause. The business has recently announced its expansion to the Wicker Park neighborhood in Chicago.

While this expansion has been a huge step for Cracked, the road to food truck success has been littered with potholes, and the drive has been anything but easy. Krause came up with the idea for Cracked as a 2010 intern for Lettuce Entertain You Enterprises, a restaurant company in Chicago.

The idea won Krause first place in Lettuce Entertain You’s Concept Competition. Krause said he dreamed Cracked would be a fleet of 100 food trucks serving build-your-own omelets. The menu switched to breakfast sandwiches after it was decided that omelets wouldn’t be the most practical meal on the customers’ way to class or work.

“Every weekend, me and Jeremy would wake up and cook for all the guys in our senior house, and so we created a lot of really terrible stuff,” Krause said. “I remember my friend Nicky said to me while we were making some sandwiches, he was like, ‘Have you ever had cream cheese on a breakfast sandwich?’ And I was like, ‘No, that sounds heinous,’” Krause said.

They tried it, and Krause was amazed.

This discovery lead to Cracked’s first breakfast sandwich, the Morning Bender, which remains one of its most popular sandwiches today.  Krause and business partner Jeremy Mandell based the entire menu around the Morning Bender, but reluctantly added a breakfast burrito, the Hungry Chief, after numerous requests.

During the spring semester before their graduation in 2012, Krause and Mandell started putting all of their ideas together and purchased a food truck. They grew their business enough to the point of needing two trucks in 2014. Even though they were on their way to their dream of 100 food trucks, two was proving to be difficult enough to break through a plateau.

“We got into this warehouse lease for five years that was too big for the operation. And we had two trucks that (were) not pulling in nearly enough money to basically cover the overhead that we just expanded into,” Krause said, adding how it got so hot in the summer that the temperatures were “murderous,” and there wasn’t nearly enough ventilation in the trucks.

The business began to flourish once Cracked moved into its storefront on Green Street during August 2017.

“I was worried because people think the restaurant industry game is so much harder than the food truck game,” Krause said. “People try to do this all the time, and food truck owners don’t know what they’re getting into.”

“My coming to realization after all of it was that this was so much easier than running a food truck in every single way.”

The storefront was more reliable for Krause; walking in and being able to use electricity and having access to a propane line for the deep fryers were amenities they couldn’t always rely on in the food trucks.

As Cracked became busier, Krause was able to hire Lewis Nisbet, the co-owner and general manager for Cracked in Champaign, in August 2018. Cracked is Nisbet’s debut in the restaurant industry, but he has used his background in business to help the company grow, adding how he hopes to beat  last year’s sales record by filling in the “dead hours.”

“We’ve got the drunk people at midnight, but in the morning, it’s the professors and it’s young professionals, and it’s construction workers who are doing all of these crazy construction processes on campus, and I think just filling in the hours that we’re not supposed to be busy,” Nisbet said.

Nisbet also said the general attitude in the restaurant has greatly improved since he started in Champaign.

“The environment and the atmosphere and the non-friendliness toward customers and everything else and I just said, ‘I would rather work this shift by myself than have these two people in the building,” Nisbet said.

“And that was one of the things that I took upon myself because I cared so much about the company,” Nisbet said. “I will do this whole shift by myself just because I care enough to make everyone that walks in there happy, and I think you’ve got to bring the same sort of people on board.”

One of those people included Cracked night shift manager Demarlo Hatchett. Hatchett was drawn to Cracked as an opportunity to pursue his love of cooking when he moved to the Champaign area in August 2018.

“I never heard about it, but I heard about it when I was at Pizza Hut, and they were talking about a breakfast place, and they said there’s a store called Cracked, and they serve really good food with tater tots, breakfast sandwiches and breakfast burritos,” Hatchett said. “Grilled cheeses and soup? I said, ‘Wow!’ I thought they must be doing something big, so I had to bring myself down there and see what they were all about.”

Hatchett said he enjoys his job and the customers that come in. He’s inspired by bosses Nisbet and Krause and is optimistic about the future of Cracked.

“Not one time have I ever had a problem with any one of my coworkers,” Hatchett said. “Everybody is really mellow, and everyone gets along with the customers, and I think that’s really what makes the customers want to come back more.”

As for the future of Cracked, Krause is hoping for a soft opening of the Chicago Cracked in three weeks and a hard opening the first week of October. While it was a “dream” to bring Cracked to Chicago, Krause still hopes to expand to his hometown of Evanston.

From there, Chicago neighborhoods Pilsen, Humboldt Park and the Loop are potential candidates as well as Madison, Wisconsin, and New Lafayette, Indiana. Even though the business hopes to grow, the owners will never forget their roots in Champaign.

“When you spend $50,000, are you going to see a return on your investment? And that was the best money ever spent,” Krause said. “Even if the Champaign restaurant didn’t bring in the type of return I’d want, it solidified what the restaurant is and needs to be.” “Champaign is fabulous. We wouldn’t be where we are today without Champaign-Urbana and U of I projecting us to our success.”