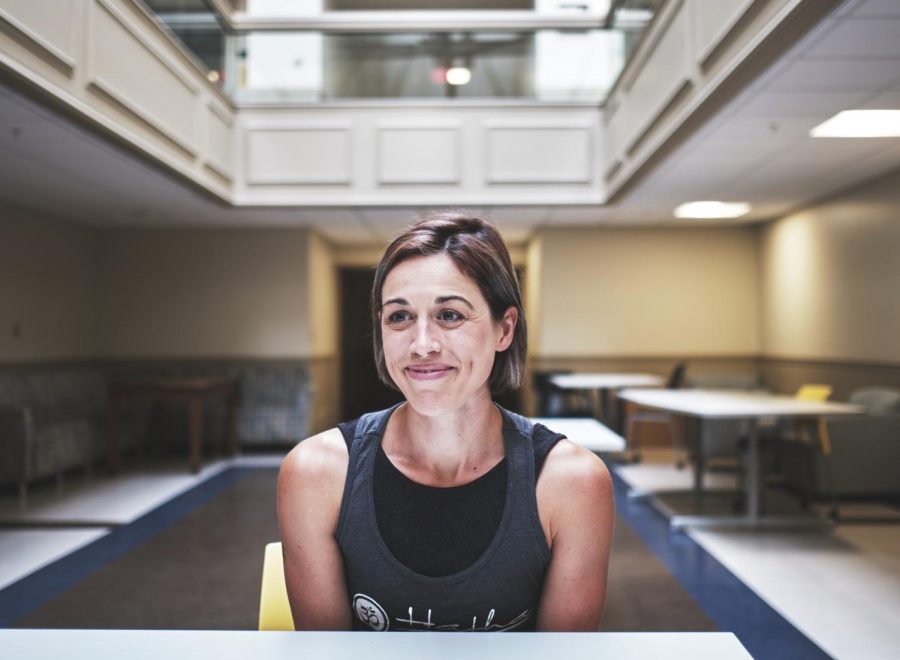 Kristina Reese speaks at the English Building about her experience guiding the Illini Football team through yoga exercises. Lou Hernandez, head strength and conditioning coach for the Illini football team, asked Reese to teach the football players about yoga and its benefits.

Kristina Reese has been teaching yoga full time for four years, and as a native of the Champaign-Urbana community, she likes to say she brings balance to the Midwest. Lou Hernandez, head strength and conditioning coach for the Illini football team, recognized Reese’s passion because he participated in some of her yoga sessions and asked her to instruct the players in some sessions during the offseason.

During Hernandez’s first tour here at the University from 2005-2011, former players would come back to campus, he said, particularly offensive linemen. One of these players was Tony Pashos, who was playing for the Baltimore Ravens at the time.

“Tony Pashos was a big lifting guy,” Hernandez said. “He was always in the room working out, and there were times when he started to miss some days. So, we were like, ‘What’s going on with Tony?’ You know? And he’s enormous … just a very impressive looking guy. So he said, ‘You know what Lou, I’m starting to do yoga.’ So I was like, come on, really?”

But Pashos told Hernandez yoga was the best thing he has ever done for his body, not just in terms of mental recuperation but his entire range of motion.

“Football is a train wreck, you know,” Hernandez said. “Every time you’re making contact, these guys are beating their bodies up. So, the more they can do with rest and recuperation, the better off they’ll be down the long run.”

Hernandez then decided yoga might have a place for the team at that time, and upon receiving positive feedback from the players, he has made yoga an integral aspect of all his coaching endeavors. When Hernandez returned to the University this year, he found Reese at Hatha Yoga and Fitness in Champaign.

“The yoga was a privilege, meaning that the athletes had to earn the opportunity to do yoga,” Reese said. “We quickly found out that everyone really wanted that privilege, and they really are active and attentive yoga students.”

Reese said the players were surprised at the difficulty of the yoga upon starting instruction but at the same time saw the value in it.

“The breathwork, the meditation and the focus really are valuable when they get onto the field in building that sense of one camaraderie and checking in with the team,” Reese said. “But also checking in with themselves, breathing freely and being really connected so that they can make the best decision in the game.”

As a former college cheerleader, Reese recognizes the impact that a competitive background and mindset can have on a yoga student.

“With yoga, you’re not going to win,” she said. “You can’t win. You’re not trying to win. It’s really just about being in your body and in your mind at that moment,” she said.

Although he had never taken a yoga class before, sophomore and offensive lineman Kendrick Green said he loved doing it with his teammates. It did, however, come with its challenges.

“I’m big, and just holding myself up like that is really, really difficult,” Green said. “Your arms burn, and it’s such a workout, you’ll sweat for sure … It’s definitely necessary though.”

Senior and tight end Justice Williams said “yoga is hard for a bunch of big guys that can’t bend.”

However, since Hernandez returned, Williams said he brought a level of seriousness to the strength and conditioning program as well as the yoga instruction.

“There wasn’t any laughing, we were just locked in for the whole 45 minutes (Reese) was there,” Williams said.

Practicing yoga on a regular basis has given Williams the ability to now sit nearly cross-legged, which he said was his favorite part of the experience.

In working with the team, Reese has noticed an improvement in the players’ ability to relax into a space.

“In yoga, a lot of times, at first people maybe think about the poses themselves, but what builds on the poses is the breathing,” she said. “I’ve definitely seen changes in how they are able to breathe and be connected and in the moment.”

Reese said practicing yoga can be beneficial for all types of athletes as well as the general public by trying to bring about resilience, a balance of breath and helping people be present.

At the end of the yoga session, Reese said she will often lead the class in a breathing meditation called Shavasana as a final relaxation.

“What’s so amazing is to see these high-class athletes that have so many demands on them academically, athletically, and to see them come into a state where they get to relax,” she said. “Where it’s like, OK, you get told what to do all the time, you’ve got a bunch going on, but now, in the most positive way possible just be nobody, do nothing.”