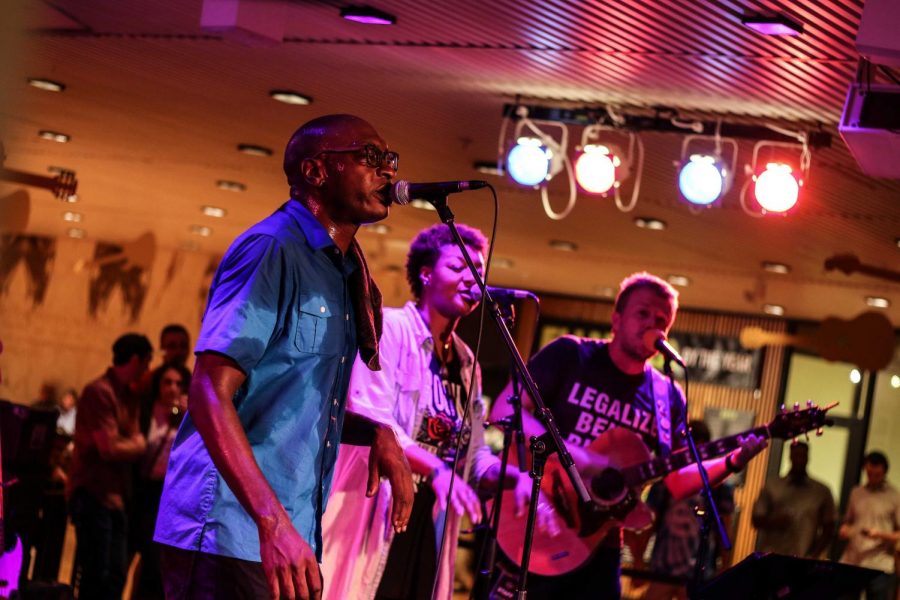 Brandon T. Washington and friends perform at the Krannert Center for the Performing Arts on Saturday. The annual guitar festival hosts a variety of acts which draw crowds from all around the C-U community.

Drums, a guitar, a pair of maracas and a voice. These elements came together under blue and purple lights to make up the band Sávila, named after the Spanish word for the aloe vera plant, who played at Krannert Center for the Performing Arts on the last day of the Ellnora Guitar Festival Saturday afternoon.

The festival ended Saturday, and its acts managed to draw crowds until the very end.

Brisa Maria Gonzalez, Papi Fimbres and Fabiola Reyna put on a show characterized by rhythmic beats and haunting vocals in Spanish and English.

Gonzalez, the band’s lead singer, punctuated the music by stomping her feet on the ground and seemingly let the music carry her movement as she swayed her long dark hair back and forth.

The audience, however, did not care to dance from the beginning of this early afternoon concert, to which Gonzalez said she knew they were all “dancing on the inside.”

Toward the end of Sávila’s show, one enthusiastic audience member gave in, got up and moved at the very front of the stage, prompting three other festival patrons to join in.

“It’s such a privilege and honor to be able to connect with people, just about music,” Gonzalez said after the band’s final bow before leaving to play a show in Chicago later that day. “Just the way that guitar brings together so many different people and so many different cultures is really a beautiful way to connect.”

Across KCPA’s lobby, another performance brought Latin culture to the festival but in a very different way.

The Danilo Brito Quartet hails from Brazil, and audience members sat around small tables in the dimly lit Studio Theatre eating Chex Mix while waiting for the musicians to take the stage.

When they did, four men clad in suits and ties sauntered in with their unique instruments.

Brito himself carried a bandolim, a Brazilian version of a mandolin, while his fellow performers wielded a six-string guitar – like most used in the United States – a seven-string guitar and a pandeiro, a percussion instrument.

Brito interacted with the audience through a translator – after bashfully admitting he does not speak English – in between most songs to explain to the audience where exactly the music they were hearing came from.

Choro, meaning “to cry,” is the name of the style of music the quartet played. Brito described it as the most rigid style of music in Brazil, born around 1870, and many other styles of Brazilian music came from choro.

Despite choro’s melancholic name, much of the music played by the quartet was buoyant and fast, with Brito’s solos triggering applause from the audience.

“You can be sure that each note is played with the heart,” Brito said. “It is an honor to us to play to an audience which has an open heart also.”

Ellnora’s very last performance, conveniently named “Last Call!” featured Brandon T. Washington and friends. People came out with their own friends to line up at the bar, get front row seats or listen from farther away.

Washington, a local music educator and ACE Teacher Award winner, began his show by encouraging people to get up and dance, reminding audience members “it’s OK to move your body.”

The group played some covers of popular songs like Prince’s “When Doves Cry” and original works as well, all being well received by the audience and inspiring applause, singing along and full-on improvised couples dance routines.

Washington himself was so energized on stage singing, dancing and playing with such fervor that he perspired through his clothing, wiping himself off with a towel along the way.

Brandon Narcisse, senior in ACES, and Victoria Susberry, graduate student in psychology, are KCPA employees who both worked the festival yesterday.

“(The festival) is actually pretty good for the community, honestly,” Narcisse said. “You just see everybody the first day … It just seemed like everybody had, like, a great time and was happy just to be here and to socialize with other people in the community.”

“I like to dance,” she said. “I like to see people happy and enjoying and interacting with each other. This is just a really good space for that to happen.”