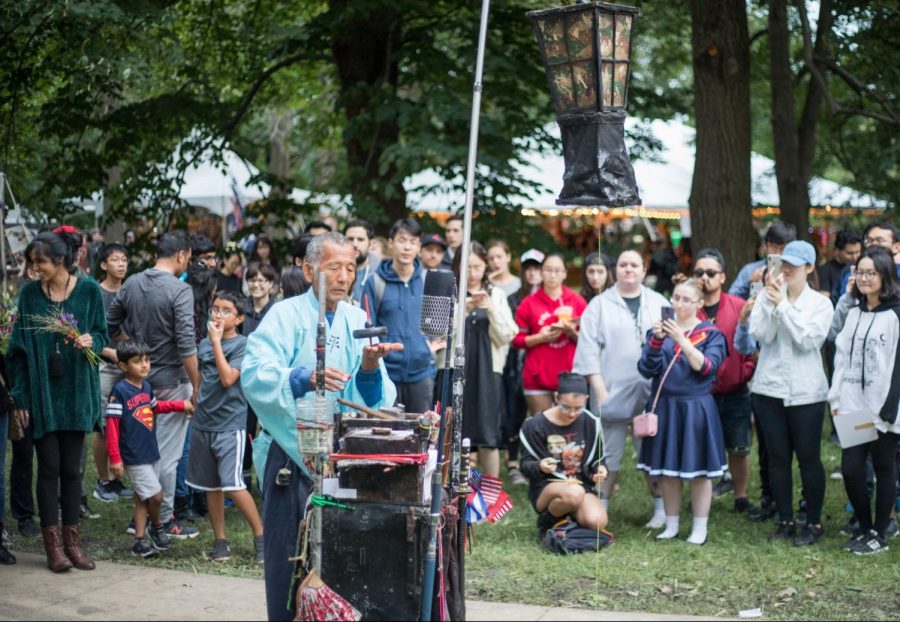 A performer spins a top on his hand in front of a crowd during Matsuri on September 9, 2018.

“Matsuri is the Japanese word for a festival or holiday,” Darin said. “In Japan, these festivals are funded by a local temple and can even be secular sometimes. It started off as something solemn, religious almost, but these days brings people together to celebrate the end of summer with food, performances, art, crafting and dance.”

He said he is more excited for this year’s festival. They expanded the celebration to include Indian cuisine, traditions and food. In the past years they have hosted it at the Japan house and the Arboretum and focused a lot on East Asian Cultures. This year they figured they would expand to include more of Asia.

This year’s Japan House Matsuri festival supported over 25 different food companies providing a wide range of food for all the attendees. Local Urbana and Champaign restaurants like Sakanaya, NAYA, Aroma and many more brought delicious and affordable Asian-inspired dishes and drinks to the masses, also featuring a limited-edition Japan House brew from Triptych Brewing.

Darin said, “We have a large number of stalls and sponsors from Urbana and Champaign itself, and we were quite determined to keep it like that; however we still had to get in a restaurant from Bloomington for our Indian Cuisine.”

All the attendees were encouraged to wear traditional clothing like yukatas, kimonos, sarees and hanboks. And even if you didn’t have the attire for the occasion, numerous stalls set up all over allowed everyone to dress up accordingly for the day and dive into different cultural experiences. Wandering the vicinity of a matsuri booths selling souvenirs, trinkets and food, everyone could indulge in mini games like Goldfish scooping, Karaoke singing, sumo matches, Mehndi and calligraphy tattoos.

Akshit Gupta, a sophomore in the college of engineering, spent the entire Sunday at the Grainger library studying for classes and headed for the Japan house at the promise of fireworks.

“I was really taken back at first at the extent of the festival,” Gupta said. “I’d been a Grainger all day, and I just popped here because my friend said there would be fireworks, but I definitely didn’t expect this much. There was a band playing actual live Japanese, I think, music, so many food stalls with food I’d never even heard of before, and to top it all off there were fireworks!”

Vedant Agarwal, Gupta’s close friend – also a sophomore in the college of engineering – was specifically drawn to the music. “I like a lot of hip hop and rap, people like A$AP Rocky and Lil Uzi Vert specifically, but when we arrived they were playing some swing rock sort of thing, and damn! It got me moving.”

Returning for their 2nd year, the crowd favorite international Japanese all-female band the 5. 6. 7. 8’s were the very ones who got Agarwal and everyone else present grooving. The Japanese rock trio, whose music is revolving around surf music and rockabilly frequently cover songs from American rock and roll.

Oishee Nandy, a sophomore in the college of engineering, was very excited to attend the tea ceremony. “I really wanted to attend the tea ceremony,” she said. “But I had so much work I just couldn’t come. I’d been reading up on it for a considerably long time; your robes, your posture when you sit, your posture when you drink the tea, what kind of tea it is- everything seemed so enamoring to me.”

Although Nandy couldn’t attend the tea ceremony, she did witness several other performances.  Watching young children earn new belts during the martial arts demonstrations made her reminisce about when she used to go to Taekwondo classes herself.

Rohan Ramesh, Nandy’s friend in the college of engineering, had a particularly good time watching a street performer. Known simply as the “The Candyman”, Ramesh spent a long time watching his candy figures and perform his own set of tricks and magic.

“I like his performance so much that I need to buy something to remind me for the festival for my new apartment,” Ramesh said. “There was this store, Ikebana, were you made these little flower bouquets. I bought one for my room and I took it back, I’m not sure how long it’ll last, but it’s something to keep. I wanted to get these cool calligraphy tattoos that they were doing, but I refrained myself, because broke college students, right? But at least I got to see the fireworks, and man, was that a sight to behold!”