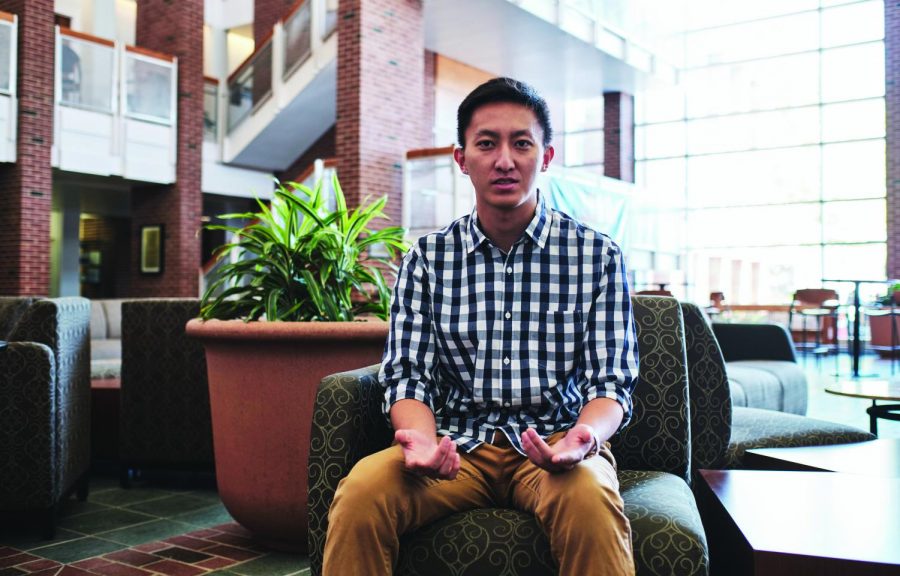 Leo Lee, president of the Illinois Trial Team, speaks about the team at the Law Building on Friday. The ITT is a competitive mock trial team that competes in eight tournaments around the country throughout the year.

Genevieve Severini, junior in LAS, first got involved with the mock trial team in high school. While attending the annual state mock trial tournament held at the University, she met the Illinois Trial Team (ITT) who were helping run the event. It was then Severini knew she wanted to be part of their team.

The ITT is a competitive mock trial team that simulates court hearings, giving students the opportunity to be attorneys, witnesses or both. When Severini finally arrived on campus, she sought out the team after watching them for years.

“It was the one booth on Quad Day that I knew I wanted to see, so I made sure to find them,” Severini said.

The ITT has four different competitive teams with different skill and competitive levels: blue, orange, silver and gold. The blue team is considered the most advanced and also the most competitive. Severini was on the blue team last school year. The orange and silver teams are still competitive, and the gold team is a developmental team for those who want to try out mock trial.

At the beginning of each school year, the team hosts tryouts. On the first day, the ITT hopefuls must do a direct examination and perform a monologue. The second day is more team-oriented, having the potential members work in groups of 10-12 people.

Following tryouts, the team moves into the invitational season, where they test and experiment to see what works and what does not.

Last year, Severini and the team traveled to the University of California, Los Angeles, for a competition. Usually, the competition starts early Saturday morning and resumes in the evening, but this time the competition did not start until 5 p.m.

“That morning, we went to the Santa Monica Pier and got breakfast,” Severini said. “That little part was like a vacation before we started competing, which was nice.”

Leo Lee, senior in LAS, is the current ITT president. Lee was also a part of his debate team in high school and came to the University as a pre-law major.

“I found mock trial to be something competitive and nationally recognized, so it seemed perfect for the drive that I wanted to have for college,” Lee said.

As president, Lee manages everything the executive board does. He also looks after the finances of the team and room rentals in addition to making sure the team is prepared.

Lee, who has since decided to study economics and communications finds the trial team still offers a large number of benefits and learning opportunities to students who are not majoring in law.

Last year, the blue team took home first place at Iowa’s competition, and it has big goals for the 2019-2020 year.

“This year, we want to make nationals, and although that might seem optimistic to some people for us, we think it’s totally capable, and having a mindset knowing that it is achievable helps motivate other team members,” Lee said.

The ITT practice two to three times a week for three hours at David Kinley Hall. Members learn and get feedback from law coaches.

Lazaro Aguiar, graduate student in law, is  one of the law coaches for the team. As an undergraduate student, Aguiar was on the trial team, so he is familiar with the format of the competitions. He tries to teach the team material and information not covered in classes at the undergraduate level.

Aguiar, who played football as an undergraduate, lets the sportsmanship he learned as an athlete be a guiding principle to how he helps the ITT.

“If we can slow down the pace of a trial similar to that of a basketball game, you can see things more clearly,” Aguiar said.