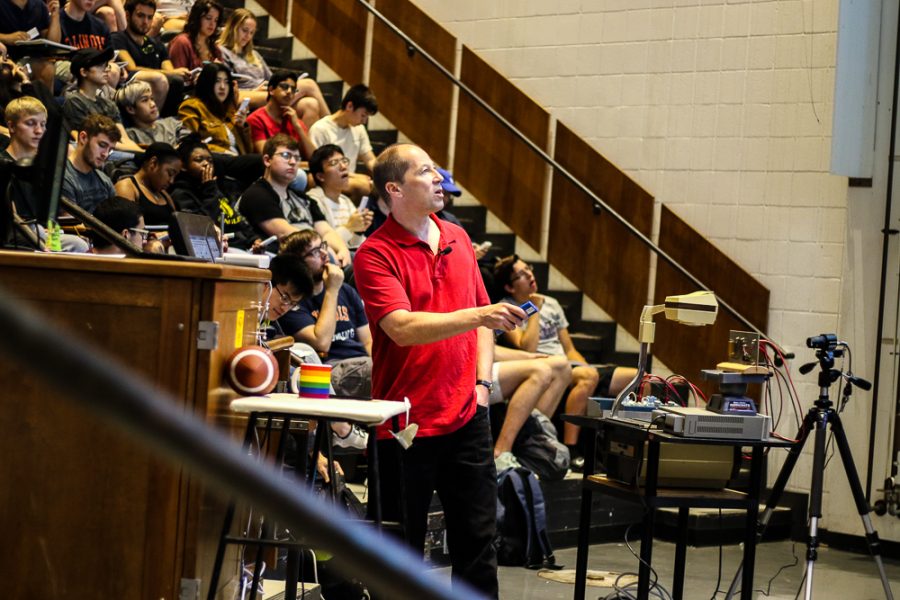 Professor Timothy Stetlzer sets up an iClicker question for his Physics 212 class in Loomis Laboratory on Tuesday.

Professor Tim Stelzer, a member of the research team that developed the iClicker, said lectures before the iClicker were very different.

“We had traditional lectures with no interaction whatsoever,” he said. “Then, we said we should break them up with clicker questions, but we didn’t have iClickers.”

He said the professors would give the students lecture handouts that said A, B, C, D and E. When the professor prompted them, the students would raise up the handout corresponding to what they thought the answer was. Stelzer said the first week went well, but by the second week, they would only do it once or twice.

By the third week, Stelzer said since the students were not held accountable, could not get credit and faced the social stigma of no one else participating, they stopped interacting. The professors switched to electronic options where they could give people points, but the technology was bad because you had to point the device at something small and press a button.

He said lots of times, votes wouldn’t go in, so they had to devote a screen with different checker boxes and see if the vote got in. Stelzer said it was a nightmare, and people would spend all their time trying to look at the screen. Nobody was thinking about physics. Eventually, they just took the existing technology of a car door and a key because you didn’t have to point at it; you would just get close and press the button.

Siddharth Kandimalla, sophomore in engineering, has a 2 p.m. lecture with Professor Stelzer.

“I really like his lectures because it kind of keeps me on my feet. I had Physics 211 last semester, and I’ll be honest with you, I accidentally fell asleep in the class at least thrice,” he said. “The way I see it, the iClicker questions really help me be engaged with the professor and the whole class.”

Kandimalla said he felt the strict no-phone or laptop policy during lecture helped him focus. If the policy was not imposed, he would be easily distracted, which would be a problem during this lecture where they discuss such difficult and interesting topics.

“I’m still not sure if I would rather have my phone or something else to answer questions in class, however,” Kandimalla said. “Sometimes, I don’t make it in time to class, and I have to sit in the back, and I can’t see the questions. So I guess there’s always a trade-off.”

“My goal is to generally have the iClicker question at around the 10-minute mark because students are human, so I try to be engaging and make jokes and stuff, which I think I’m reasonably good at it,” Stelzer said. “But even so, 15 minutes in, people are just dying in there. But then you ask that clicker question, and suddenly, instead of the energy of one 50-year-old professor, you have the energy of 300 college students. Energy is important for lectures.”

“If you compare the way things are in my Economics class versus my Physics class, there’s a stark difference. In my economics class, which is also a ridiculously huge class, we used Google Forms for the first week or two to vote for the questions that were raised during lecture,” Kapil said.

After the class had properly taken off and everyone had settled in, they switched to TopHat, which can be accessed through phones and laptops. He said the entirety of Foellinger has students with either their phones or laptops out.

“I’m not going to lie; I’ve done bits of my homework for other classes during lecture. I still answer the questions for the economics class, but I will agree that compared to the Physics 212 class that I have right after this, I am much more distracted,” Kapil said. “But for physics, I forget my iClicker from time to time. Another benefit having software like TopHat is that you can have questions that can be typed out like an essay instead of your standard MCQ’s.”

“Something I would love to do that wouldn’t necessarily require some sort of new technology would be to get everybody to vote for a certain question and to be able to see where everybody is sitting because then I can see in which section the majority of the answers that I’m getting. We’re not there yet, but we will eventually get there.”