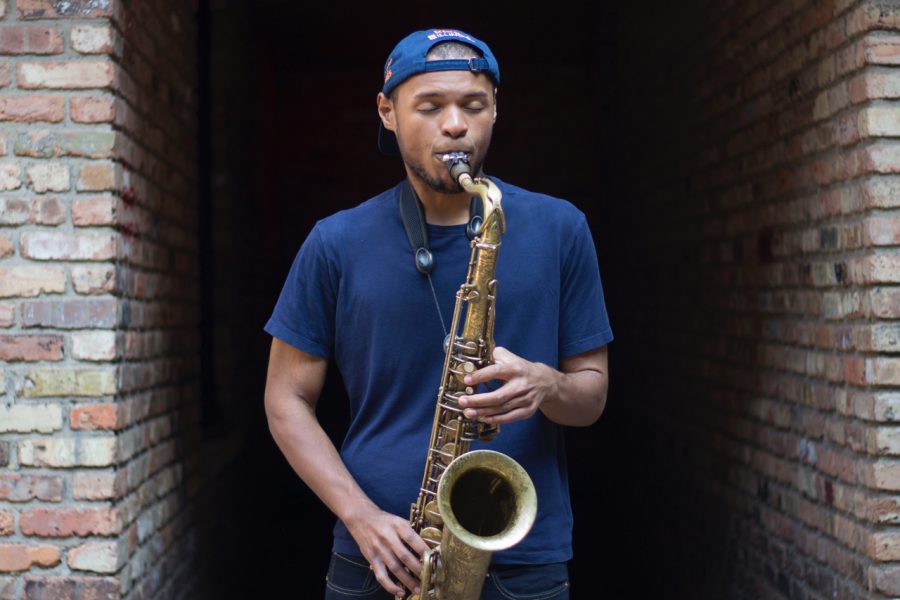 It’s Monday at 9:17 a.m. on the intersection of the Undergraduate Library to the Main Quad. As students scramble to their morning classes, the sound of a deep, compelling saxophone leaves some smiling as they continue on their way. For most students whose days are set up for stressful and hard work, the sound of one student’s morning saxophone can compel them to relax.

A senior majoring in jazz studies at the University is “Saxophone Man” Kevin King. Fluent in four instruments: saxophone, clarinet, flute, piano and currently learning the oboe, he hopes to pursue music after he graduates this spring.

The Daily Illini: What inspired you to play so many instruments?

When I was very young, around age three or four, my parents wanted me to play piano at our church, so they sent me to a school of music where I started taking gospel piano lessons. I didn’t play saxophone until I was six or seven. I remember when I was young, I didn’t really like piano that much and remember in elementary school an intercom saying, ‘Would anyone like to be a part of the jazz band?’ And I thought to myself, ‘I should go check that out’. I didn’t know what instrument I wanted to play. I said guitar! And they said, no we have too many guitar players already. They said what about the tuba? And I said no. And then they were like, okay, well, what about the saxophone? When they demonstrated, I thought, ‘Wow that sounds really cool!’ Although I sounded awful, I knew it was for me.

DI: You play a wide variety of instruments, Kevin. Is learning an instrument like learning a language?

Being a great musician helps you go from one instrument to another. There are similarities, for example, in the way you can finger one instrument to another. In this way, they are kind of like instant replicas. I picked up the clarinet junior year and the flute senior year. I didn’t pick up the oboe until last year; it’s my newest instrument. I also know how to be a beginner. I was a beginner at piano and clarinet at one point. It is difficult, but I am used to taking a step back and humbling myself to learn a new instrument.

DI: What inspires you to wake up to play sax by the UGL?

I really like practicing outside … It is like an acoustic stage. When practicing inside, the sound bounces off the walls. It gives you the illusion that you have a big sound, it gives you a reflection. But when you are outside, there is nothing for the sound to bounce off of. If you play outside, then when you go back inside the sound gets bigger. It’s sort of putting a weight on your back and then once you take the weight off you think, ‘Wow, that wasn’t so bad’.

DI: Do you ever get stage fright?

I’ve been playing in front of people since I was five or six and don’t think I was ever afraid. I always thought, ‘Oh, people are watching! I can play my best in front of them.’

DI: How does playing music make you feel?

It gives me a feeling of freedom. I feel like I’m a superhero. When I’m playing the saxophone, I feel like I’m Superman, and I’m flying in the realms of notes and all this stuff. I don’t know how to describe it. I feel hopeful. When I read the newspaper and there’s all this bad stuff going on in the world, I really feel like I can make a difference with my instrument.

DI: What has been one of the most memorable gigs you have played in?

I have a lot of memorable gigs. One was I played with Buddy Guy when I was a sophomore in high school. I learned a lot from that gig — one, I learned you don’t have to play a lot of stuff to make people feel something. I was young, hungry and I was playing out of control. You know sax, you play fast. And Buddy told me, you don’t have to do all that. Another memorable one was playing for Jennifer Hudson: a horn section gig, the Bruno Mars kind of stuff. I was playing a gig at Ravinia, a stage that wasn’t as big as hers, but still big. She heard me playing, and we exchanged information. She called me after, and I had to unfortunately turn down the opportunity to play for her because I had another gig. If I have another commitment to something, I will not turn it down for anything.

DI: What is your opinion on the music program here at the University?

One of the greatest in the world. Our Jazz program is ranked one of the best. When I first came here, I had several offers and the main reason why I chose here is because they gave me a full scholarship. I come from a family who has grit and will say you have to go to college and pursue your dreams. I even turned down Julliard when I really wanted to go. I am happy I choose this place and feel like I’ve gotten so much better.