Antoni steps out of the kitchen, onto the stage 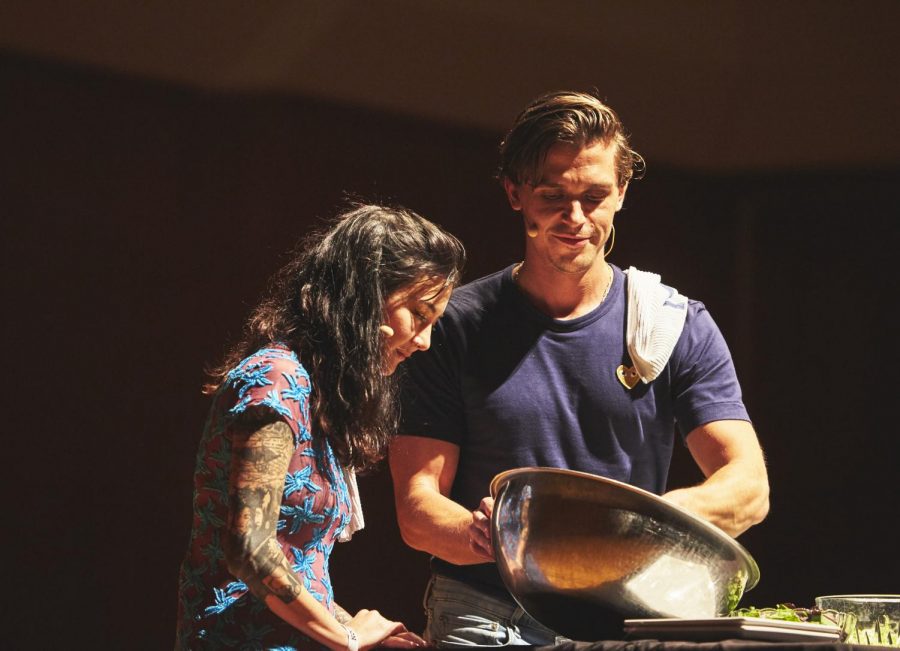 Antoni Porowski and Michelle Zauner make a salad during a cooking demonstration. Porowski brought his expertise to the Krannert Center for the Performing Arts on Friday.

Antoni Porowski, food and wine expert on Netflix’s Emmy-award winning reality series “Queer Eye,” spent an evening at the Krannert Center for the Performing Arts during the Pygmalion Festival on Friday. Porowski entered Foellinger Great Hall and began a discussion moderated by Michelle Zauner of Japanese Breakfast. He then switched gears halfway through the hour and performed a cooking demonstration for the audience.

Pygmalion Festival was the last U.S. stop on Porowski’s tour for his new cookbook, “Antoni in the Kitchen.”  The book has remained No. 2 on the New York Times best seller list for two weeks now, and his tour spanned 11 American cities.

His next stop: Montreal, the city of his youth, where Porowski said his step-mother will greet him with “not one, but two pies.”

Porowski candidly shared anecdotes from his childhood, centering largely around how he became the person he is today and why food means so much to him.

He spoke in somewhat “Catcher in the Rye” style tangents, but the audience laughed along with his stream of consciousness. When Porowski explained his tendency to wander off topic came from having been diagnosed with ADHD, an audience member cheered, to which Porowski exclaimed “Yes, ADHD!”

As a child growing up in Canada, Porowski was introduced to all types of cultures and cuisines at his elementary school, where an annual “Buffet of Nations” brought foods from his classmates’ respective cultures.

Being the child of Polish immigrants, Porowski said he often brought “weird food” to eat for lunch, which was accepted by his classmates and his school in Montreal. However, when he moved to West Virginia as a tween, his relationship with his Polish heritage changed.

“I tried to forget Polish,” Porowski said. He shared that his classmates and teachers alike could not wrap their heads around why he spoke three languages. He was also surprised to find black students and white students sat separately in the cafeteria.

After returning to Montreal to pursue higher education, Porowski said he found himself embracing his Polish culture again.

During the discussion, Zauner, whose mother is Korean, said she related to the cycle of being comfortable in one’s culture as a child, rejecting it as one grows older and seeking it out once again in young adulthood.

Topics such as therapy and mental health awareness were not off limits during the evening.

Laura Tucker, Decatur resident who was in the audience last night with her daughter, niece and great nephew, appreciated Porowski’s openness.

“He brought up mental health awareness,” she said. “It’s so important for people to realize that so many other people have a mental health issue, and that it’s OK to talk about it and just be there for each other.”

Porowski began the cooking demonstration portion of the evening by throwing a dish rag over his shoulder, as he often does while cooking on “Queer Eye,” which rendered thunderous applause from the audience.

“Everyone loves a gimmick,” Porowski said.

Alexa Tucker, Champaign resident, was in the audience last night as well with her mother Laura. She related to the show for different reasons.

“I’m really passionate about food as well,” she said. “I used to cook at a restaurant as a line cook, and I used to do some pastry work, and so I just always like hearing people’s different backgrounds on their thoughts on food and their relationship with food. I don’t know, it’s really special making food for other people, so it’s always nice to hear what other people think about it.”

Porowski walked the audience through how to make a salad from his cookbook, which he initially was inspired to create after a recent trip to Italy.

Torey Zwanzig, Bloomington resident, was also in attendance with her cousin, aunt and son last night.

From “Queer Eye,” Porowski said he has learned through mentoring people in the kitchen “not take for granted what someone knows or does not know.” During one episode, Porowski had to explain what a garlic clove was and how to skin it by pounding it using a knife and one’s hand. The subject said he had only seen this done on the Food Network, and Porowski said he felt empowered after learning how to do it for himself.

Porowski also answered anonymous audience questions, one of them being “What advice do you have for college students trying to make their mark on the world?”

Porowski responded and said to not focus so much on leaving a mark, but finding what one enjoys doing.

He told audience members, “It’s OK to change your mind, I’ve done it a thousand times.”