Townies stick with their home base while attending University 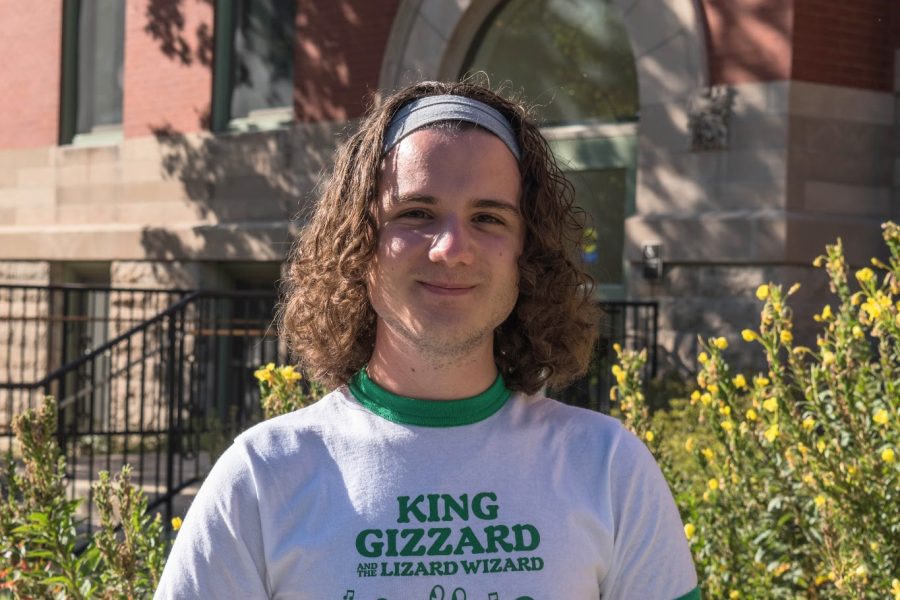 Champaign-Urbana “townie” James Kosmopoulos soaks in the afternoon sun. He stands in front of his favorite building on the quad, the Natural History Building, on Thursday.

Students travel from all over the world to attend the University. Some students, however, can walk to their parents’ houses from campus. Even those who have a lifelong history in Champaign-Urbana, though, encounter new experiences as students.

Liz Guenther, sophomore in Social Work and Urbana High School graduate, grew up in C-U. This meant early exposure to events most University students only encounter after enrolling as undergraduates.

“At Urbana High School, we were always talking about Pygmalion Fest, and our teachers were always trying to hook us up to go to the events,” Guenther said. “You could become cultured about experiences that maybe are a little more exclusive to college students.”

James Kosmopoulos, sophomore in LAS and Central High School graduate, said close proximity to campus during his high school years introduced him to University students he would eventually befriend and extracurriculars he would later pursue as an undergraduate.

In particular, Kosmopoulos’ fellowship in Daniel Biss’ gubernatorial campaign during his senior year of high school connected him with undergraduates in the student government at the University.

“I knew some people from student government who were helping out with the campaign,” Kosmopoulos said. “Meeting those people definitely warmed me up to the idea of joining student government, which I have been in since I got here. Being exposed to that kinda helped me get a jump start on organizing as a student.”

Growing up in the area also exposed “townie” students to the social culture of college from an early age.

Unofficial St. Patrick’s Day, an event sponsored by local bars in the spring and, unaffiliated with the University, is memorable for many. Liz Ramos, junior in Engineering, has a colorful memory of Illinois students during Unofficial while she was attending University Laboratory High School, or “Uni.”

“The person who came and peed on Uni during Unofficial kinda shaped the way that I thought, at least about drinking culture on college campuses,” Ramos said.

Students have a variety of reasons to stay in town for college, from financial convenience to the University’s academic strengths. “In terms of the academics I would have access to, I knew that that would be good,” said Kat Williams, sophomore in Media and Uni graduate.

Guenther also sought out the strong research faculty at the University.

“The research aspect of the U of I is incredible, and it’s something you don’t really realize necessarily going here as a townie,” she said. “Your professors can be some of the most influential forces in your field …  These are legendary people, making history here with their research … and you have the opportunity to talk to them.”

Some townies said they were skeptical about remaining in town for college; they did not know if it would be a fulfilling experience. Williams recalled feeling “existential dread” leading up to freshman year. She was concerned C-U lacked the social network for her interests in film production. Williams said she learned to be resourceful.

“You have to really create (opportunities) for yourself,” Williams said. “I think, in the beginning, it was really daunting … Now, I really like that I have to work harder for it. It makes me better.”

Williams also immersed herself in a different scene: the DIY music community. “Almost everybody I know is in (a band), or knows everybody who is in one, you know,” Williams said. “I didn’t even really know about that in high school, that that was such a big scene here.”

Maddie Rice, senior in Media and Central High School graduate, originally wanted to come here, changed her mind during high school, and then switched back again after touring the campus. She was surprised by how unfamiliar she was with the campus itself.

“I didn’t know where we were. I was so discombobulated. I was like, I’m a stranger in my own home.”

Glorian Roberts, junior in LAS and Central High School graduate, attended a different Illinois school before transferring back her sophomore year. While Roberts was initially eager for a scenery change, she decided to return because of the emotional support she knew existed in her parents and community.

Roberts said she did not realize how many aspects of her life would change after attending college. According to Roberts, she did not have as many resources at school to help her cope.

“Coming back to my hometown, I knew there were certain people or places I could rely on to help me in these transitions,” Roberts said.

Some townies sensed a stigma against staying in town for the University in their high schools.

“When you are developing your identity and becoming yourself, you want to expand,” Guenther said. “And you want to find these new experiences to develop yourself. So that can be hard to imagine in the same city you’ve grown up in and you know.”

This, however, is not always the case as with Guenther’s experience. “You don’t have to leave the city and its opportunities to experience other ways of life.”

Caterina Kim, sophomore in LAS, similarly believes the safety of staying in town doesn’t stagnate personal growth. “If you’re a townie, then most likely, your family lives here, and it is kinda like a home base,” Kim says. “If you’re sick, you can go home. In the summers, you can apply for internships if you want. You can go somewhere else in the U.S. — you can even go outside the U.S. if you want … you’re not tethered. But it’s almost like a launching platform.”

Nonetheless, townies often discover new things upon joining the University. “Being a student at the U of I is a complete polar opposite experience, in my opinion, to being a townie,” Guenther says. “I’m always learning more about resources I can take advantage of at the U of I.”

“There are lots of ways to fall in love with it,” Ramos says. “I know I have.”

Editor’s note: In a previous version, it was stated Glorian Roberts and Maddie Rice were Centennial High School graduates. The Daily Illini regrets the error.