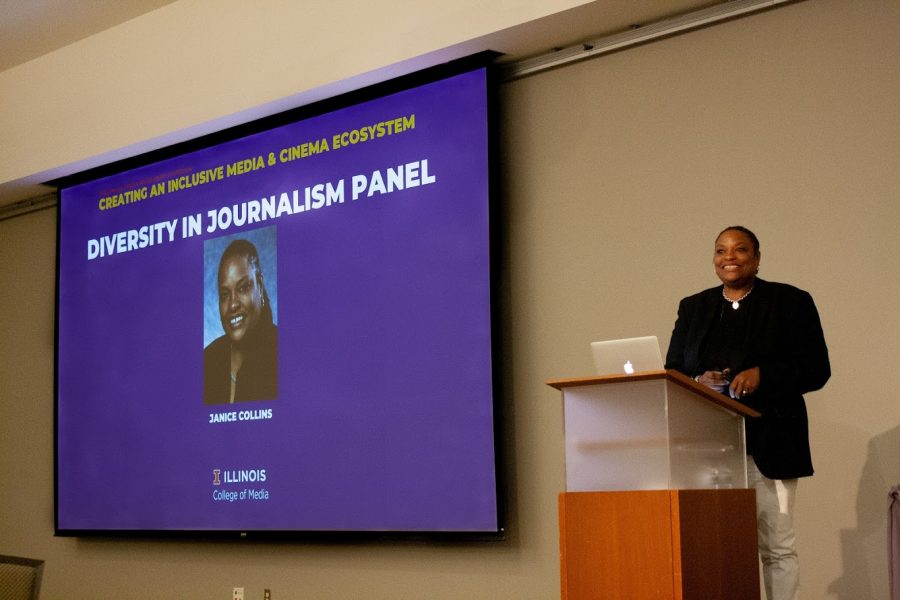 Janice Collins begins her presentation at the 2019 Chaz and Roger Ebert Symposium on Friday.

Most people can agree diversity and inclusion have not been characteristics synonymous with cinema and the media. The Chaz and Roger Ebert Symposium brought attention to this on Friday, stressing the need for different voices, faces and experiences in the media.

This year’s theme was “Creating an Inclusive Media and Cinema Ecosystem”. Chaz Ebert, the creator of the event, is most famously known for EbertFest, a famous film festival held in Champaign since 1999, which she created in collaboration with her late husband, Roger.

Ebert said that her and her husband initially just wanted to bring cinema studies to the College of Media, but six years after her husband’s death, she felt it important to expand the theme and incorporate the values she held in her life, like empathy, kindness and compassion.

“I think these are good things not just for the screen but society as a whole,” Ebert said. “It’s my firm belief that diversity and inclusion informs not only how we see society but how we can begin to heal society. I thought, ‘Hmmm, that’s what I want to talk about.’”

The symposium took place in the iHotel and Conference Center. It featured different panels that discussed diversity in film, journalism, advertising and communications.

The event also showcased a virtual reality experience that premiered a short film called “The Drive,” produced by University film students. It reenacts a police pullover through three perspectives: a black teen, a mother and a white police officer.

Ebert said she thought we would be further along with inclusivity and diversity in the media, but according to statistics, the issue is not progressing, and in many cases, it’s getting worse.

In an infographic titled, “Inequality in 1,200 Popular Films,” by Dr. Stacy Smith, the founder of the Annenberg Inclusion Initiative at the University of Southern California and keynote speaker for the symposium, shows the disheartening reality of inequality in cinema.

The study shows not just the lack of black, Latinx, Asian, LGBTQIA, women and people with disabilities on screen, but off-screen, too.

Ben Holden, professor in Media, talks about the lack of diversity in the newsrooms, delivering the troubling statistic that 83% of newsrooms are white.

Director, writer and producer Gregory Nava was also a speaker at the symposium. He is known for his movies such as “Selena” and “Frieda,” but most famously “El Norte,” which tells the story of a brother and sister fleeing Guatemala and becoming undocumented citizens in the United States, a film that is extremely prevalent today.

He said the challenges he faced early in his career are still happening today. He said some progress he has seen is great, but truly the needle has not moved.

“The issues are the same. The obstacles are the same,” Nava said. “Sadly in the 35 years since I made ‘El Norte,’ that really hasn’t changed … When we talk about inclusion, when we talk about diversity, these aren’t just academic concepts about percentages and statistics. This is an issue of life and death right now in this country.”

Although necessary, Ebert didn’t just want the focus of the symposium to be about the failing statistics of inclusion in media; she also wanted to talk about solutions and acknowledge some changes that have been made.

Smith said she has seen some progress in the film industry. There has been an increase in leads by women of color. There is a historic uptake in the number of black directors and black speaking characters. Female directors have increased, including in animation and live action, which have the least amount of women.

Smith also said that changing who is in the director’s chair is a start to tackling this issue.

“All of these things are pointing to me that we need to be incredibly specific what we ask Hollywood, we have to hold them accountable … Now the goal is pressure to accelerate change to make sure all groups have access in opportunity and Hollywood doesn’t take their foot off the gas pedal,” Smith said.

Brian Johnson, professor in Media and moderator for the diversity in journalism panel, gives advice on how people in the media can be more inclusive.

“We can be inclusive not only in our sources, but our stories that we choose to write and the pictures we choose to take,” Johnson said. “It can start with us. It must start with us for journalism to survive.”