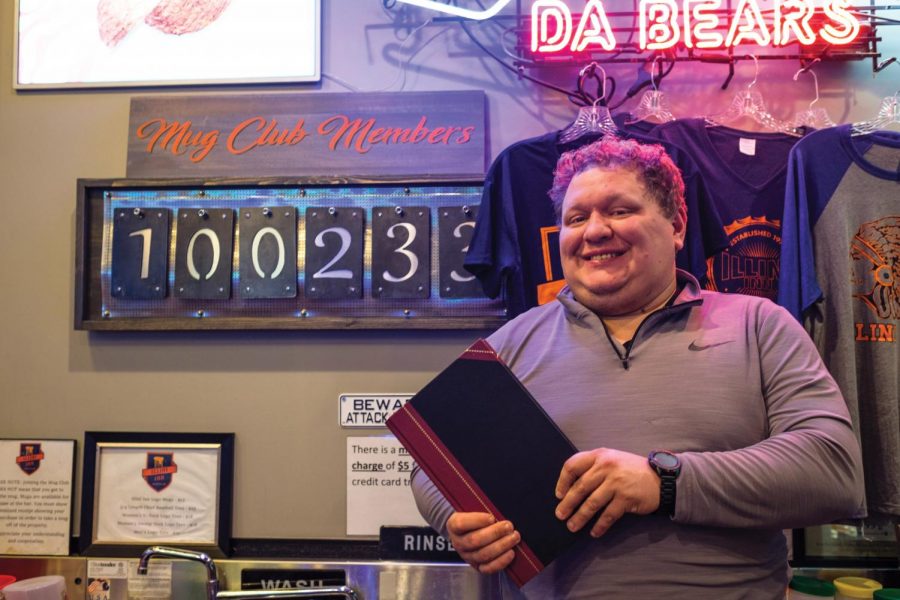 Josh Pearson, manager of Illini Inn, poses in front of the mug club sign on Tuesday

Over 100,000 students, alumni, Champaign-Urbana residents, visitors to the University and even Bill Murray are members of the Illini Inn’s Mug Club. Exclusive to this bar on campus, the group has been around since its establishment in 1970. Today, anyone 21 and over can walk up to the bar and complete a challenge in order to receive their membership card and officially be part of the tradition.

To join the club, contenders are given a card with a number on it. They must remember that number as they chug a beer, and then drink their next one normally. After this, they recite their card number back to the bartender, receive their card and gain Mug Club membership for life.

Kaylee Elliott, current bartender at the inn and shared that she has personally seen around 2,000 people complete the challenge with around 200–300 joining each week.

“At this point, it’s a hardcore tradition,” Elliott said. “You get a card and a lot of people keep those in their wallet, so it’s like a bragging right.”

Members are able to use their iconic Illini Inn mug that holds a little over a pint within the bar, making it cheaper than buying a regular beer. On any given night, you can find at least one person representing the club inside the bar.

Olivia Hosman, another bartender, however, warns that participants fail the challenge when they throw up at the bar, and she has to clean it up. She said this is more likely to happen when participants eat and then decide to try the mug club challenge.

You can reattempt the challenge as many times as you like and even rejoin again if you wish.

The bar recently reached 100,000 members this past August, and they proudly display members in counting with a giant board that is updated every day. It’s a shared experience that can be passed down through generations.

Josiah Pearson, general manager at the Illini Inn since it reopened in August 2018, said you get “to be a part of history, we’ve had grandfathers, fathers, sons, daughters, come in. We have most of the books from 1970 and on that show where they joined. They like to show their grandson or whoever, ‘look this is where I joined, you should join in too.’”

This is especially true during homecoming weekend, parents’ weekends and graduation, where as many as 800 people join. Members who joined decades ago still have the same card.

Pearson shares, “We’ve had people come in with their old cards, dating back from the ’70s.”

It’s a network of people that are spread around the world. Roger Kerlin, owner of the bar from 1979–1996, has met members far beyond Champaign. When sporting Illini Inn apparel in Switzerland, Kerlin said someone shouted the “Illini Inn mug club!” Also when receiving a tendon repair in Washington, his doctor shared he was also a member.

“You get what is now 100,000 people and spread that demographic all over the world,” Kerlin said. “It has a broad range, it spreads out.”

Kerlin has been part of the club’s humble beginning, purchasing the Illini Inn in 1979 when the Mug Club only had about 6,000–8,000 members. Back then, the bar had a different atmosphere.

By the time he sold it in 1996, the club had 25,000–30,000 members, and it continued to grow exponentially from there. Back then, the club still created a sense of group belonging. Homecoming weekend would leave the bar packed with people of all ages, coming back to walk their old stomping grounds one more time.

“The younger kids welcomed the older ones, they had something in common,” Kerlin said.

Today, the mug club remains a widely known tradition that many senior students have on their list of things to do before they graduate.

“It’s in the heart of campus; for some people [it’s] a right of passage almost, when you turned 21 you came in and joined the mug club,” Pearson said. “I think that still speaks to people today, especially when you contract over the generations where grandfathers or grandmothers pass it down to their grandchildren, it’s just an Illini thing.”