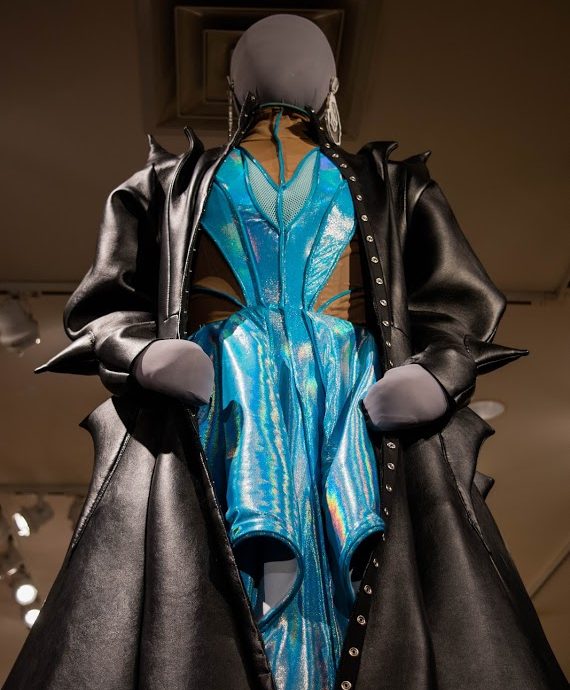 A Drag queen mannequin stands tall at the Spurlock Museum for the drag queen exhibit on Sept. 26. The exhibition, In Her Closet: How To Make a Drag Queen, puts up various of drag queens’ costumes and materials used by drag queens who are connected to the Champaign area, and gives deeper insight into why queens get involved with drag in the first place and what influences their style.

The Spurlock Museum is home to several ethnographic artifacts and keepsakes; however, until recently, the museum has been hosting an exhibition about drag queens. The exhibition, In Her Closet: How To Make a Drag Queen, puts up various  costumes and materials used by drag queens who are connected to the Champaign-Urbana area and discuss the questions such as, “How do drag queens get ‘that look?’” and “Is it just her attitude and fierceness, or is there strategy and intentional craft involved?”

Local and international drag queens made contributions to this exhibition. Since its opening, it has attracted various grioups of students and staff to come and learn more about drag queens and their community. Even though drag culture can be an unknown territory for most of the audiences, most participants are still willing to know more about them and the community as a whole.

One of the main purposes of the exhibition is to show the concept of drag costumes and how they are made. One of the challenges is to “make costumes out of cheap things and make them look glamorous.” Most of the jewelry, such as bracelets and necklaces, is made out of duct tape with crystals stuck on them.  As for the costumes themselves, some of the drag queens go thrift shopping or receive donations.

However, making costumes on a low-budget doesn’t seem to diminish the glamour. As shown in the exhibition, all the drag queen costumes have bright, bold colors and even movable objects. On drag queen Sharon ShareAlike’s costume “Monster,” there are two movable eyes that can be controlled while wearing the costume, and on queen Gioconda’s costume “The Great Empress of the Soviet Empire”, there is a shiny globe on top that can move around.

“I have very sophisticated costumes,” Gioconda said.  “There’s a lot of light and mechanical effects.”

Other than costumes, the exhibition gives deeper insight into why the queens got involved with drag in the first place and what influences their styles.

“I remember taking my mom’s bedsheets and tying them into different designs around my body,” she said.

Some of the drag queens put on costumes related to their nationalities. On Gioconda’s costume, Russian symbols represent where he is from.

Other than Gioconda, Tolentino also works the same way in representing the Philippines.

“The complex lives of gay Filipinos dealing with everyday struggles, discrimination and legibility against social norms and limiting categories,” Tolentino said. “My drag style, looks and ideas serve to highlight the lives of Filipinas, the women (who) inspire my own concept of strong femininity.”

Paul Michael Leonardo Atienza, a doctoral candidate in LAS, also works as an adviser for the exhibition. He explained why campus is holding exhibition and future thoughts for the community.

Atienza said he and a co-curator, John Musser, started to work on the exhibition in April about the drag queen costume which gave them this idea two years ago.

This exhibition is one of a kind on campus and Atienza hopes it will bring exceptional meanings to the students, campus and the community as a whole.

“I hope that this starts a conversation about the long history that we have here in Champaign-Urbana, to show that drag queens have a rich understanding,” Atienza said. “To think about what they are wearing (is) not just about being beautiful, but it is also about sharing a story through performance and through clothing.”