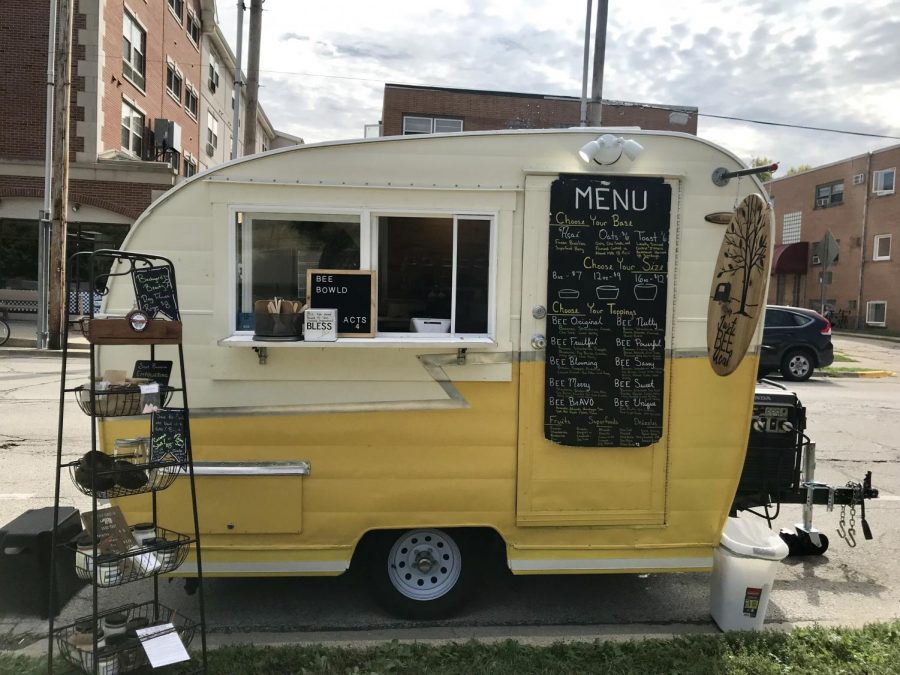 The new Just BEE Acaí food truck is parked on Goodwin Avenue and Oregon Street. The food truck has been soaring in popularity ever since its launch this summer.

On the corner of Goodwin Avenue and Oregon Street, an old camper painted with a yellow bottom and white top sits surrounded by a crowd of people waiting their turn to try the acai bowl many students have enjoyed.

Parked several places around campus as well as having an increasing presence on social media, Just BEE Açaí  has served as a safe haven for healthy-food seekers in the C-U community.

Founded this summer by former special education teacher Emma Reinbold, Just BEE Açaí said its goal is more than just serving delicious acai bowls and various healthy toasts; Reinbold views her mission as in a world where “there is too much darkness and brokenness, Just BEE Açaí hopes to be even a very dim light against that.”

She said she believes if everyone stopped living up to certain expectations, they would be naturally happier and all-around healthier. Changing her career path from teaching an entrepreneurship to follow her dream of creating something, she encourages people to “Just BEE” and “Bee You.”

An acai bowl is a dish filled with a thick smoothie base garnished with berries, granola and various other toppings. Acai, a berry, is made up of inflammation-fighting antioxidants and natural materials. Stemming from the acai berry which originates from Central and South America, the inch-long purplish fruit is known for improving cholesterol levels and reducing colon and bladder cancer.

For Katie Swanson, junior in Music who suffers from Type 1 diabetes, Just BEE Açaí has been a “healthier, sweeter option that serves as a great dessert” for her on campus.

For Reinbold, ensuring nutrition and quality is everything when choosing the ingredients for Just BEE Açaí. For example, when first starting the truck, her team looked for granola and nut butters to use on the menu, but they “could not find any they were satisfied with because they were always loaded down with unnecessary sweeteners and added ingredients,” Reinbold said.

To counter this, the Just BEE team makes its own granola weekly, loaded with ingredients such as rolled oats, quinoa, millet, chia seeds, coconut oil and local honey to ensure everything in the bowl is fresh.

With every single ingredient listed as organic, Reinbold said “nothing handed out of the window is even the slightest bit processed.”

Reinbold grew up in the Champaign community and is also a University graduate. Starting her journey with no expectations, she admits she did “anticipate close family and friends to carry them through the first seasons.”

However, she uses the words “grateful and blessed” to describe the emotions she feels about how supportive and how much attention the community has given the truck since the day it launched.

In attending Urbana’s Market at the Square, a farmers market, as a vendor instead of a consumer earlier this season, she describes how surreal the feeling of helping create a joyful experience for her community is to her.

Attending the market every Saturday as a child, Reinbold never imagined this event would be one where they would “sell the highest number of bowls” and is a day “her team will remember forever.”

Before March 2018 when she purchased the truck and was still working as a teacher, Reinbold and her parents would “casually browse for old campers in the evenings simply because it was a positive light and something that brought joy to us during this tougher season of life.”

However, once she found the 1963 Shasta camper, now named Mrs. Linda after its previous owner, on a Facebook Marketplace, she spent a year and a half restoring it and meeting health codes to get it up and running.

One of the key sources of success for Just BEE Açaí is the popularity it has achieved via social media.

Ciara Miller, junior in AHS, has had acai bowls in the past and said how excited she was to hear about the truck from “all of her friends who have come here.” Similarly, Swanson found Just BEE Açaí through her friend’s Snapchat story and decided to stop by the truck as well.