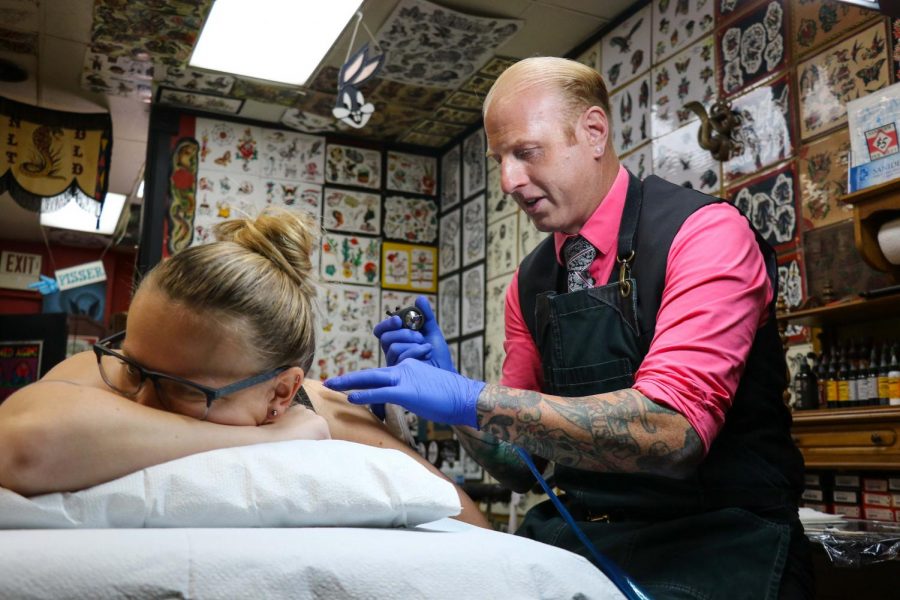 Lunchbox tattoos Brenna Kelly, sophomore in Engineering, at New Life Tattoos on Sunday. Lunchbox believes tattoos are a way of self expression and have different meanings for everyone.

Jeremiah Mukanda has wanted tattoos since before he can remember.

“My mom and my grandpa both had tattoos, so I think it normalized it in my brain, and I was always going to have tattoos,” he said.

Mukanda, sophomore in Engineering, got his first tattoo at the age of 17. It was a simple stick-and-poke tattoo. Now, six tattoos later, he can’t imagine not having them on his skin.

“I think tattoos are a really sick art form and can make you more confident when you have things you like on your body,” Mukanda said. “I used to be insecure about my legs, and once I got a tattoo on them, it (made) me feel more confident to show them, so I think tattoos can really boost your confidence. Also, they just look cool.”

In collegiate culture, tattoos are becoming a more popular form of art expression.

Lunchbox, a tattoo artist and piercer at New Life Tattoos, has seen his fair share of tattoos. Its location on Green Street especially ensures he has witnessed a wide array of tattoo requests.

Lunchbox started out at New Life just hanging around the shop and being part of the social aspect of it. He was there so often, the staff offered him an opportunity to do basic piercing. After a few years went by, they asked if he was interested in tattooing, and he has worked there as a tattoo artist ever since.

Anywhere from three to 10 people can come in a day to get a tattoo, not including walk-ins and piercings.

Lunchbox’s philosophy and approach toward work is a positive one. He said he doesn’t feel like he has to come in the shop every day to pierce and tattoo just because it’s his job.

“I feel like I get to do this every day because it’s what I love to do,” he said.

From his experience, he said different trends have come and gone, but at any point in time, some things are more popular than others.

Right now, semicolon tattoos and tattoos that focus on lettering seem to be the most popular, he said, but trends change all the time.

“It’s hard to pinpoint a certain trend because there are so many people getting tattoos and then assigning meaning to them,” Lunchbox said. “You can assign meaning to anything really. It’s crazy how you can get something that you think just looks cool on your body, and it turns out to be your favorite tattoo you have because you are able to assign whatever meaning you want to it.”

Like Lunchbox, Fox Angus, sophomore in LAS, agrees tattoos can mean so many things to different people.

Angus has three tattoos, all music and faith-oriented.

“They represent my love of playing music and the bass and my faith, but I think they show people parts of your personality that you may not usually talk about, and it’s a good way to show people things you like or just the fact that you like art and expression,” Angus said.

Angus said his favorite tattoo is one that his grandpa wrote out. It says “Sh-boom Sh-boom” because it’s the song by The Crew Cuts his grandpa used to sing to him.

If customers are indecisive, New Life Tattoos has the “get what you get box.” Customers pull out a tattoo option from a box, and the choices are often general and immediately liked by the customer.

“We’ve had a least 20 people get their first tattoo out of the box, if not more,” Lunchbox said. “It’s so general it’s perfect for people who choose to do that.”

As a tattoo artist, Lunchbox said he just likes tattooing, whether it is something sentimental or a silly drawing. He likes to be able to help people’s ideas come to life on a canvas they will always have with them.

With all the tattooing he has had done, Mukanda realizes art and expression have different meaning to everyone.

“Some of my tattoos have meanings and some are just things that I think look cool on my body. I think that’s the way it should be; art and your body is the canvas,” Mukanda said.

Editor’s Note: In a previous version, Lunchbox’s name was changed at the discretion of the source. The Daily Illini regrets the error.