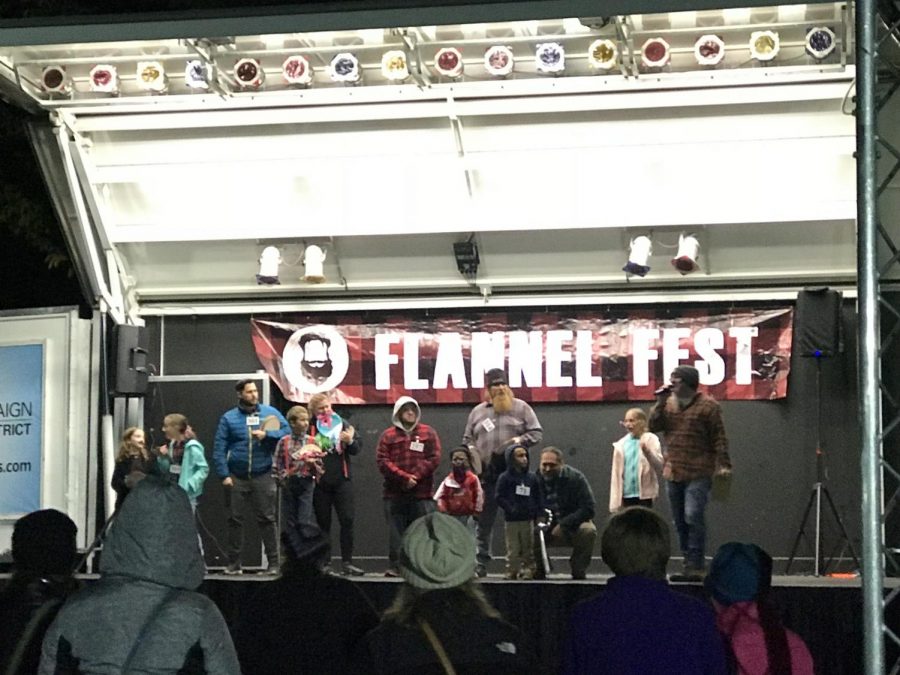 Citizens of Champaign-Urbana celebrate and engage in fall activities at Hessel Park on Saturday. Flannel Fest activities include pumpkin chucking, mustache competitions and a lumberjack presentation.

It can be easy to forget Champaign-Urbana is much closer to a small rural town than a sprawling metropolis. This year’s Flannel Fest was a great reminder and celebration of the college town’s small-town spirit.

The idea of Flannel Fest is simple: It’s a small gathering at Hessel Park where the public is invited to don their best plaid flannel shirts and spend the evening chucking pumpkins, watching lumberjacks and enjoying a mustache competition.

Attendees Jeff Bugoni and Libby Sternleagem, who live right across from the park saw the event was happening and decided to check it out. Their dog, Seiba, was the star of the “Cupid Shuffle” interlude to the mustache competition and they enjoyed the show.

With categories like best women’s mustache, best burly mustache and best kids mustache, you start to get a sense of the type of high-stakes contest this was. Constructed and real beards were allowed, and when a kid no older than 6 was found to be a returning contender from last year, an audible “aww” could be felt through the crowd.

Another staple of the Flannel Fest was the Lumberjack dash. Here, competitors test their lumberjack skills in a series of log flips, crawls and more. This year’s winner, Harry Hornboork, dressed in the classic red flannel shirt and sporting a fake mustache, was proud of his achievement.

“I did the Lumberjack Dash last year,” he said, “I got second last time, so I came this year to get first place.”

Hornboork achieved his goal, and after his victory, he showed off his small wooden trophy of what looked to be a lumberjack.

Huddled together as if to ward off the cold, was a collection of small tents manned by local businesses selling a wide variety of items, from clay mugs to beard care products. While the beard care tent certainly fit the theme with promises of smoother beards and great facial styling gels, there was not a single flannel to be purchased at the event. Instead, tie-dye shirts and scented soaps were available for purchase. The event also featured numerous food trucks.

A number of other small activities was offered to provide a fall atmosphere including pumpkin sling-shots, antler-ring toss and even a hay-bale ride. The hay-bale ride highlighted the smaller-scale of the event. The whole hayride took around eight minutes and despite a few hay bales tossed around the park at the end of the day, it was just a ride around an empty open space.

With most of the stations unmanned, families were free to wander from activity to activity at their own pace. Despite the chilling temperatures, many laughs and smiling faces were seen as pumpkins flew across the field and landed in the bulls-eye, splattering to pieces as they did.

The highlight of the whole event and the closest to a scripted performance was the Timberworks Lumberjack Show. The show consisted of one announcer and two lumberjacks competing in various events that had them jumping on thin planks stuck into small trunks to cut the tops off with chainsaws and racing each other to see who could cut off  three chunks of wood. The crowd was split into teams who and cheered out  “Yo-Ho”  anytime their competitor was winning.

The grand finale of the show was a log roll contest, pitting both lumberjacks against each other as they fought to avoid falling into the pool the log was in.

For local David DeHaven, this was the best part of the show given the temperature when the contest happened.

“It was pretty good,” he said. “The water must have been really cold when they both fell in.”

While crowd size for Flannel Fest was never overwhelming, citizens of C-U seemed to embrace the silliness of it all with smiles and laughs.