Inside the lives of alumni: Tombstones tell stories of historic UI figures 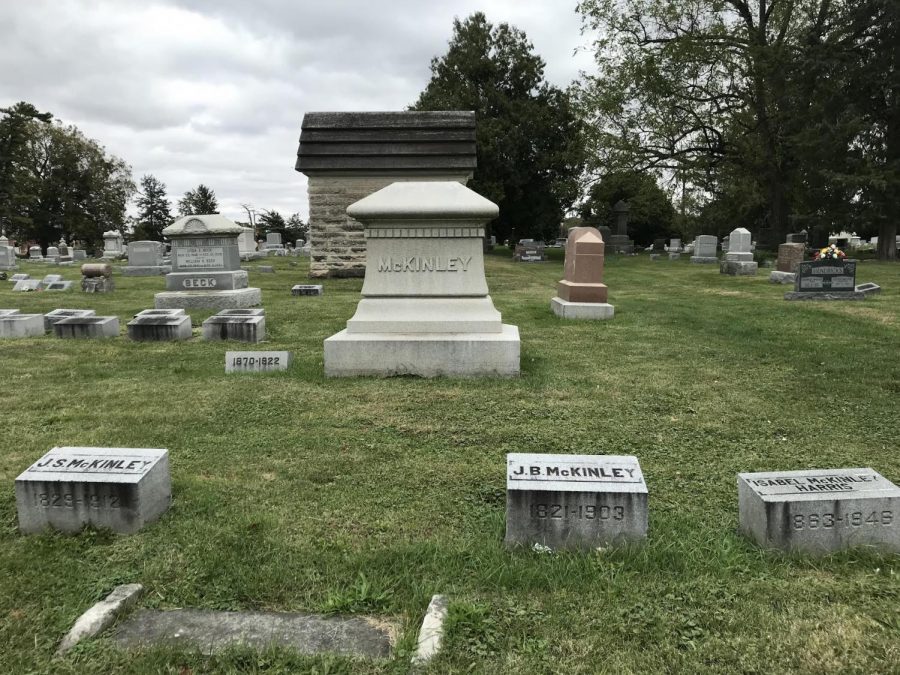 Memorials and tombstones of significant figures in University history lay within Mount Hope Cemetery on Saturday. The cemetery is located on Pennsylvania Avenue in Champaign.

As the season of spooky stories and pumpkin spice lattes arrives, the mystery behind Champaign’s Mount Hope Cemetery interests Halloween lovers. Opened 12 years before the University itself in 1855, the 52-acre land located between Pennsylvania and Florida Avenues is the final resting place of several famous University alumni. Divided into five sections — Jewish, Muslim, veterans, criminals and suicide victims — the cemetery is a standing representation of the phases of history in Champaign. As for the graves themselves, it is hard not to wonder who is buried and what their stories are.

A Champaign local and 1890 graduate of the University, Huff served as the head football coach from 1895-1899 and the head baseball coach from 1896-1919 before taking the role as the athletic director from 1901-1935. Huff went on to become the head of the Boston Red Sox before returning to Illinois. In addition to the building on campus named after Huff — Huff Hall — he is buried even with the 50-yard line and is in sight of Memorial Stadium.

Born in 1893 in Germany, Miller served as the captain in the Union Army and received the Metal of Honor for his bravery on April 9, 1865, at Fort Blakely, Alabama. His citation reads, “Capture of Flag.”

After graduating from the University, McKinley became a United States representative and senator from the Illinois. McKinley then served as a congressman in 1914 before becoming a senator in 1920. In addition to the McKinley Health Center on campus named after him, his legacy continues in the McKinley Bridge between Venice, Illinois, and St. Louis.

A legendary, All-American football player at the University, Caroline stands as one of the best running backs in Illini history. In 1963, he signed with the Montreal Alouettes and joined the Chicago Bears a year later. After his retirement, Caroline served as an assistant coach for the Illini before becoming a physical education teacher in Urbana.

Born in Salem, Virginia, on Nov. 1, 1982, Randall married James G. Randall, a notable professor of history at the University. Ruth assisted James with research for his book, “Lincoln the President: From Springfield to Gettysburg,” before going on to produce her own works. She published her first work, “Mary Lincoln: Biography of a Marriage,” before her husband’s death in 1953.

A representative from Illinois, Dobbins attended the University and practiced law in Champaign in 1909. He became a delegate at the National Convention in Philadelphia in 1936 and was elected as a Democrat to the 73rd and 74th Congresses.

Born in 1917 in Champaign, Richmond studied law at the University. Starting his college career off as a gymnast, Richmond went on to form the weightlifting team while balancing his role as a member of ROTC. A longtime University benefactor, Richmond donated millions to University facilities, including a $2 million gift to fund the construction of the Richmond Journalism Teaching Studio.

Carley, the first non-native American settler in Champaign, also occupied the first permanent house. Creating a domino effect of the residents who followed, Carley was a witness to the establishments and improvements of the city. He was also a friend of Abraham Lincoln as a member of the president’s “kitchen cabinet.”

James graduated from Northwestern University and Harvard University and served as a former president of the University from 1904-1920. He is also famous for his letter to President Theodore Roosevelt to bridge a connection with Chinese students and bringing them to study at the University. Today, the Edmund J. James Scholar Program is named in honor of his work.

Despite the marvelous accomplishments of the individuals buried at Mount Hope Cemetery, it is even more astonishing how easily forgotten their stories can be. As University students this Halloween, it can be both eerie and enduring to spend an hour taking a stroll through the cemetery in reminiscence of their impact.