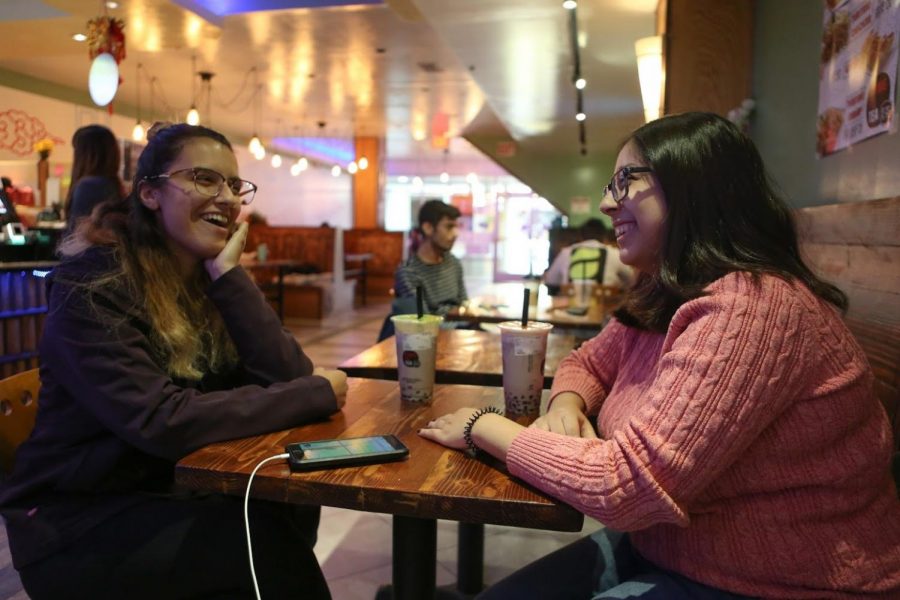 Lillian Tate, a junior in ACES, and Elizabeth Murillo, a junior in Engineering, enjoy bubble tea at Kung Fu Tea on Friday. Bubble tea shops continue to pop up around the Champaign area.

In recent decades, more and more bubble tea stores are emerging around the world, which is something students have seen first hand. A few years ago, few places sold bubble tea in the area, but now several exist within a few blocks of each other.

The drink is typically made using milk tea as a base and then topped off with a scoop of tapioca pearls, or “bubbles.”

Four of the most popular bubble tea stores on campus are Teamoji, Kung Fu Tea, Latea Lounge and Taipei Cafe.

Teamoji is located on Green Street and is run and managed by Boling Hu. He said that since their opening in 2017, they have always wanted to bring fantastic bubble tea drinks to the campus. They also bring a variety of other treats to campus.

“Cheese float is really popular in China Mainland, and the founder is the first one who brings cheese float, the topping, to Champaign,” Hu said.

With good flavor and newly introduced toppings for the tea drinks, Teamoji can be one of the busiest shops on Green Street. “We made at least 700 cups of drinks, and that’s not including the food, and not including the delivery,” Hu said a couple of weeks ago on their second year anniversary when talking about how many orders they can take around one day.

Angela Sun, senior in Business, and Melissa Hsiang, sophomore in Business, said they like the bubble tea in general, as it is a good way to relax.

“I guess it is a good pastime,” Sun said. “I like to drink it when I hang out with my friends.”

Hsiang said the bubble tea craze was due to the variety of textures the drink provides.

“For boba (bubble tea), people like chewing on things, but they also like the good taste as well, because it is very sweet,” Hsiang said.

“I really like bubble tea,” Tate said. “I’m having Taro today. Freshman year we (were) actually sitting in here a lot, but since I live not as close to here, I don’t get in here a lot. Maybe like once a week I will have some bubble tea.”

Tate and Murillo also said they think a lot of international students brought the culture of bubble tea here, and that is part of the reason why campus has so many bubble tea stores right now.

Two Chinese students sat down at Latea on Sixth Street: Micheal Jin and Rampo Zhao, both freshmen in LAS.

After having experimented with a variety of bubble teas on campus, Zhao said he prefers Kung Fu Tea and Taipei Cafe.

The group also had the same answer for why so many bubble tea stores exist on campus. “Because there are lots of Chinese students like us at UIUC,” they said.

Taipei Cafe made its way onto many people’s “favorite bubble tea location.” One customer, Avishek Biswas, fifth-year senior in LAS, said he considers himself a “Bubble Tea expert,” and he said he likes Taipei Cafe the most because of the tea quality.

“I don’t know how to explain it. It’s just the milk tea is not watered down too much, and it’s got a lot of more tea flavor, and the boba is more chewy than the other places,” Biswas said.

Another customer, Vickie Li, compared Bubble Tea to coffee. “It’s like a cafe-alternative, and a lot of my Taiwanese friends, they have to have bubble tea,” she said.

Vicky Mei, who is the owner of Taipei Cafe, gave us her insight about competition. “Competition is good. Each bubble tea shop is targeting, focusing on different products and also different clients,” she said.

She said she thinks that as time goes on, more and more bubble tea places will be brought into the Champaign area with a larger variety of bubble tea choices for students, staff and local residents to enjoy.