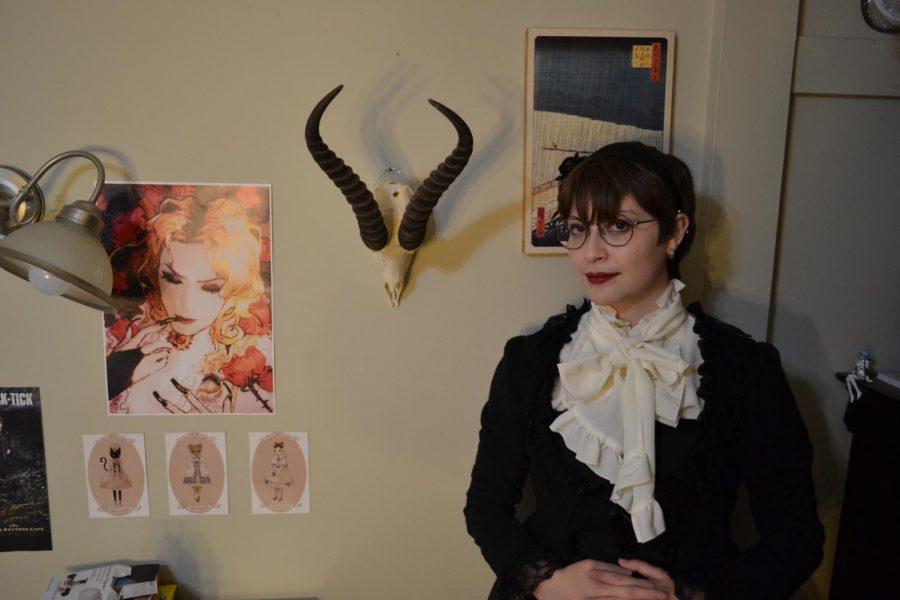 Zoe Goldenfeld poses in her bedroom. The gothic lolita style has risen in popularity, prompting University students like Goldenfeld to celebrate it in graveyard picnics.

For some fans of gothic subcultures, October is a good month for visiting graveyards.

Zoë Goldenfeld, senior in LAS, organized a graveyard picnic earlier in October. Goldenfeld and her guests exchanged anecdotes and personal recipes while sitting on an empty plot of ground adjacent to a nineteenth-century graveyard — a short drive from Champaign-Urbana. Goldenfeld said she chose the location for the meetup because it fit a spooky aesthetic thematically appropriate for October.

“It was an isolated spot where we could hang out in peace,” Goldenfeld said. “It was surrounded by an autumnal landscape that conveyed the atmosphere of the beginning of a cheesy horror movie but in a fun way.”

Goldenfeld said the graveyard she picked for her picnic is a good fit because it’s over a century old. Therefore, it is unlikely that any mourners would attend the graveyard and be offended by her group’s picnic.

“It’d be one thing if there’s a more recent grave, and you went to mourn your dead father, and there were a bunch of weird kids in black clothes listening to funky music and getting drunk,” she said. “But if somebody died 80 years ago, I think you’re OK.”

Goldenfeld’s picnic was a gothic lolita meetup. Meetups, referring generally to any event where people agree to socialize together while wearing lolita fashion, can take many forms, from scheduled events at cafes to visits to art museums. However, Goldenfeld’s event was informal, as a Halloween-spirited graveyard picnic.

Lolita is an alternative fashion that evolved in Japan, drawing inspiration from intricate Victorian clothing. Jumper skirts, blouses, ribbons and petticoats are common elements of lolita outfits. Goldenfeld explains lolita grew in popularity among its fans as a subversion of the mainstream fashion expectations of the time.

“In the late nineties, popular fashion involved showing more skin,” Goldenfeld said. “Lolita evolved as a fashion style inspired by European historical clothing from the eighteenth and nineteenth centuries that was modest, yet cute, and more accessible to wear in a modern context.”

Lolita has a handful of popular subgenres. Some, like classic lolita, emulate a demure tea party look. Others, like Goldenfeld’s preferred gothic lolita, embody the dark grandeur of 18th century Gothic aesthetics.

While October makes the graveyard visit especially seasonal, neither of Goldenfeld’s interests in gothic lolita or graveyards are limited to the season. Goldenfeld wears lolita year-round, in the same situations anybody else would wear a favorite outfit.

“I know it looks funky, but it’s clothes … Lolita isn’t a costume, it’s a fashion style,” Goldenfeld said. “I love Halloween, but I wouldn’t wear lolita to a costume party.”

Goldenfeld also visits graveyards in the summer, which is when she discovered the graveyard she picnicked at.

“If I find one I really like, I’ll sit in it and listen to music, take some pictures,” Goldenfeld said. “It’s a nice way to relax. ”

Ava des Mortes, a goth makeup artist from Georgia who has visited numerous cemeteries and recently went on a graveyard picnic with her boyfriend, said she has been previously criticized by other goth people for posing with headstones in a photo.

“The particular photo was taken at a gravesite that was no longer being used anymore, so I didn’t feel as though I was being disrespectful … I never walk on graves or deface them,” Mortes said.

For Mortes, the negative reaction from some people in her subculture caught her off guard.

“Goths and graveyards have gone hand in hand since the beginning of being goth, so I was very confused as to why I was getting such heated comments from other goths,” Mortes said. “They were the last people I had actually expected to receive this kind of backlash from.”

For Mortes, the architecture within graveyards deserves to be celebrated. One of her most frequented burial grounds is the Rose Hill Cemetery in Georgia.

“There are many obelisks, beautiful life-sized angels, crosses the size of SUVs and gorgeous lifelike tapestries carved from stone,” Mortes said. “Rose Hill has always seemed otherworldly to me. Dark and beautiful.”

Goldenfeld also finds merit in the local graveyards around the University.

“Graveyards are peaceful, quiet,” Goldenfeld said. “There’s a certain serenity about it. The older and more run down it is, the more nature is integrated into the graveyard, like moss on the gravestones, or trees growing in the middle of it, the more I’m attracted to it … I know sometimes living in this town can be a little boring and tedious. And there isn’t necessarily that much to do, but I think there’s a beauty to the landscape and the corn and the old barns. That sort of thing.”

Both Mortes and Goldenfeld belong to dark-themed alternative subcultures — goth and gothic lolita, respectively — though there’s a difference between the two genres that outsiders might not expect.

Goldenfeld explains gothic lolita, unlike goth, is foremost defined by its fashion and visual aesthetics.

Mortes, meanwhile, centralizes goth music within goth culture when explaining how she came to embody goth.

“It wasn’t just about looking the part, but understanding that goth was about the music movement from the 70s and 80s behind it as well,” she said.

Goldenfeld said some members of the lolita subculture are apprehensive about media attention due to previous mischaracterizations of the fashion’s origins and connotations.

“A lot of the times, the media tends to sensationalize the fashion … because of its name, though it was nothing to do with the book,” Goldenfeld said. “People tend to portray (lolita) as either something frivolous and vapid that women partake in or sexualize it in a way that is not accurate (because) the fashion is explicitly nonsexual.”

“People on the outside sexualize it because it’s a subculture comprised largely of women, and in the public eye people assume it’s for the benefit of men or to be sexy,” Goldenfeld said.

For both Mortes and Goldenfeld, the word “goth” is similarly misconstrued. Mortes said there are self-proclaimed goths who “don’t give a damn about the movement and just want to look ‘cute’ for social media.”

“Black lipstick does not make a goth,” Goldenfeld said.