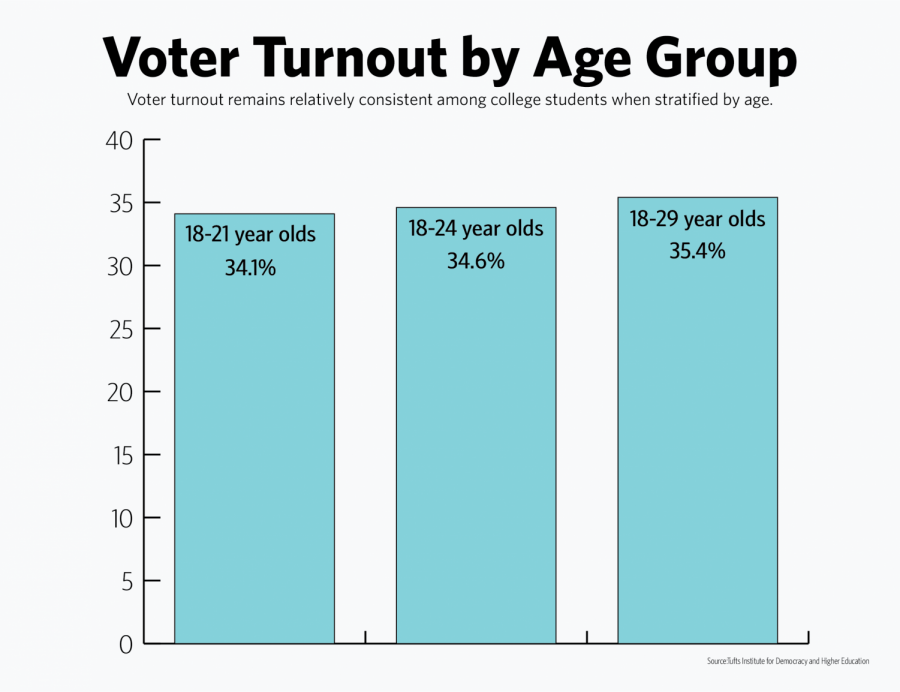 As the 2020 presidential campaigns gain speed, some college students may feel confused or hesitant about who to support in the coming primaries. Some students feel they aren’t informed enough to make a decision, and others are simply not interested in getting involved with the political world. Low levels of political participation and engagement are signs that not all citizens’ interests will be represented in candidates’ campaigns or during upcoming debates.

Politically and civically engaged citizens are often viewed as signs of a functioning democracy because their voices have a greater chance of being elevated and heard. It is a sign of the presence of healthy political and civic discourse.

Being politically engaged can take many forms – voting, contacting your representatives, volunteering in campaigns and canvassing are some go-to methods.

Jordan McCoy, senior in ACES, said, “To me, political engagement means that you’re actually putting action behind the things that you’re saying, … so that way you can bring about a change.”

McCoy says he chooses not to be politically engaged because “politics nowadays is all about proving that you’re right,” as opposed to “respecting another person’s ideas and viewpoints even though you don’t agree with them.”

“I choose not to engage with it because I don’t want to stress myself out or make myself mad over something that honestly, at the end of the day, probably isn’t going to affect me super heavily,” McCoy says.

Vikram Amar, professor in Law, thinks current college students are generally not as big “political junkies” as the students from 10-20 years ago. Amar attributes this to the “nastiness” of the current political climate.

According to AllSides Media Bias Ratings, a site that rates media organizations on a political spectrum, many of the popular news sources have a clearly defined bias, a factor that may contribute to the “unpleasantness” of the current political discussion.

Max Lyakhovetsky, a junior in Business, said he was more politically active in high school than he is now. At that time, he participated in and founded a political debate group to engage with different ideas from his peers.

“Now, I don’t really like engaging with people from the opposite side, because it’s pretty stressful to deal with,” Lyakhovetsky said.

He said a discussion turning into an argument is inevitable when talking to someone with different viewpoints.

Both McCoy and Lyakhovetsky cite the stresses of being a university student for their decrease in political engagement. McCoy is heavily involved in extracurricular activities, such as a fraternity and a dance group. Internship interviews, daily homework, exams and family obligations are just a few factors that can get in the way of a student’s level of political and civic engagement.

Despite not being as politically engaged as he once was, it is very important to Lyakhovetsky to stay informed and up-to-date on current events because he has a strong interest in politics.

However, Lyakhovetsky said it can be difficult to find reliable, unbiased news sources.

Professor Amar sees issues with news coverage from outlets all across the political spectrum.

“We live in a world where there’s so much more information bombarding us from so many different sources, and there are so many distractions,” he said. “It’s hard to stay focused.”

Nikolas Pfanner, president of the Illini Young Democratic Socialists of America and junior in LAS, believes political engagement goes beyond being aware of everything that’s going on. Pfanner said engaging with political theories and history is the first step, and citizens should not be politically active until “your knowledge can inform your actions and you can put your beliefs into practice.”

Pfanner believes political engagement among college students has been on the rise since the 2016 election. This is supported by a recent Tufts University Institute for Democracy & Higher Education study that reported how college voter turnout doubled from 2014 to 2018.

The Tufts study also reported the voter turnout for voters between ages 18-21, 18-24 and 18-29 all hovered around 35% in 2018. In 2014, the voter turnout percentages across these age ranges were around 14%. This means the general college-aged demographics all rose at the same rate and during the same time frame.

Although we know the youth voter turnout is rising, we cannot accurately predict to whom or to which political party those votes are going towards. After the 2016 presidential election, The Center for Information and Research on Civic Learning and Engagement found major political parties struggled with gaining youth voter support.

Although the voting rate is increasing among college-aged citizens, the nature of the upcoming election coverage can turn students away from being politically engaged.

“It understandably turns people off, but it’s not good for our future if it turns people off permanently,” Amar says. “There seem to be so few people who are interested in the truth as opposed to just spinning their particular side of things.”