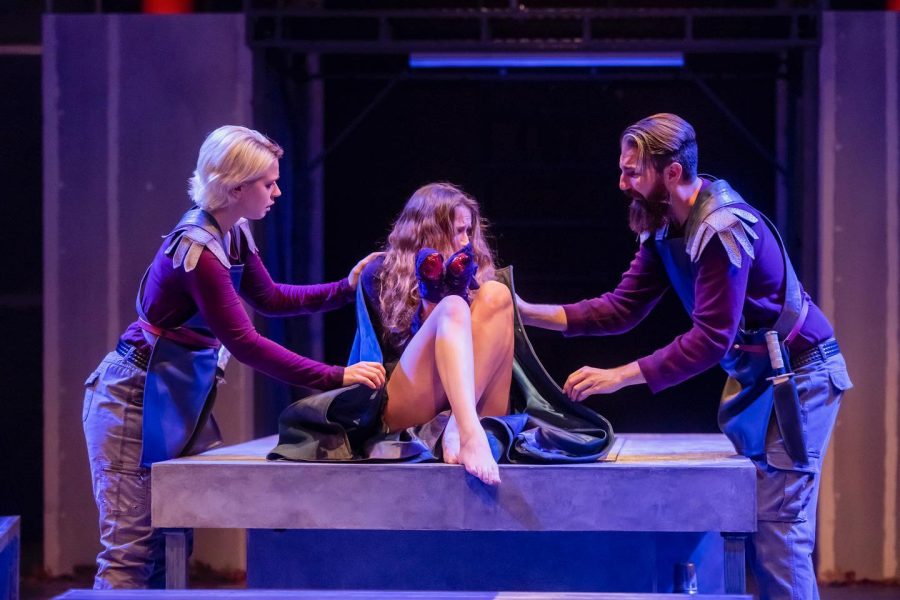 The cast of the Krannert Center for the Performing Arts’ production of “Titus Andronicus” performs in their opening night on Oct. 24. Illinois Theatre has taken strides to increase inclusivity in theater and other forms of multimedia performance by placing students like Andrew Morrill, graduate student in FAA who was deaf from birth, at the forefront of performances.

Across the country, more efforts are being made to reach all audiences of all abilities, including theaters adding American Sign Language and interpretation services to their performances. ASL interpreters are now part of the performing arts community on campus at the Krannert Center for the Performing Arts.

Bunita L. Berg works in the ticket office at KCPA and as a staff interpreter for the University.

“The University has a general policy of being accessible for everything,” Berg said. “They try to hire interpreters for all important big events at the University. They’ve been doing that for years as well.”

And in that same vein, there have been more efforts to diversify who is represented in media and in the performing arts community. At the University, the theater department casted a deaf actor to share the main role in a production, the Shakespearean play “Titus Andronicus.”

Andrew Morrill is a graduate student in FAA. Morrill, who has been deaf since birth and has a passion for acting, spoke about his experience as a deaf actor within the performing arts.

The following interview has been edited for clarity.

The Daily Illini: Can you talk to me a little bit about the MFA acting major and how you got in?

Andrew Morrill: I involved one high school production during my senior year and I fell love in with theatre arts. I was determined to continue this pursuit in theatre arts in the college. Due to many factors, I decided to major in History instead. Until I graduated with the degree of History and International Studies, I realized this is not what I want to make a career out of this. Therefore, I re-shifted my passion and enrolled in the MFA Acting program here at UIUC.

Then when I graduated, I realized, you know what? That’s not really my passion. I really wanted to get involved with acting again. So then I did one more play with the University, and I realized that was my true passion, and I decided to pursue that dream by studying the MFA acting major.

DI: How did the opportunity of incorporating signing into your acting come about through the KCPA?

Morrill: The Illinois Theatre department usually host six-seven productions per year. We, the MFAs and BFAs, are required to attend the audition in order to cast to a role. I auditioned and got the callback for several roles in TITUS ANDRONICUS. The titular character is one of them. Then, the director and we were so ambitious with the idea of double-casting for this role. That’s how Rachael and I ended up in this role

DI: Who were you collaborating with during the process of incorporating ASL into the production?

Morrill: The ASL translation is a separate process, therefore, it takes time and translate the texts. I was fortunate to work with Crom Saunders. He is currently a faculty member of Columbia College’s Deaf Studies department in Chicago. ASL and Shakespeare is his expert area. We collaborated together and translated all texts. He also taught other cast members to sign at these specific texts.

Rachael, also a cohort of MFA Acting program, and I worked closely to bring the character of Titus alive with Andreson’s, the director, leadership.

DI: What are some more unknown difficulties that you face specifically within this role of Titus?

Morrill: I would not perceive it as a difficulty. I see it as an exciting challenge. ASL is a different playground from English and Shakespearean English. Therefore, the translation is often challenging, yet enlightening. Technically, Shakespearean English is my third language, therefore, I will need to go through the process from Shakespearean English to English to ASL. Secondly, the ability to advocate Titus Andronicus as a character is a challenge. His journey includes the ups and downs. I need to find some eases in this emotional rollercoaster during the performance.

DI: You mentioned that you speak three languages, what is the third language?

DI: What do you hope for the future of deaf talent?

Morrill: I want to see a more authentic representation of Deaf people and the deafness in the entertainment industry — on-screen & on stage. It also doesn’t necessarily limits to the lens of deafness — we also could offer our experiences and stories to the world where we could learn from each other.