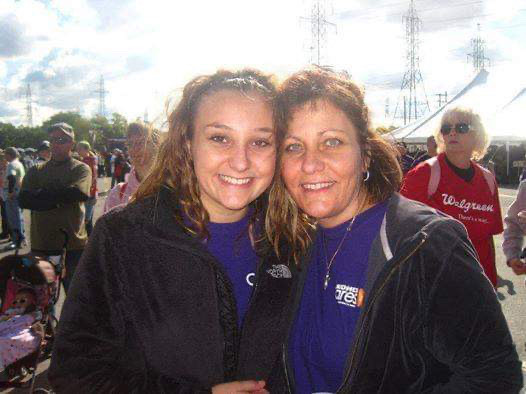 Pictured above is Connie Gyorr, and her daughter, Marisa MacDuff, who passed away from a cocaine-fentanyl overdose in 2016. Gyorr, created the foundation Marisa’s Purpose in her daughter’s honor to educate and raise awareness about the opioid epidemic.

When 20-year-old Marisa MacDuff was declared dead in 2016, her mother, Connie Gyorr, didn’t know why she passed away for 10 weeks. When she learned her daughter overdosed from a cocaine-fentanyl mix, she also discovered her daughter could have been saved by the Good Samaritan law.

“She was with another person in a vehicle,” Gyorr said. “When Marisa overdosed, he took her to the hospital, but he never took her in. I imagine it was because he was afraid that he would be blamed for her death, and, possibly, he was participating. But whatever the case is, he didn’t take her in, and he left her in a wooded area. He left her there, by herself, to die.”

Sgt. Jennifer Difanis of the Urbana Police Department says she administers Narcan the most to white males. Narcan is a medication meant to reverse an opioid overdose. She says these statistics can be explained because white people have better access to healthcare.

“They’re kids [who] are getting their wisdom teeth out,” Difanis said. “They’re kids whose parents access the medical system. How do people first get access to prescription medication? You have access to people who utilize their healthcare system. You start with the pill abuse, and then the heroin became so much cheaper and much more accessible. So people who now have a physical addiction are looking for an easier way to meet that need, and heroin became a lot faster of a transition locally than I think people realized.”

“And so now, because the face of the problem is a little bit different, right? It’s rural, it’s white,” Dhardwadker said. “There is a different kind of attention being paid to it. It’s being treated much more like a public health problem as opposed to a criminal activity problem. Even though the people sort of wrapped into this epidemic are abusing prescription drugs, and they are tapping into the black, heroin black market. It’s not like the activities are kind of different, it’s that it’s affecting a different population.”

Dharwadker is part of a new generation of architecture activists who want to use design to tackle different social issues. She says much of the literature regarding the opioid crisis right now focuses on individuals, both in the stories she sees on the news and how people are treated medically. She wonders, though, how much of the epidemic is perpetuated by the physical environment.

Bethany Little is the founder and executive director of Women in Need Recovery, a stable living environment for people who identify as women who have completed drug treatment or who were formerly incarcerated. Little says other similar housing accommodations emphasize finding employment, but she believes for these people to reenter society, they need a safe environment. They need a home.

Difanis said Urbana police get anywhere from three to four calls a night to respond to overdoses just in Urbana. She said in Champaign County, there might be 12 overdose calls a night, and those are just the people who call. She said she thinks people would be surprised to hear these estimates.

There are efforts being made to address the epidemic in the community.

Gyorr is working to educate and bring awareness about the opioid epidemic with her foundation, Marisa’s Purpose, made in her daughter’s honor. When making the foundation, Gyorr recalled a conversation they had together. Marisa told her mom she wanted to do something big and impactful, where she could help a lot of people.