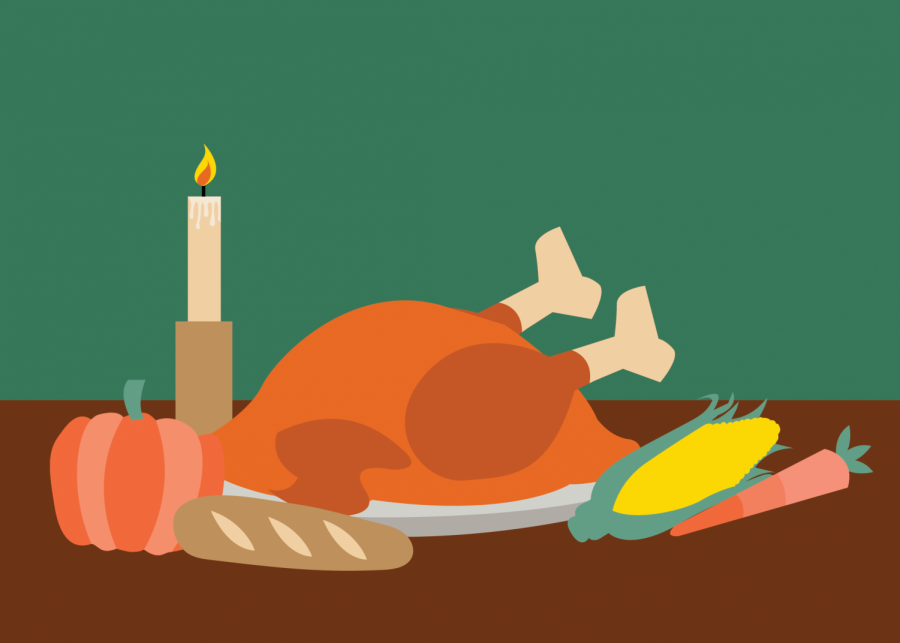 Hold the cranberries, and pass the gravy! Students and community organizers are preparing for the Thanksgiving holiday by sharing unique traditions and alternative ways to celebrate the holiday.

Nakita Pradhan, senior in LAS, is excited for her upcoming Thanksgiving feast with her family. But their celebration will come, as always, on Friday, the day after Thanksgiving.

Pradhan’s parents are immigrants from India and practice Hinduism, so they take that Thursday, “to pray and pay respects by being vegetarian.” However, they still partake in other common Thanksgiving day traditions, such as watching football and the Macy’s Thanksgiving Day Parade.

Pradhan says her family no longer remains vegetarian on Thursdays throughout the year, “but we still keep that tradition every year on Thanksgiving.”

Pradhan’s family has their Thanksgiving meal the day after, “which is actually great because everything’s half off at Boston Market on Friday.”

Thanksgiving traditions seem to range for students across campus. For people like Alyssa Pappas, senior in LAS and a member of the all-female acapella group the Illinois Rip Chords, Thanksgiving is celebrated on and off-campus. The members of the Rip Chords hold an annual Friendsgiving, called “Ripsgiving.”

Pappas explains that the members of the acapella group convene at one person’s apartment with a beloved Thanksgiving dish in hand. The girls share their dishes, “turn on some good tunes and hang out.”

The Rip Chords’ Thanksgiving tradition is so important to Pappas because it allows the members to connect, share a meal and bond with each other.

“It’s such a good way of getting to know one another better while getting in the holiday spirit,” Pappas said.

Friendsgivings aren’t just exclusive to RSOs; many organizations in the community are hosting their own dinners for the public to attend. Wesley United Methodist Church will be hosting its own community Friendsgiving potluck, “with students, international students, visiting scholars and people from the community,” on Friday.

For students who are on campus this Thanksgiving, there are bountiful opportunities to get into the spirit of the holiday. This year, the Salvation Army will hold it’s third annual community Thanksgiving dinner “for anyone in need of food and fellowship.”

The dinner is a joint effort between the Salvation Army, Lone Star Lodge #18 and Urbana Masonic Lodge #157. The Salvation Army supplies the event space while the Lone Star, and Urbana lodges take on the task of locating volunteers, setting up and carrying out the event. Lone Star Lodge #18 is a predominantly African American masonry group and has been active in Champaign for over 100 years.

Curtis Blanden is a member of Lone Star Lodge #18 and the founder of the annual event. He and his wife do the majority of the cooking for the event. It will be held at the Salvation Army Thrift Store on Thanksgiving day.

Blanden says the idea to start a yearly community dinner came from wanting “to have a place on the holiday where people from all walks of life could come, eat, talk and experience a sense of community.”

Blanden says anyone from newborn-aged to the elderly attends the dinner. He has seen students from the University and Parkland students at the event, as well as people without homes.

Since the first community dinner two years ago, attendance numbers have increased. The first year, around 50 people came. In the second year, about 150 people came. This year, Blanden is hoping “to pack the house” and get at least 300 attendees.

There are plenty of other community dinners going on in Champaign-Urbana this year. Urbana High School will host its 49th Annual Thanksgiving Dinner on the holiday from 5-7 p.m. The event is sponsored by the UHS Senate and served entirely by the students.

Community dinners have been happening leading up to the holiday as well. Just this past weekend, the Foster Care Alumni of America annual Thanksgiving was hosted at the School of Social Work, and the Indian Christian Fellowship community Thanksgiving dinner was held at the Asian American Cultural House.

Blanden is moved by how the holiday and these dinners can bring people together. When asked what his favorite part of the dinner is, he said, “first and foremost, the sense of community and providing a service to others. But besides that, the stuffing.”