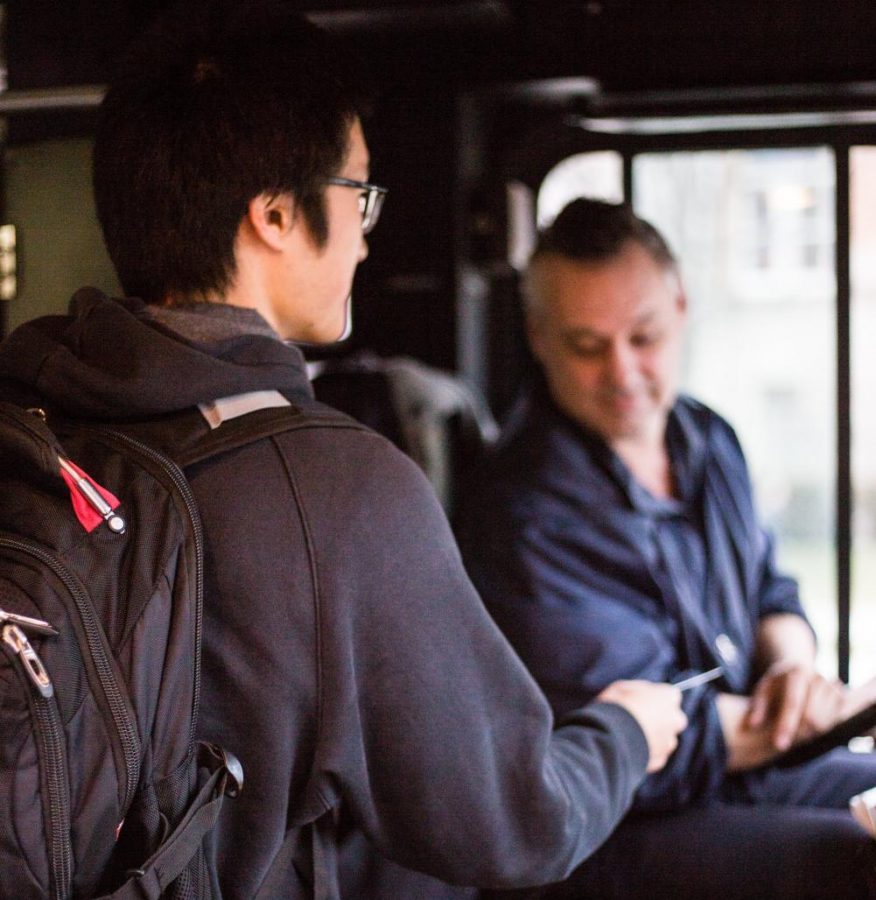 Noah Lee, junior in AHS, presents his ID to an MTD bus driver on Feb. 23, 2018. Longtime MTD driver Earnestine “Sunshine” Crook has been driving buses on campus for over 10 years, and she is known both for driving the 12 Teal buses and for her bright smile and cheerful attitude when interacting with new passengers.

Longtime MTD driver Earnestine “Sunshine” Crook has been driving for over 10 years, and throughout her time in Champaign-Urbana, she has built a reputation. While some students know her as the driver of the 12 Teal buses, most know her for her bright smile and cheerful attitude.

The Daily Illini: How did you get the name “Sunshine”?

Earnestine Crook: My actual name is Earnestine Crook. People go back and forth between Earnestine and Sunshine, but a majority of people call me Sunshine. I started here in 2007, and I went full time in 2008. A gentleman got on my bus, and I greet people. I was like, “Hello, young man. How is it going?” He was having a bad day so he sat down by me and told me what was wrong. I gave him some encouraging words, and he said “You’re my Sunshine,” and it just stuck ever since.

One day at my job, someone asked me what was my most memorable time that I had here, because they were doing portraits and putting it on the side of the buses, and I said the most memorable thing that I remember was that man calling me Sunshine. Eventually passengers started calling me Sunshine because when they saw my portrait on the side of the bus with the little short about myself that had the story that I told them about, and they went “Hmm, Sunshine actually suits you.” And that was it!

DI: I noticed you had a really personal relationship with some of the passengers, so how long have you known some of these people?

Crook: Twelve years is a mighty long time. When you get around and you see the same passengers again and again and again you just start to get to know them. You’re going to see them every day, so why not chitchat and have a conversation with them? We don’t go out together or anything, but we have a bond on the bus. I know a lot of different people like that, some people call me Mama Sunshine, some people call me Titi Sunshine, others FaceTime me, some have me on Facebook. So I have met a lot of people from all of the world with all of the nationalities.

DI: Do people recognize you when you’re out and about?

Crook: Yes, yes! We did a commercial a while ago, and I was in that. This lady came up to me while I was at Walmart, and she said “Are you the lady on the commercial for MTD?” I was like “Yes!” And she came up and hugged me, and I didn’t even know her!

DI: Why is it you’re so full of joy and “Sunshine”?

Crook: The first reason is because of God and my love for him. My parents raised me to love people, to respect people and to do unto others as I would have them do unto me. That’s always stuck with me. Someone could be having a bad day and if you could just say a good “hello” or “good morning”, you don’t know the positive effect you can have on somebody, and all you really do is smile.

Today, one student got on my bus and he was like, “I’m glad to see you today Sunshine,” and I said “I’m glad to see you, too.” He said “Today’s my birthday,” and I just went “Bus! Today’s his birthday!” And the whole bus just started singing the birthday song for him.

DI: What do you think is the greatest part of your day?

Just making sure I’m safe, that my surroundings are safe and the students are safe. Customer service is my priority along with safety, so getting the person where they’re supposed to go, making sure the elderly have a seat, taking care of my bus — it’s all important.  I’ve driven the 22 Illini and the 12 Teal, so I’ve driven everything there is to drive and seen everything there is to see. I’ve seen my share of drunk kids on a Friday or Saturday night. We used to have trashbags on the bus for the students if they were going to throw up, too.

DI: You have any particularly memorable stories you really adore?

Crook: Yeah, I do! Long time ago, there was this one lady who was pregnant, so I would always kneel the kneeler down whenever she got on. I didn’t care where we were or how many people had to get where, how fast. I always made sure I kneeled the kneeler for her. Eventually she stopped coming, and I didn’t see her for a long time. When she did some back, she had had the baby, but I didn’t know that. So she gets on the bus and she goes “Sunshine, you remember when I was pregnant?” and I said, “Is that you, girl?” and she said “Yeah! And guess what, here’s the baby!” and the whole bus was laughing and clapping.