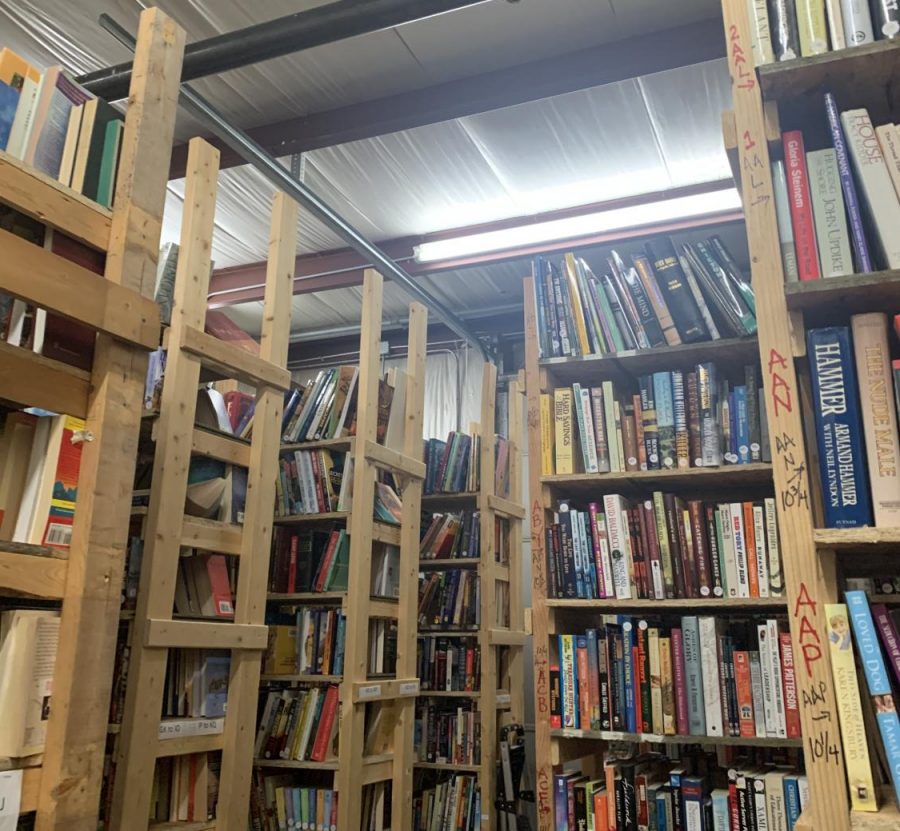 The cheerful doorbell rings again. Another visitor. A second after, the bookstore returns to silence, with only the rustling of pages flipping in the background. No music. Other than brochures and business cards on the counter, a white, marble Jesus Christ statuette catches attention. Away from the austere, wooden bookshelves in the main area, there are two separate rooms with hundreds of children’s books and religious books.

In the backroom, Beth Wendling is surrounded by rows of giant bookshelves loaded with more than 11,000 donated books. While chatting with co-workers, Wendling adeptly wraps the books in different packages to ship to out-of-state customers.

Beth Wendling is the founder of Orphans Treasure Box, a nonprofit organization that sells these donated books both online and at the Champaign retail store. The earnings are given to help orphans and vulnerable children locally and globally.

There are roughly 140 million orphans across the world, and every day, an estimated 5,700 more children become orphans, according to statistics from the United Nations Children’s Emergency Fund.

About eight and a half years ago, Wendling felt obligated to contribute after reading the book “Radical.”

“The book asks the questions like, ‘If you really believe there is a God and that He created you with purpose, then what are you doing with your life?’ My life is pretty much about me, and I am really not doing much of anything to make a difference. I felt it had to change,” Wendling said.

Feeling like God tapped her on the shoulder, Wendling founded Orphans Treasure Box in 2011. For the past eight years, the store has given away close to $60,000 to help local parents and kids, in addition to international orphanages in Thailand, Peru, South Africa, Haiti and Cambodia.

Different from other nonprofit organizations, Orphans Treasure Box does not have a fundraising wing. Wendling said she does not want to ask people to give money but rather to earn it from selling the books.

For years, Orphans Treasure Box has been working with a local business called Frances Nelson Clinic, a medical health center providing affordable health care services to people who don’t have insurance. Orphans Treasure Box donated 2,500 children’s books per year for kids in the clinic to take for free.

Kathi Rowell is a volunteer at Frances Nelson. As a retired literature teacher with 35 years of experience and a grandmother of a four-year-old, Rowell knows how to select books. Every week, she picks 75 intriguing books from the store that have various difficulty levels.

“In the clinic, if we see kids waiting in the lobby, we will go over to them and encourage them to come over to the bookshelf to choose the book and let them know that they can take them home for free,” she said. “If it wasn’t Orphans Treasure Box, we would not be able to keep our bookshelves stocked.”

Rowell hopes the books help foster kids’ excitement and curiosity about books. She also thinks it is an opportunity for the parents to spend more time reading with their children. Both Rowell and Wendling believe parents play crucial roles in children’s development.

“What I have found is that if you really want to change a child’s life, help change the parent’s life,” Wendling said. “Give the parent a chance, and the parent can provide for that child.”

In 2016, Orphans Treasure Box launched Restart, a program that offers part-time job opportunities to people who have complex backgrounds, such as drug convictions and incarceration, and are in need of a second chance — especially those who are homeless or in danger of becoming homeless and single mothers in the C-U community.

Roughly 20% of Champaign County residents live in poverty, according to the most recent demographic data from the Census Bureau released in 2018.

In pursuit of helping children and parents in the community, Wendling came up with Restart to employ people who have struggled in the past. Of the 16 employees she accepted, over half used Restart as a launching pad to get another job elsewhere.

Elisabeth Paulus was the former director of Restart. Starting as a volunteer, Paulus helped manage the retail store because of her understanding of books and eventually got on the payroll as an employee. She said the program, which partners with different organizations and groups in town, is most successful when people are close to being independent.

“We partner with that group and they (introduce people) who have gone through our program and just need someone to take a chance on them,” Paulus said.

Paulus said it’s common for people who have had drug convictions or have never held down a job before to be unfamiliar with a standard working environment. Restart does not simply give a job but also teaches people how to get back on their feet in a more compassionate and understanding way. For example, they take into account single moms will need to pick up their kids.

“Normal employers don’t want to take time to teach someone,” Paulus said. “They expect you to come, do the job and leave. If you can’t do the job, they’ll just fire you … it is not something that’s innate that you just know (how to work). It’s something that you learn.”

After turning in the applications, the candidates have to pass an interview to get this job like a regular employee. Paulus said when she interviews employees at Orphans Treasure Box, she seeks individuals with a drive to better themselves.

“You can pretty much teach anyone anything, but when people have been beaten down so much, they’ve just given up being like, ‘I am doing this because somebody asked me to. I don’t really care.’ You can’t teach someone to care,” she said.

To Paulus, Wendling and Rowell, it is exciting to invest time into someone’s life and watch their growth and become independent.

Toya Douglas was a homeless single mother living in Restoration Urban Ministries. With the help of Restart, she has been able to give herself and her nine kids a house; she now works at Illini Tower as a meal cook.

Being a cook has always been Douglas’s dream job, but she had never thought about it before. She attributes her life changing after Restart opened the door.

“Restart taught me to build self-confidence and self-esteem about myself,” Douglas said. “It taught me how to get back out there in the work industry … now even on my days off, it is hard to just sit in the house. So I scheduled all my appointments, so I could be out doing something.”

Douglas bought many books from Orphans Treasure Box as a customer during the years she participated Restart. She often read but has found it hard to keep up with as of late.

“I love my new life now, but I still go through some rollercoaster events,” she said. “I am still a single parent. It’s still kind of hard, but I went from $9 per hour to $10 and now to $13. My next goal is to take the test of U of I and sign with the campus so I could make (a) bigger income as a cook.”

“I wish the program was something that more businesses would do … it takes a lot of time and energy, and you are basically hiring people that you know will be leaving soon,” Paulus said. “I can see it would be really hard (for a lot of businesses) to maintain that, but it’s so amazing to change someone’s life.”