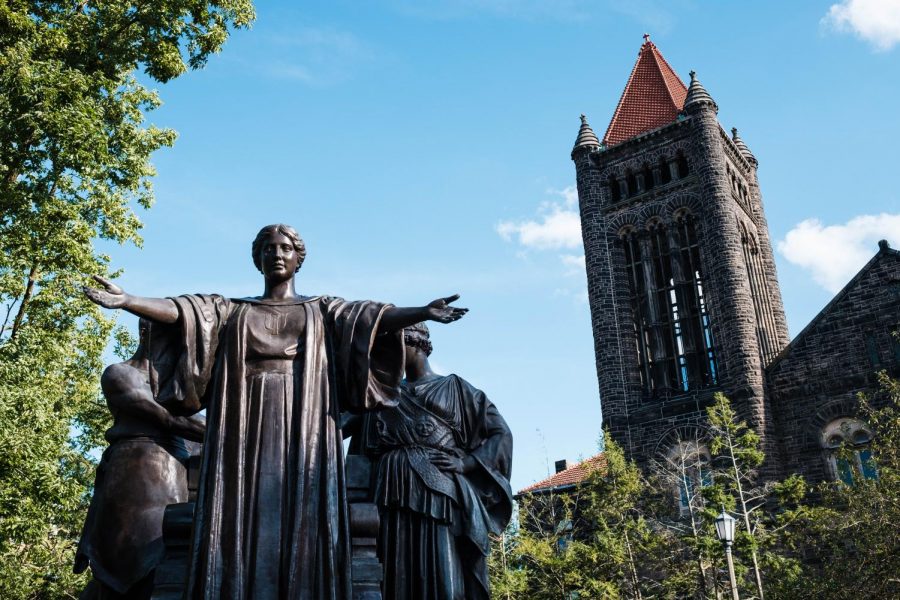 Alma Mater stands on the corner of Wright and Green streets. The University ranks first for international students as a public school and fifth on the national level.

Universities in the United States made an all-time high record of 1,095,299 international students enrolled for the 2018-2019 school year.

“Despite national downtrends, international enrollment has been fairly stable for us over the last five years,” Borst said. “We’ve improved in the diversity of countries represented, and we are working to fortify our international recruitment pipelines.”

Julie Misa, associate provost for Illinois International, said in an email she believes this is due to the University’s top-ranked programs, groundbreaking research and thriving campus community.

“Illinois alumni are exceptional, and student success is high, with 91% of 2017-18 graduates reporting that they were employed or continuing their education within six months of graduation,” Misa said. “All of these factors combine to make Illinois stand out as a destination for international students.”

The International Student and Scholar Services offer a variety of assistance for international students through advising, immigration services, programming, advocacy and outreach, according to the ISSS website.

Martin McFarlane, director of ISSS, said in an email he thinks it would be ignorant to suggest the programs ISSS offers influence a students decision to come here. Instead, Illinois’ academic reputation is the main factor.

In the future, the admissions office’s goal is to maintain the size of the undergraduate enrollment while continuing to increase the academic profile and diversity of the incoming class, according to Borst.

“While the University has worked hard to establish and fortify relationships with China as our largest feeder country, our primary goal is to diversify the countries represented in our overall student population,” Borst said.