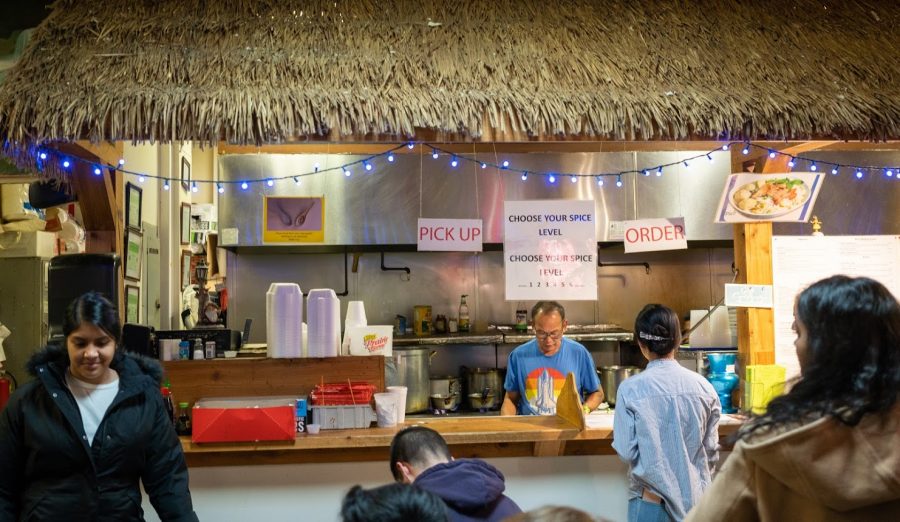 The Bangkok Thai cashier, a worker regular customers often see betting on football teams, is popular for being a source of happiness within the restaurant.

Bangkok Thai has been on campus for several years now, and it is a favorite for many students. Heat or spice levels are customizable on every dish on a scale of one to six, with six reserved for only the bravest among the masses. Their green curry is easily one of the most popular dishes, full of lively and distinguishable flavor. Food aside, though, one of the most notable things about Bangkok Thai is the extremely friendly, old cashier who also runs the place.

Nitish Natarajan, a frequent patron at Bangkok Thai, goes there around three or four times a week. Natarajan said his visits to Bangkok Thai are so often he feels like he knows the old man who frequently runs the register almost personally.

“One day, I went to Bangkok Thai, and he was, as usual, watching football,” he said. “There were sachets of tea and hot water. This was some time during my initial visits, so I really didn’t know the ins and outs of the place like I do now.  So, I asked him if could have some of the tea. He was so overjoyed, or hyped or somewhere in between that he went, ‘Yeah, it’s free,’ in the most shrill, happy tone I’d ever heard. It was hilarious. He told me that they usually keep hot water because of how cold it got outside in (C-U).”

Shravan Ravi, sophomore in Business, said he has seen the old cashier betting on football teams, one of his many passions.

“He loves the Green Bay Packers,” Ravi said. “I’ve seen his entire family just standing there watching a football match on the television because he’s bet on the match. It’s quite nice to see how invested all of them are in his football matches.”

Ravi admitted he enjoyed watching him bet on games.

“One time, my friend and I went and actually watched him bet on the match,” Ravi said. “He went, ‘Well, this is five pad thais that I’m betting.’ And the both of us, who didn’t really know what was going on at the time, were pretty confused so we just asked what he was talking about. And he actually went through the pain of explaining how he just bet fifty dollars, which was also five pad thais because each pad thai was about 10 dollars. I just love the guy, honestly. I haven’t seen him lately too much, but whenever he’s there he makes it so much better.”

Ravi said he did not spend too long there but while he was there, the team the cashier had bet on, the Green Bay Packers, was losing.  After they got their food and left for home a couple of hours later, they checked the outcome of the match, and the Packers had won.

With another branch open in Urbana, Prannav Gupta, sophomore in Engineering, thinks Bangkok Thai is just going to keep expanding.

“They’re really successful at this point; they’re so successful that they make enough money to use their own schedule,” Gupta said. “They don’t bend their timings for customers. Customers are always coming. They have a huge rush whenever they’re open. We’re the ones who have to keep checking if it’s open or not; it’s quite remarkable.”

“One of the great things about Bangkok Thai is the quantity of food they give us,” Kalaria said. “I don’t think I’ve ever finished one helping of food in one sitting because they just give you so much food. This one time, I went to Bangkok Thai and there was this guy in the corner who was eating three whole dishes. He didn’t pack for take-out; he just sat there and finished the entire meal. It was something of a miracle, honestly.”

Bangkok Thai continues to expand to 1104 N. Cunningham Ave. in Urbana, but the one on campus will always be remembered fondly for its food, experiences and the old cashier.

“Honestly I’ve got so many experiences with Bangkok Thai,” Natarajan said. “It was my friend’s birthday once, and we emptied an entire helping of green curry on him as a joke. This other time, we loosened the salt-and-pepper shaker and watched another one of my friends empty the whole container of salt into his food. I honestly just love the place.”