Illinettes dance into basketball season, around the world 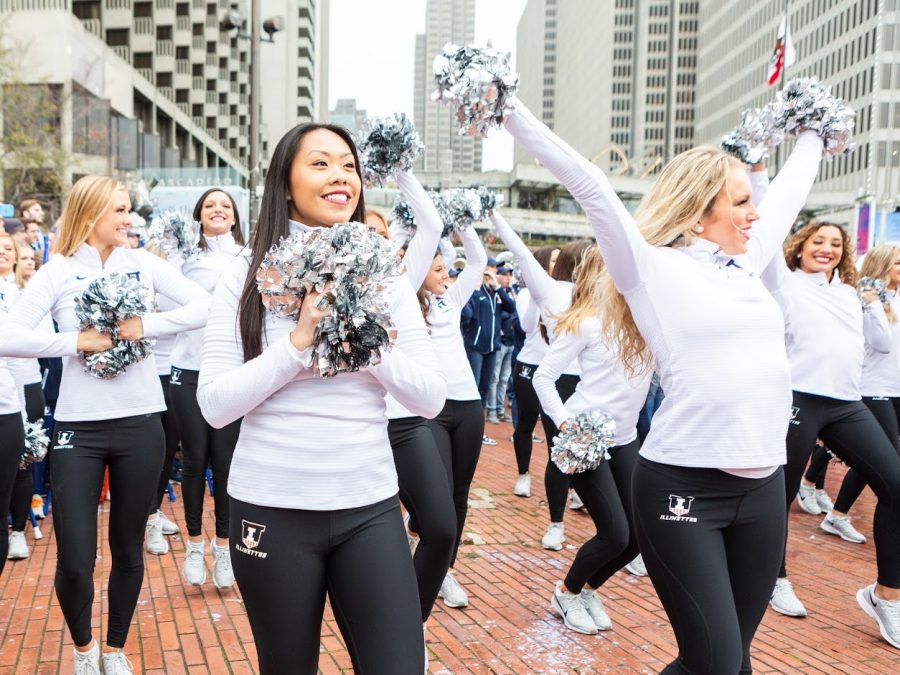 The Illinettes walk through Laney College in Oakland, California, preceding the Redbox Bowl on Dec. 29. To earn a spot on the team, the dancers go through an intense audition process, which involves a prepared solo and a learned routine taught by the captains.

At every home football and basketball game, spectators can see the Illinettes, the University’s official dance team. Made up of students who have been dancing their whole lives, the Illinettes are responsible for helping to entertain crowds during games.

The Illinettes are part of the Marching Illini. They perform a pregame show, sideline dances, feature dances and the halftime show throughout the football season. Ellie Pfister, senior in Education and co-captain of the Illinettes, expresses the school pride the dancers feel to be so heavily involved on game day.

“It’s just such an incredible feeling that we can give that back and use our talent to support the athletic program here,” Pfister said. “Every game day is a lot of work, but it’s very rewarding, and we look forward to every single game day.”

To prepare, the team practices every weekday with the band, with additional rehearsals separate from the band during football season. Adding the Marching Illini to their performance can change the experience, some dancers say.

“I’ve never marched with my high school dance team,” said Katherine Ciannella, sophomore in AHS. “I was always just strictly dancing. That’s a really cool opportunity, that we get to dance with the marching band and dance with their music.”

The Illinettes can also be found dancing during basketball games. However, with only 14 spots available on the court, half the team has to be cut for each performance. Pfister explains earning one of the spots in a performance is competitive.

“Our team works in such a unique way where we have to audition for most of our performance opportunities within the team,” Pfister said. “So even if you make the team, that doesn’t mean that you are set to go. You have to continue to work hard to earn opportunities because we have to be held to such a high standard.”

Many of the dances are choreographed by the Illinettes themselves. Each member has the opportunity to create and send in a dance for a chance to have it performed by the rest of the team.

“It’s led me to be a leader because we don’t really have a coach. We just have captains,” Cinnella said. “The rest of us are just choreographing.”

To join, dancers must go through an intense audition, explains Gianna Mazeska, senior in Media and co-captain of the Illinettes.

“You come with a (minute-long) dance prepared, and that’s after you audition your solo, and then there’s a cut,” Mazeska said. “From there, if you made it, you have to learn a minute and a half routine that the captains will teach, and that’s basically 30 seconds of jazz, 30 seconds of pom and 30 seconds of hip hop … and you find out that day if you made the team or not.”

Anywhere from 60 to 70 dancers typically audition each year, including current members, who are not guaranteed one of the 28 spots for the next year. Pfister shares why she was initially inspired to audition.

“College dance team has always been a goal for me as well as other people on the team,” Pfister said. “Living in the home state, I always felt like I held an extra sense of pride supporting the state and the University … the program has always been very respected, and they have had amazing opportunities.”

These opportunities included trips to Dublin, Ireland, with the Marching Illini for the St. Patrick’s Day Parade in 2018 and to California for the Redbox Bowl over winter break. Mazeska said these trips have been some of her best memories with the team.

“Ireland was one of the coolest experiences I’ve ever done,” Mazeska said. “As a team, we all got so close that week, and I’ll never forget it.”

While being on the team requires a lot of dedication, it is still one of the most rewarding experiences, Pfister said.

“We sacrifice a lot to be on the team with balancing academics and other extracurricular activities, even outside the team,” Pfister said. “I cannot imagine going through college any other way.”