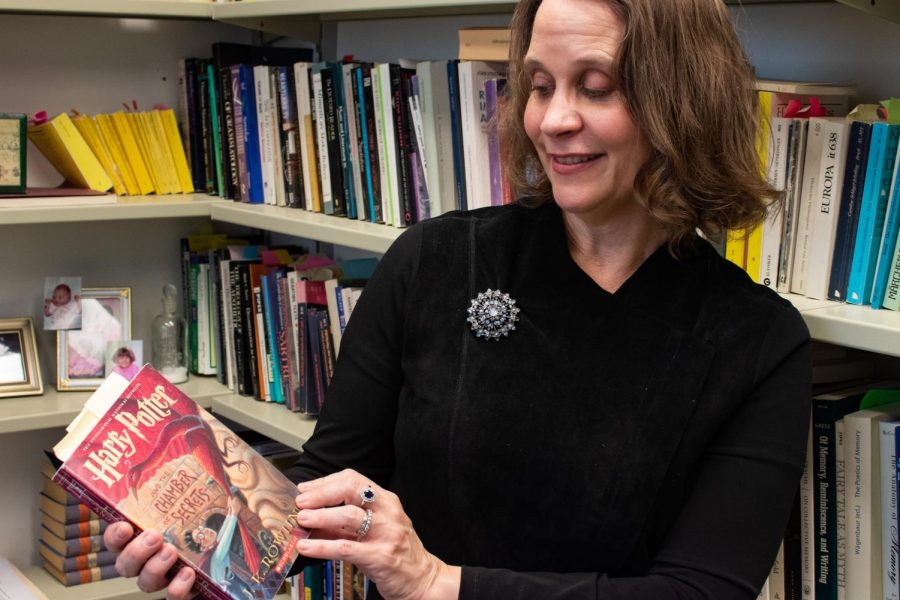 Laurie Johnson, professor in LAS, poses with “Harry Potter and the Chamber of Secrets” Tuesday. She is currently teaching GER 199/CWL 199: Harry Potter and Western Culture.

As time goes on, generations watch as beloved childhood books and movies evolve, and their meanings are interpreted differently. They hold a diverse amount of knowledge and learning material about that era. Here at the University, faculty have developed courses around pop culture.

GER 199/ CWN 199: Harry Potter and Western Culture is a course taught by Laurie Johnson, professor in LAS. The idea for the course came from Johnson’s love for the books, something she associates with her family since she and her husband have read the books to their daughters. Johnson said while students are familiar with the material, she hopes students can find different meanings and understandings in the books and pop culture at large.

“It’s not so much about integrating new stuff; it’s more finding what’s meaningful in whatever is popular now,” Johnson said.

While they dip into clips of the movies, illustrations and media tourism, the course is taught solely based on the seven books of the Harry Potter series.

Professor Johnson runs a discussion-based course. At the beginning of the semester, the students write down the main themes they see throughout the books. Mortality, love, freedom and power are among the most popular, Johnson said. As the semester progresses, the students add to this list as a running Harry Potter journal.

Johnson credits her diverse students for keeping her class unique and lively. International students in her class said they learn a lot about Western culture just through the books.

It’s been 23 years since the first Harry Potter book was released, and it is still as popular as when it initially came out. This is a concept Johnson proposes to each new class at the beginning of the semester.

“It’s something we’ve talked about already this semester, but why is Harry Potter still popular, but other young adult books that they read are no longer so known?” Johnson asked.

Kayla Lambert remembers her fifth-grade teacher lent her a copy of the first Harry Potter book. This prompted her to watch the movies and become a fan of the franchise at large.

Lambert, sophomore in LAS, was initially looking for a Harry Potter club at the University to join when she stumbled upon the Harry Potter course. She signed up immediately and inadvertently found a small community in the class.

“Having the ability to take a class like this, it’s sort of relaxing, and you meet so many people you may have never known have the same interests with you,” Lambert said.

Lambert sees many of the main themes in the series play out in her own life as well. When she started reading the series, she was the only one in her school who knew about the book. However, she never felt odd about it.

“It makes you feel connected to people no matter who they are, what they look like (or) where they come from,” Lambert said.

Lambert said there is a difference between consuming elements of pop culture and actually understanding its effects on the rest of society. That’s why she stresses classes like these are so important.

“When we read these books originally, it’s more for just enjoyment, but you don’t really think about different strategies the writers using or how it relates to real life,” Lambert said.

For Lambert, the importance of family and friendship is the theme she connects with the most in the books.

“(It’s about) choosing a good group of friends who you can depend on and who basically experience most of your childhood and young adulthood with you,” Lambert said.

Gen Z grew up in an age of mass content creation and distribution; great books and texts came out of this era because of all the platforms to publish on (e.g., Rupi Kaur and the success she found publishing her poems on Instagram). However, other classes at the University also use elements of pop culture to get students’ attention, even if the element isn’t the focus of the class.

“It helps keep people’s attention, and it helps people like him,” Klovsky said.

While Stepanov doesn’t use memes in all of his classes, they allow students to have a fun laugh but also connect the material with their own world.

For Johnson, she believes Harry Potter specifically has resonated with readers for decades because we can all connect with the main core struggles of each character within each chapter: mortality, fear and trust.

“That’s all stuff that everyone not only has to navigate growing up, but you have to always re-navigate,” she said.