High school at 16, college at 18: How one UI student aced the system 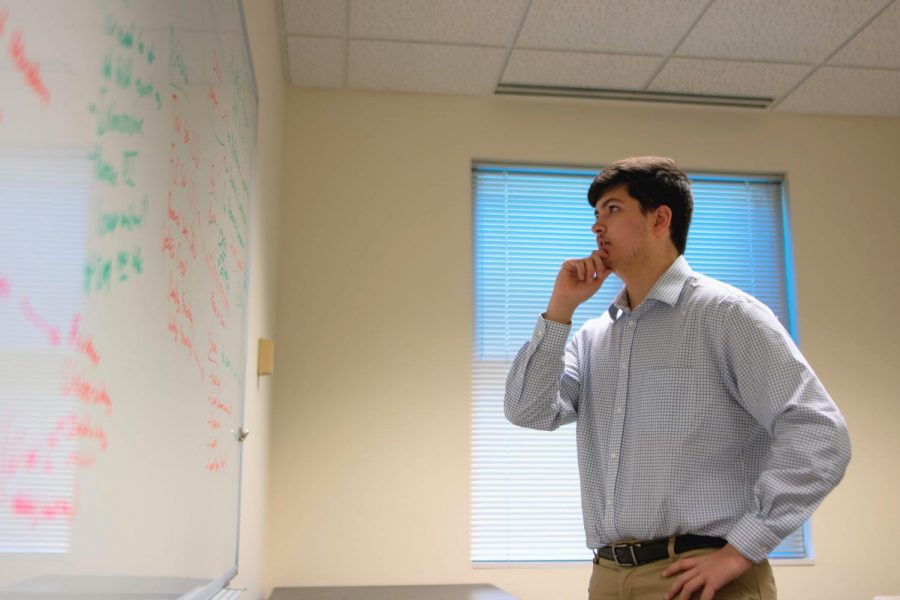 Vivek Nair, senior in Engineering, explains the details of a cybersecurity project he’s working on. Nair, currently 18, will graduate from the University this spring, only four semesters after first enrolling.

When Vivek Nair, senior in Engineering, was seven years old, he would tinker around on his father’s Windows XP laptop. He was fascinated by the machine and taught himself how to use it. Through trial and error, Nair figured out how to write code using batch programming. He remembers building random number generators or creating password protected files for fun.

It was at that very young age, Nair said, he decided to pursue computer programming. It was the beginning of a journey that would later include designing and selling a tablet, working at a startup, filing two patents, graduating high school and college all before turning 19.

The Daily Illini: How would you describe being the youngest person everywhere you went?

Nair: I’m used to being the youngest in a lot of situations. I skipped fourth grade and I started kindergarten a year early, so I was younger than everyone throughout school by at least one or two years. And then the biggest age difference was working at Holmusk, a healthcare startup in Singapore, when I was 13 years old. I was working in a company with medical staff, doctors and Ph.D.’s in computer science. It’s a sort of bizarre situation where there’s a 13-year-old kid leading a team with Ph.D.’s, people who you call doctor. I had to learn to value myself and not to underestimate myself because I’ve earned my position the same way everyone else did.

DI: What were some things that helped you graduate early? Did you have a lot of credits coming in?

Nair: I transferred a few AP courses, which most people do, but  AP Computer Science doesn’t even count towards the CS curriculum here. You sort of have to start from scratch. I was able to take the proficiency exams for those basic courses because I had the background, so my background was useful in letting me go a bit faster that first semester.

DI: That still doesn’t explain how you’ve covered all your coursework within two years. Did you stay for the summer semesters?

Nair: Some of my semesters I did pretty much normal 17-18 hours, but some semesters, I took 27 credits because they were such basic classes, at least to me. I’ve never gotten less than an A. I also took courses at Parkland at the same time as taking them here.

DI: How did you manage that?

Nair: There’s a schedule students in CS jokingly call the ‘suicide schedule.’ That’s if you take CS 241: System Programming, the systems class, CS 421: System Programming,  programming languages, and CS 233, the architecture class, at the same time. Well, that semester I took those three, two other computer science classes, three Gen Eds at Parkland, and then plus, that semester I had also earned four credits from research. So if you include that, it was about two semesters worth of credits I was able to earn in one semester just by doing things efficiently.

DI: What University resources have helped you the most?

Nair: I think the resources you want to use are mostly the advising resources. But the critical thing is you want to use the advising resources basically to tell you how to meet the requirements, right? For example, there is a course requirement in computer science called ethics. And all the students here also have to take an advanced composition course. And so if you talk to your advisors, you’ll find out that there’s a course called Engineering Ethics that meets both requirements. Instead of taking separate advanced composition and ethics, you just take one course and meet both. So if you talk to your department advising, you’ll find these kinds of opportunities that they don’t advertise on the website.

DI: Do you have any tips when it comes to performing well in classes?

Nair: In terms of just doing well in the classes, I think the only resource is yourself. You have to be able to teach yourself how to learn. It’s very different from person to person. That’s one of the things where the only advice I can give is if you’ve never taught yourself something, find a subject that you’re a little bit interested in and teach yourself that subject.

DI: What advice would you like to give people who wish to graduate early?

Nair: The main thing is to know exactly what you want very early. I would say if you have this idea that I’m going to explore a bunch of different areas and see which one is good, that’s fine, but that’s not for you to do in college. It’s not a wise use of time and money to do that exploring thing in college; that’s what high school is for. When you’re applying for colleges, be set in what you’re doing because you’re going to have to apply into a major. Decide pretty early and you can even do what I did, which is figuring out what subfield you’re interested in, like cybersecurity for me. The other thing is you should plan it out ahead of time. That might not need to be said, but I think it’s worth saying that you should really have a four-year plan or a three- or two-year plan. And I think what I did in taking Gen Eds at Parkland is very valuable. Community colleges are an extremely underrated thing in this country.

DI: What plans do you have after you graduate?

Nair:  I think I’ll end up working for the government or one of these federally-funded research development centers. But probably working for the Department of Defense or something like that and using my security expertise to help work on national security type problems.