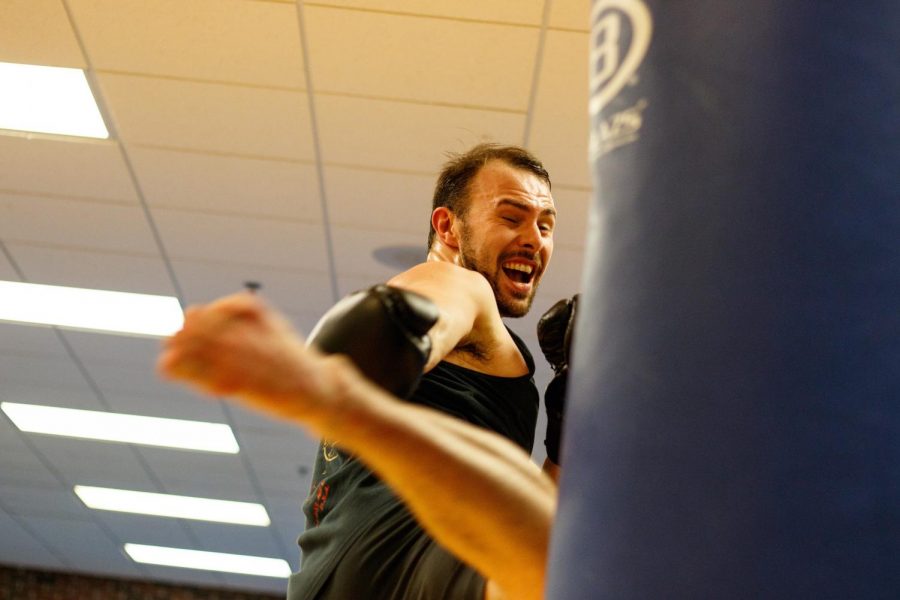 Adam Taggart, second year doctoral student in kinesiology, practices his kickboxing skills. This hobby turned into a field of research for Taggart, as he is studying the effects of martial arts on cognitive functions.

On a Saturday afternoon, Adam Taggart kickboxes at the gym. As a second-year doctoral student in kinesiology at the University, Taggart tries to hit the gym every day. To him, martial arts is more than a sport, an art, a culture; it’s also the basis of his research.

Taggart sold his personal training business in West London and moved across the pond to study the effects of martial arts on cognitive functions. After losing both grandmothers and an aunt to Alzheimer’s, Taggart observed differences in their degenerative decline. Namely, his more sedentary relatives deteriorated more quickly than the mentally and physically active relatives. Not long after, Taggart also met with an older and active martial arts instructor, who was in excellent health. These observations and experiences prompted Taggart to change careers, and, ultimately, his life.

“You’re sitting there with a picture of my grandad, age 20-something, and she goes, ‘Oh, that’s a handsome young man,’ and I’m like ‘Yeah, you were married to him for going on 60 years,’” he said. “And it suddenly comes back to her, and there’s this flood of emotion, and she wonders how she could’ve ever forgotten him. Within five minutes, she’s forgotten all over again.”

As of  2018, the Alzheimer’s Association reported there were 220,000 people in Illinois with Alzheimer’s. Like Taggart, other academics are also looking to prevent the disease and improve the quality of life for people with dementia.

Carol Mauck, a professor in social work and former owner of an adult daycare center, said how we view the disease can shape how we treat it.

“Instead of looking at the disease process as what people have lost,” she said. “We’re going to look at in the positive frame.”

Mauck stresses the importance of stimulation in aging populations. Stimulation comes in all forms, from physical activity to social engagement to ongoing learning. Mike Bius, a multimedia education manager at the Illinois Alzheimer’s Association, said lifestyle changes don’t prevent dementia, but they can certainly slow down the process.

“The more cognitive reserve you can build up by doing these activities we talk about, the longer it will take for this disease to take all your memory away,” he said.

Taggart will test how martial arts affect cognitive functions in college-aged students at the Exercise, Technology, & Cognition Lab under Sean Mullen, director of the lab. Taggart said what can be applied to someone at the peak of their cognitive function is also applicable to someone with Alzheimer’s.

“It’s like any technique that can improve an Olympic swimmer’s technique by one second is likely going to improve a non-Olympic swimmer by 10 seconds,” he said. “Because if you’re working at the high end of ability, every little step can add 1% improvement.”

For himself, Taggart knows, given his family history, he might one day be diagnosed with Alzheimer’s. And if that’s the case, he can’t do much about it.

Taggart said he’s not earning a Ph.D. for the fancy title or the clout; he thinks pursuing research is a path he would have been drawn to no matter what. He hopes other people will join the research efforts, saying they don’t need to have a personal connection to help. Taggart knows his study might not yield hopeful results. For him, it’s pretty simple: He has an opportunity to make a difference.

“People joke about my hero complex. I try not to take it too seriously,” he said. “Yeah, I feel like I can do something good. For me, that’s not a deep philosophical dilemma. It’s a resolve. That’s pretty straightforward — can you help? Yeah. Should you? Of course.”

Music provided by Roman Bulakhov  for “Overcast (Part 2)” via Icons8.