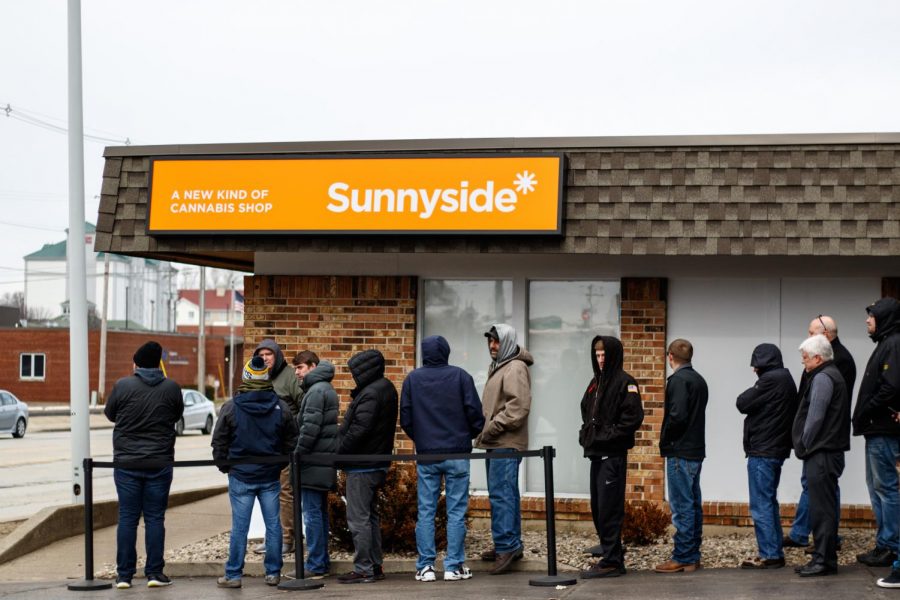 People wait in line at Sunnyside Dispensary on Jan. 22, a cannabis dispensary located on 1704 S. Neil St. Following the legalization of recreational marijuana in the state of Illinois, the C-U community has taken a variety of stances on the topic.

On June 25, Governor Pritzker signed into law the Cannabis Regulation and Tax Act, which took effect Jan. 1. The act makes legal the cultivation, processing, transportation and sale of cannabis by individuals and businesses licensed by the state of Illinois.

As Champaign has its highest age group lying between 18-24 for both native-born and foreign-born citizens, the way this act would influence young blood is important.

Jay Wen, sophomore in Engineering, said that he himself smokes cigarettes. Wen also said if cannabis is going to be healthier than smoking cigarettes and has the same effects, he might switch to cannabis, but he is not sure at this point.

“It gets people more excited (than smoking cigarettes),” Wen said. “I don’t know, maybe, it might be a bad thing, because overuse of marijuana will be very harmful. The worst part of it is that it makes people unconscious, and (cigarettes don’t) do that.”

His concern toward cannabis use is the combination of alcohol and marijuana causing people to lose conconscious — which could happen more frequently following legalization.

Yi Guan, junior in LAS, said he would not use marijuana even after it would be legalized; in his perspective, it should only be used for medical purposes.

“Marijuana is a gateway (to) drugs,” Guan said. “It ultimately (leads) to something worse, and I am pretty well-off without it.”

To address students’ concerns, Champaign City Council is working on passing the new ordinance of regulating use of cannabis. Ordinances are a civil, fine-only tool that allows law enforcement to address unlawful behavior in a non-criminal way, without involving the criminal justice system or a criminal record.

Without the ordinance, the violation of the act under the state law would still be considered criminal by the state, which would result in a criminal prosecution. The criminal record and jail time in place of fines would have significant influence on people who are under 21, especially college students.

“The city Champaign (has) implemented regulation to bring our city ordinance into compliance with the state law, which now it is coming up on (Jan. 1),” said Jeff Hamilton, the communications manager for the City of Champaign. “Our only concern was to bring our laws and ordinances into compliance to allow what the state’s allowing.”

Because the ordinances are predicting the future violations, Hamilton said, “The city of Champaign would modify ordinances to bring itself into compliance with the state law, and I don’t know about the particular of what is or is not allowed in the edibles. But if it is allowed by the state legislation, it would be allowed by the city ordinance.”

Springfield legislators are already discussing modifying the cannabis legislation in some ways. That is actually already happening at the state level; they are already tinkering with that cannabis law before it even goes into effect.

City of Champaign council also held study sessions to inform citizens what the new state law means, according to Hamilton.

Different than cannabis, cannabidiol products such as CBD oil have been allowed in Illinois for a long time. CBD products come in different ways, such as lotions and vapes. They attract customers’ attention with the advertisement that shows a cannabis leaf image.

Michael Ballerini, owner of 217 Hemp Co. located at 2000 N. Neil St., tells the difference between CBD and cannabis: “CBD is a cannabidiol from the hemp plant, which is the female plant of cannabis that produces more CBD concentrate — CBD is used to help with general wellness.”