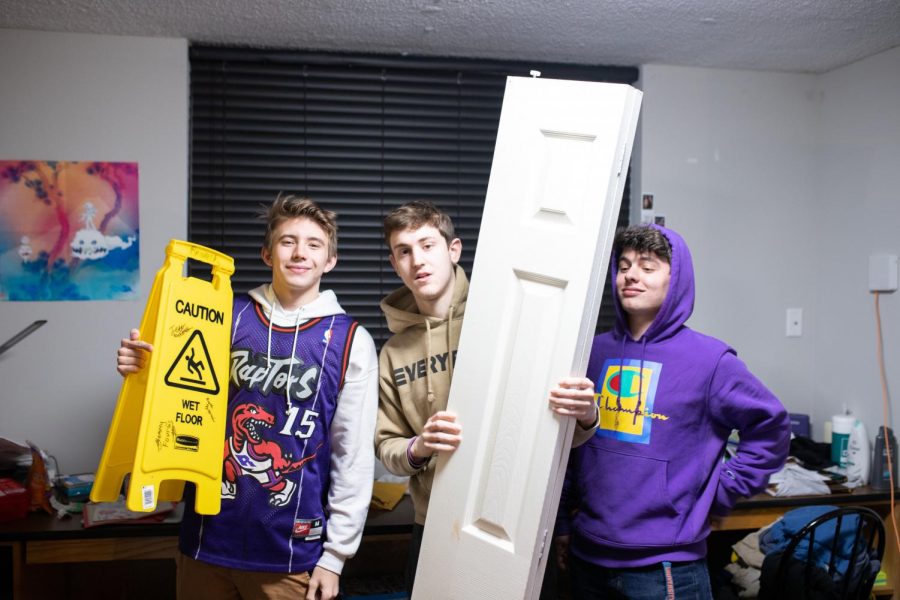 When the now-viral video sharing app TikTok launched in 2017, social media users gravitated to the new platform because it was relatively untouched and had unique content and features. TikTok burst onto the scene in late 2018 when the company merged with startup Musical.ly. The apps shared similar features for users, the ability to post 3-15 second lip-sync or comedy clips, similar to the former app service Vine.

Just three years since its launch, TikTok has garnered a mass amount of attention. The app has created social media influencers and famous content creators among younger generations. Celebrities such as Will Smith and the Jonas Brothers have joined the app and have gained millions of followers.

Users on the application go viral every day based on the content they create. Some of these viral content creators even attend the University.

Jett Koulentes, Sammy Fourlas and Ayal Zipris, all freshmen in LAS, moved into Bromley Hall together at the beginning of the fall semester. At that same time, they created an account on TikTok and started creating videos in their dorm.

“We really like incorporating stuff that happens in college dorms with kind of that ‘The Office’ vibe because that’s our environment, that’s where we’re living at,” Koulentes said.

All three are fans of the television show “The Office,” and they emulate the same humor from the show and incorporate the different camera angles into the content they produce.

TikTok has two separate pages where you can view videos. The “Followers” page shows recent videos of accounts that a user follows while the “For You” page suggests videos to the user based on what other users find popular and interesting by liking it. The group uses the #fyp as a way to increase the number of users who see the post.

“I like how you can get their comedy as well as TikTok comedy combined with all of the filters,” Zipris said.

The group later produced two other videos that have since surpassed their first viral video and helped contribute to their now 13,200 followers.

“I stole a wet floor sign from Bromley, and I was like, ‘we should totally do something with that because college students steal floor signs,’” Koulentes said.

In the video, Fourlas pretends to be the group’s RA, confronting Koulentes over the wet floor sign he had stolen. Fourlas badgers Koulentes in the video, saying they have him on video taking the sign as Koulentes admirably pleads his innocence. Then the camera pans to the wet floor sign sitting atop Koulente’s closet door. The video has garnered 3.2 million views and over 570,000 likes.

Koulentes was on his way back from a conference at the University of Cincinnati when he received a text from Fourlas with the news. The video has blown up.

“My mouth just dropped,” he said. “That was a crazy feeling. I couldn’t believe people loved the video, and that it got out there for everyone to see.”

Rowan Morgan, senior in Music, joined TikTok in March 2019. Her younger siblings were on the app and constantly talking about it, so Morgan wanted to see what all of the hype was about.

“The younger kids, they like to do dances and things, but my sister who is 18, she is more there for the funny, kind of Vine aspect,” Morgan said.

While the app was fun to have as entertainment, Morgan wondered how she could make her own mark on the new social media platform while incorporating her interests.

It was simple: music.

“I’ve always been a musician in some way,” Morgan said. “Whether it be piano lessons in second grade, I knew I loved to sing in elementary school, that’s when it started.”

Morgan quickly found fame on the app. It came when she posted a singing tutorial for the lower harmony of “Tonight You Belong to Me” by Eddie Vedder, which was viral at the time.

Over 1 million people have viewed the video since Morgan posted it, and it has been liked over 300,000 times. From there, Morgan grew into creating relatable choir meme content. She currently has 83,700 followers.

The app has attracted a fair amount of criticism — not necessarily from outside perspectives but rather its own users.

There existed a period of time when TikTok was becoming popular where younger users seemed to look down upon users who were college-aged and older for being a part of the community. Older generations were viewed by young users as cringy, embarrassing and too old for the app.

“I remember thinking to myself when we were debating making this TikTok account, ‘I was like no, there’s no way I’ll be on TikTok. That’s for tweens and stuff like that,’” Koulentes said. “Now everyone’s like, ‘that’s the funniest thing ever,’” Koulentes said.

The freshman group was aware of the possible criticism they would receive from their college peers; however, the app served as a unique platform for the three to produce comedy.

“Kids know what it’s like to be within this age,” Fourlas said. “There’s the funny sides of it. There’re skits that are so outlandish, but we all grew up on that same age of comedy.”

Becky Jacobson, freshman in DGS, was exposed to the app in high school. Her best friend at the time had over 100,000 followers on the app. This creative outlet piqued Jacobson’s interest, and she downloaded the app.

“I like dad jokes. I like pickup lines,” she said. “So I was like, I’m going to go knock on people’s doors and then say a pickup line and just get their reaction.”

One of the videos in the series received 1.6 million views and over 475,000 likes. Her followers continued to beg for more content.

Jacobson has had an opportunity on TikTok few users receive: the ability to make money from the videos and content she posts. Once a user reaches 1,000 followers, they are allowed to live stream on their profile to their followers.

“It was a grind,” Jacobson said. “I had a really committed following, and I would post every day. I’d post a really bad dad joke, and I was posting dad jokes until I could go live.”

Followers have the option to give gifts to the content creators while they are live streaming. Half of the gift goes to TikTok, half goes to the creator. Jacobson has made $150 from the app so far.

After posting videos for a little under a year, Jacobson’s views toward creating videos and worrying about the perception of them has changed. She worries less about the number of views or likes she gets and more on creating content she finds funny and just hopes others do, too.

“For the most part, I’m just trying to have fun,” Jacobson said. “I’m trying to bring a smile to people’s faces at the same time.”