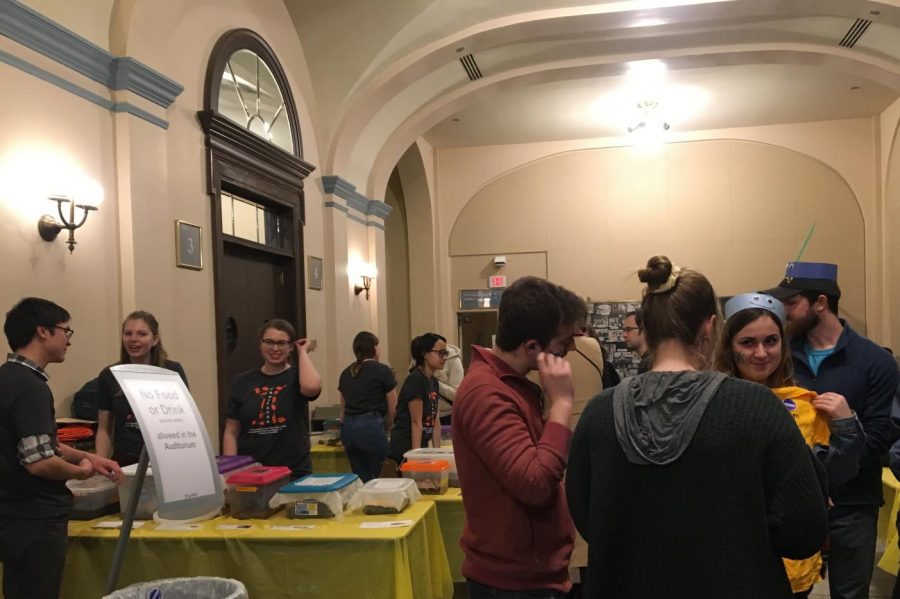 People gather at the entrance of Foellinger Auditorium for the Insect Fear Film Festival on Saturday. The theme for this year’s festival was Crustacea, moving away from the typical insect theme.

After 36 years of showcasing towering mutant insects on the big screen, the Insect Fear Film Festival made a radical departure in its 37th year by highlighting monstrous crabs and lobsters rather than insects in both of its presented feature films. The theme for this year, Crustacea, broadened the scope of the festival to the mainly marine arthropod cousins of insects, including shrimp, remipedes, isopods and other many-legged animals.

Though the festival’s main attraction is the insect-featuring films it presents annually, it also offers an art contest, a petting zoo and merchandise. The festival’s annual art contest displays often-inventive pieces centering around insects drawn by students from local schools, including one clever illustration alluding to Michelangelo’s “The Creation of Adam” but depicting mantises (“The Creation of Man-tises”). Volunteers donned crab-shaped hats, while one of the volunteers greeted visitors in a lobster suit.

The festival is operated largely by the Entomology Graduate Student Association. The EGSA uses the festival to raise funds by selling t-shirts and also as outreach to raise interest in entomology among the community.

May Berenbaum, head and Swanlund Chair of the entomology department as well as festival organizer and the presenter before films, founded the festival in 1984, four years after accepting her faculty position at the University. She’s been doing the festival every year since. Berenbaum, who coordinated the theme, said “it was a risky thing to move away from insects — based on the biology.”

The biological realities behind the arthropods with which she is so familiar guided her choices when selecting and presenting films. Berenbaum has seen many of the films the festival has presented, including those presented this year, three or four times each. Commenting on the artistic merit of the films, Berenbaum jokes “these are not prize winners.”

“I watch them once, to make sure they’re ok thematically,” Berenbaum said. “I watch them again, to get comments to make and to check the biology. Minimally twice, often more than that.”

Many of the festival’s offerings, including this year’s “Attack of the Crab Monsters,” are kitschy horror B-films from the mid-twentieth century, whose supposed thrills now read as humorous. For Berenbaum, part of the absurdism comes in the poor pseudoscience of the films.

“To see biologically what’s wrong with (the arthropod monsters), what’s anatomically wrong with them is amusing,” Berenbaum said. “These are bad enough that they circle back to being comical.”

Cockroaches, tarantulas and lubbers were among the perennially present species populating the insect and arachnid petting zoo, which visitors could hold or stroke with their fingertips. Given the entomology department maintains insects in captivity year-round for its various insect petting zoo events, providing the insects for the event was routine. It was sourcing the crustaceans that provided a new challenge to the long-standing festival.

One of Berenbaum’s own graduate students, Charles Dean, provided the cherry shrimp as crustacean representatives for the petting zoo. For Dean, who has been keeping his shrimp for several years, they are a “fun and colorful addition to (his) household.” Prior to organizing for this year’s theme, Berenbaum hadn’t even known about Dean’s shrimp tanks.

One tank displayed the cherry shrimp shooting around the tank like sparks as they fluttered their legs through the water. But the shrimp were dwarfed by their evolutionary cousins in neighboring tanks. Another festival volunteer demonstrated the pugilistic nature of the blue crabs as they fought off the prongs, meant to handle them, with their claws.

Both entomology graduate students, along with undergraduate volunteers, manned tables, introducing visitors to the insects and crustacea populating the petting zoo. Conversations often developed between the volunteer handlers and visitors who wanted to learn more. Lincoln Taylor, senior in LAS, who volunteered to display crustacea, was comfortable enough to balance a grasshopper on his glasses for a picture. For Taylor, a Champaign-Urbana native, the festival has more history than for the average undergrad.

“The first time I went to the festival was in second grade. I’ve been going almost every year,” Taylor said. “I first got introduced to the festival because of the art show.”

Taylor won one year with an illustration of ants. Now, in his first year volunteering, he was on the flipside of that situation; he’d set up the art contest entrants on display himself. Taylor’s experiences coincide with one of the benefits of the festival, which is to nurture comfort and curiosity in insects with children early on.

Berenbaum has not decided on next year’s theme, and with yet another successful year under its belt, the festival cements its place in the community further.

“We were ecstatically happy with how it went because it was a big departure for us,” Berenbaum says.