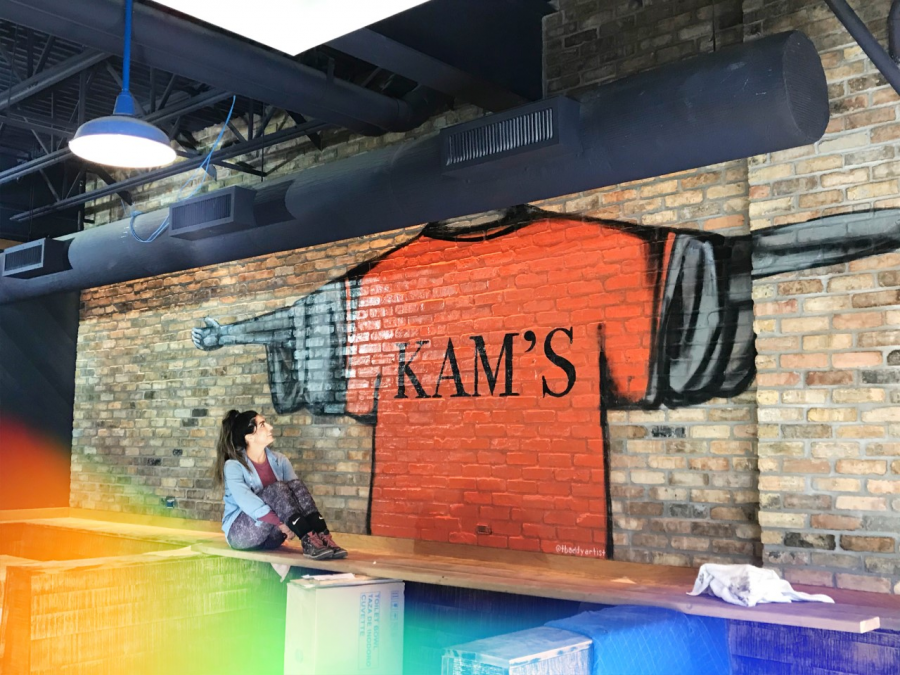 Photo courtesy of veronica martinez Chicago-based painter Tracee Badway poses in front of her mural of the Alma Mater statue wearing a KAM’s jersey, which resides in the bar’s new location at 102 E. Green St. The original mural at the previous KAM’s bar on Daniel Street was a popular photo spot for students.

When KAM’s, one of the University’s most popular undergraduate bars, relocated to a new building this winter, every step of the process was anticipated by fans of the establishment. Like its predecessor, the new KAM’s displays a mural of the Alma Mater donning a KAM’s jersey on one of its walls.

The Daily Illini talked to Tracee Badway, the Chicago-based painter who reincarnated the Alma Mater at the recently inaugurated KAM’s location, about her family history with the University and her painting process. This interview has been edited for clarity.

The Daily Illini: Did you have any previous connections with the University or with KAM’s before painting the Alma Mater or was this new to you?

Badway: I actually am very well versed with KAM’s. My brother went to the University, so I visited him when I was in high school and in college. He was the one who exposed me to KAM’s for the first time. So many people I know went to KAM’s. But it was so long ago I don’t remember where the original location was. My little cousin Alex goes to the University now; he’s so stoked about it. It’s definitely a family college.

DI: The previous Alma Mater at KAM’s was an instantly recognizable photo backdrop and, therefore, very prevalent on social media posts. Does the context in which your work is displayed — in this case, at a popular bar — alter your painting process at all?

Badway: Honestly, my goal was to be as true to the original design as possible. Because I knew people would have their opinions, whether they liked it or not. Because there’s always a little pushback with something new.

DI: To what extent did you reference the previous Alma Mater mural? Was it your choice to paint only the torso in this iteration?

Badway: That was more of the designer’s choice. They wanted it to be something different, something a little more simple. I know when I finished I was like, I miss the head a little bit. And I know that other people have said that, too.

DI: How long did the Alma Mater mural take you?

Badway: If I would have been alone, it probably would have taken me two days. But because I had such great help, it took me three hours, I think.

DI: Who helped you paint?

Badway: My dad, John Badway. He is at the beginning of his retirement process, so I’m forcing him to be my assistant. He knows all about the University because his son went here. The other person who was there was my personal assistant, Veronica Martinez.

DI: Was painting the Alma Mater any different than other murals you’ve done, in terms of techniques, environmental considerations, etc.?

Badway: Every single job I do is so different. You have to think about material use and then surface. I had to work on brick, which is very challenging. I work in oils, acrylics, spray paint — I work in all mediums, so this one I just made a decision to spray paint, and I went from there because that was easiest. But with spray paint I had to consider that it was indoors, and that’s chemically not OK for everybody there. So then you open the door, and it’s minus 20 degrees outside. There’s so many factors to account for.  Most jobs I have the opportunity to see the wall before I paint, but with this job I just showed up, so I think one of my challenges was not seeing the wall beforehand.

DI: How would you describe your style to somebody who’s never seen your work?

Badway: I would say naturally I’m a representational artist. I was trained as an oil painter. But as my career progressed — I’ve been doing this 13 years professionally — I found clients who needed abstract or landscape or impressionism … I found people needed all those things, and I realized I can do all those things. So I work with the client and find the style they want. I definitely don’t have a style anymore.

DI: Of all the work you’ve done, what’s the painting you’re most proud of, and why?

Badway: It’s hard to answer that, to be honest. Sometimes I get paid a lot of money, and I’m proud of the income I’m making. But sometimes I get paid zero dollars for something I make in the studio I’m technically more proud of. This year I finished a painting of my grandmother and her sister. It’s two old women basically arm wrestling, and I’d say that’s my favorite recent piece that I’m proud of, because it has representational values as well as a surreal quality. I also did all the new buildings in Wrigleyville. The Zachary Hotel, Joe Maddon’s Post, Smoke Daddy, Big Star, the Budweiser Brickhouse. I did all those in one summer when the Cubs won, and that was a pretty big deal, too.

DI: Currently, you’re working on what you’ve called your Toilet Selfie series, which are portraits painted on 6-foot canvases. How did that series originate?

Badway: So, it started with a late night toilet selfie I took of myself. I sent the picture to a friend or two, and they were like, that’s a great photo. And I told them, it was on the toilet. After that, they all started sending me photos of them on the toilet. Late night, after a few drinks, hilarious pictures, out and about. Then I started randomly painting them, 6-feet tall. So I’d post them on social media, and I’d get random people sending me, on Snapchat and Instagram, pictures of them on the toilet. I probably have 2,000 pictures of people on the toilet. Some of them are random people I’ve never met. I’m very busy with commissions, but I’d very much like to continue that series.