Cities do not wish to profit from parking meters 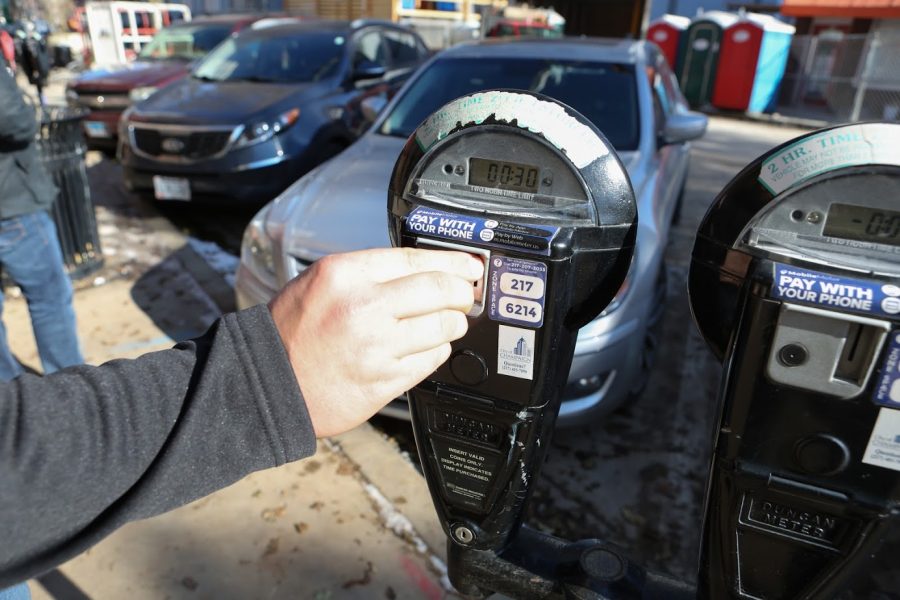 A man pays for his parking spot outside of Evo Cafe on Sixth Street on Nov. 15. Parking on campus will only be enforced from 5 a.m.-4 p.m from Nov. 4 to March 8.

Cities have seen an increase in revenue from parking meters, especially since they first offered mobile parking apps to residents and visitors.

Mobile apps are not a large portion of parking transactions, as people tend not to use them to pay for parking.

Elizabeth Strickert, marketing communications manager at Passport, said that some cities only take parking payment via mobile applications, but did not say which ones.

Americans are increasingly turning to smartphones for everyday tasks, and cities offer parking apps for residents and visitors to pay for parking in lieu of meters.

Parking applications can also be used by cities to regulate how many spaces are available.

University Professor, Lewis Lehe, earned his PhD from the University of California, Berkeley. When Lehe lived in the San Francisco Bay Area, he utilized SFpark, the mobile parking app in San Francisco.

Lehe said that SFpark’s goal is to make sure there is one free spot on every block in the city.

“They don’t want people to be cruising around, looking for parking, creating traffic,” Lehe said. “At times of day when there would otherwise be no space on the block, they raise the price of parking a lot so that people don’t park as long.”

Cities often have parking apps unique to the city or metropolitan area. Champaign, Urbana and the University of Illinois all use the MobileMeter app for parking management.

Passport is the parking app company behind the MobileMeter app. Strickert said that Passport manages parking apps for 40 cities, ranging from Champaign, Illinois, to Portland, Oregon.

Strickert was unable to say which mobile app was most popular, but did say that usage varies based on city populations and how many people pay for parking through a mobile parking app.

Mobile parking apps have been released in cities over the last several years. Champaign began using MobileMeter in 2015 and Urbana has used MobileMeter since 2016. The University of Illinois began using the service in 2018. In that time, the city has seen parking revenues increase, but Kris Koester of the Champaign Public Works said that the increase in parking revenues has been offset by a decrease in parking ticket revenue.

The city of Champaign also changed the parking system in 2015 to give citizens one free warning each year before issuing a parking citation.

“What we did is we went to what we call ‘an accumulating’ fine structure,” Koester said. “Everybody got a free one the first year, and most people really appreciated that.”

Koester added that mobile apps have led to a decrease in parking citations. Parking enforcement with cell phones as a parking meter can be challenging, but Koester said police officers and parking enforcement check by logging into Passport’s database of who has paid for parking via the app.

Since MobileMeter was released, the city of Champaign has seen an increase in parking revenue, which includes parking meters, permits, garages, fines and fees. Champaign generated a revenue of $2,992,840 in 2014, the year before MobileMeter was launched, per Koester.

Champaign is not the only college town within the state of Illinois to contract with Passport for its own parking app.

ParkEvanston is run by Passport, just like MobileMeter. Champaign and Evanston are demographically similar but Champaign has about 13,000 more residents, according to the U.S. Census Bureau.

While cities’ mobile parking apps have about the same adoption rate, the two apps vary greatly in user experience and features.

ParkEvanston, launched in 2017, is a newer app than MobileMeter, but has several features that MobileMeter does not have.

For instance, ParkEvanston allows people to pay parking citations through the app. ParkEvanston also lets people move their time with them if they move their car during the time in the Parking Transfer feature, which was released earlier this month.

Using parking apps is not a guaranteed flow of income for the municipalities that contract with a third party to provide a mobile parking application.

One expense that comes up is paying the company to host and maintain the app. Marty Paulins, UIUC’s parking director, said via email that the cities of Champaign and Urbana as well as the University of Illinois, pay a collective $12,500 each year to Passport to run and license the MobileMeter app. MobileMeter charges $0.25 per transaction as a convenience fee.

Some cities have a different structure. Mike Rivera, interim parking services manager, said that he was not aware of a specific licensing fee that Evanston pays to Passport, but that users pay a fee to cover costs. ParkEvanston users pay $0.35 per transaction.

People also pay for parking with more than their wallets, as they have to give credit card and other data to Passport to use the app, but the company says purchases are secure.

“We collect the consumer credit card information securely,” Strickert said. “We follow all PCI standards for privacy and security with that data, and then we process the payments.”

Cities also have incentives in place to encourage people and businesses to use mobile parking apps. In Champaign, there are incentives such as merchant validation, where businesses can help cover the cost of guests’ parking as a way to increase business.

Mobile wallets are increasingly popular, and cities have found ways to include them in their parking apps. The cities also use mobile wallets as a way to get residents and guests to pay for parking via mobile apps.

Koester said, by email, that the city offers incentives for people to use the parking app. For example, if someone loads $10 into the MobileMeter wallet, he or she gets an extra $1 to spend on parking.

Evanston takes a different approach by waiving the convenience fee for transactions completed through the mobile wallet.

While the incentives are one way to get people to adopt the app, cities also benefit from people using the app because it serves as another source of income.

While parking apps are in their infancy in the U.S., they offer a way for people to pay for parking without feeding a meter. Lehe thinks that over time, parking apps will become ubiquitous.

“Traditionally, parking has been mostly free because it’s difficult to transact for it,” Lehe said. “I don’t think there’s been a big impact from parking apps, but they’re definitely expanding.”