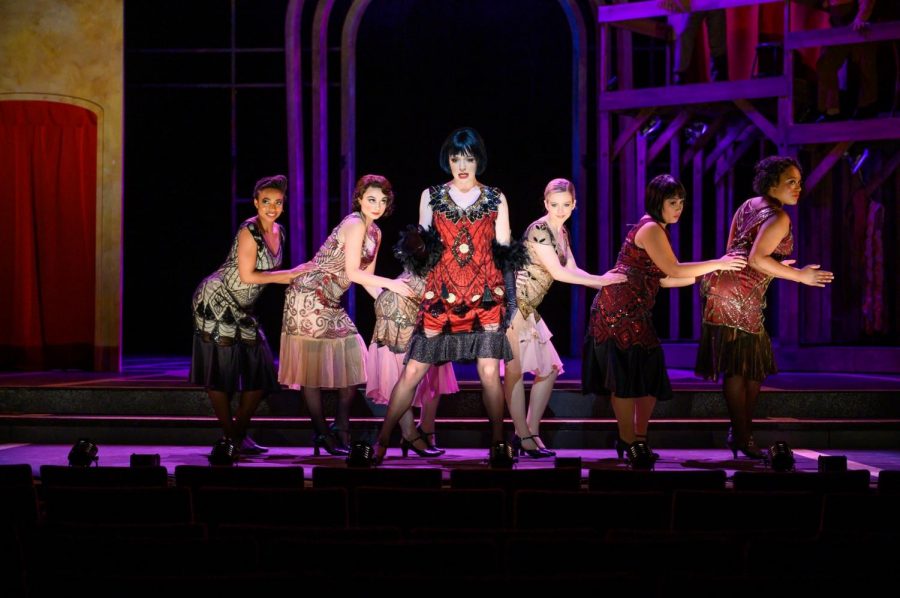 The cast of “Cabaret” performs during a dress rehearsal at Krannert Center for the Performing Arts, located at 500 S. Goodwin Ave. The show runs Thursdays-Sundays until March 8.

Suddenly, from the dark, the red-lipped, stiletto-clad Masters of Ceremonies at the eccentric Kit Kat Klub steals the spotlight and begins singing “Wilkommen,” welcoming the audience into the whirlwind world of the 1930s, set in a decadent cabaret in a pre-Nazi Berlin.

In celebration of its 50th anniversary, Krannert Center for the Performing Arts presents a dazzling yet thought-provoking rendition of “Cabaret” in conjunction with Illinois Theatre, Dance at Illinois, Lyric Theatre and the School of Music. Showing Thursdays-Sundays until March 8, the performance showcases striking staging and sets, extraordinary talent in these Illinois departments and the timeless message of cabaret.

First performed in 1966 on Broadway, “Cabaret” became an extremely popular Tony award-winner on stage, but the 1972 film starring Liza Minnelli made “Cabaret” a household name.

The musical is set in 1931 Berlin, starring an American novelist, Cliff Bradshaw, and the star of the carefree Kit Kat Klub, Sally Bowles, during the Nazis’ rise to power in Germany. The musical contains many subplots: a romance between Fräulein Schneider, owner of a boarding house, and her Jewish suitor, Herr Schultz, and a relationship between Sally and Cliff. Especially noticeable in the musical is the ominous, political undertone as the Nazis rise in power.

Depicting urban, German life in the early 1930s, Cabaret sits on the brink of the Third Reich, at the end of Weimer Republic’s reign from 1919-1933. The unpopular Weimar Republic had to carry the economic burden of World War I and the economic collapse with the hyperinflation of the German mark.

However, the Nazi party’s promises of financial stability and increased employment appealed to the working man who suffered, and the party was supported by the right and moderate-left wings. This support by the average person is masterfully depicted in “Cabaret” as friends and neighbors join the party; however, the performance’s menacing undertone foreshadows the party’s future.

Julie Jordan Gunn, professor in FAA and co-director of the Lyric Theatre program selected “Cabaret” because “it’s a fantastic work that speaks to all times and places because it was written around the time the Krannert Center was being conceived and because it has lots of opportunities for students to sing, dance, act, play and design.”

One standout aspect of this performance was the amazing music and band directed by Gunn. She played the stand-up piano with gusto, which was strung with lights and complete with a smoking cigarette on the top.

Unlike most performances, the band took part in acting in the show by being on stage, not hidden in the orchestra pit. This ingenious addition created a jazzy and relaxed feel, allowed the audience to recognize the musicians throughout the show and really made one feel they were at a cabaret.

“The music for ‘Cabaret’ is special, in that the band is part of the action onstage,” Gunn said. “We are the Kit Kat Klub band, and in costume, drinking and smoking and playing with the Kit Kats. The styles range from traditional Broadway kick lines to soft shoe, from classical ballads to German patriotic anthems.”

Despite its difficult songs, intense emotions and different scenes, the talented cast and crew of “Cabaret” are successful and perform without pause. The sets and staging reflect the tone, either grandiose and lively, or bare and dark, and the impressive display of singing, dancing and acting engages the audience.

“It’s really great,” she said. “I try to come as often as I can because I like American opera, so it’s a real treat to see this.”

“(My favorite part) was when Herr Schultz sang ‘It Couldn’t Please Me More’ to Fraulein Schneider,” Sanchez-Plesha said. “I really loved the rawness and emotion I could feel throughout the piece and how it was motivated by the simplest of actions.”

However, the University student also recognized the disturbing, anti-Semitic undertones and foreshadowing, remarking that, “the last portion of the show touched me the most, particularly the when the Nazis were coming into power.”

“I definitely recommend the show,” she said. “The choreography, execution of song, set and performance as a whole was beautiful.”

“Cabaret” continues through next weekend and it is a thought-provoking work reminiscent of our current day.

Gunn promotes the show as depicting “a world many people will find reminds them of our current day.”

“It’s hilarious, spectacular, horrifying and very touching,” she said. “I hope to see a lot of students there! I know you will love it.”

So, echoing the sentiments of Gunn and the words of the famous title song, “Come to the Cabaret!”