Illini cat show draws cats from all corners of the country 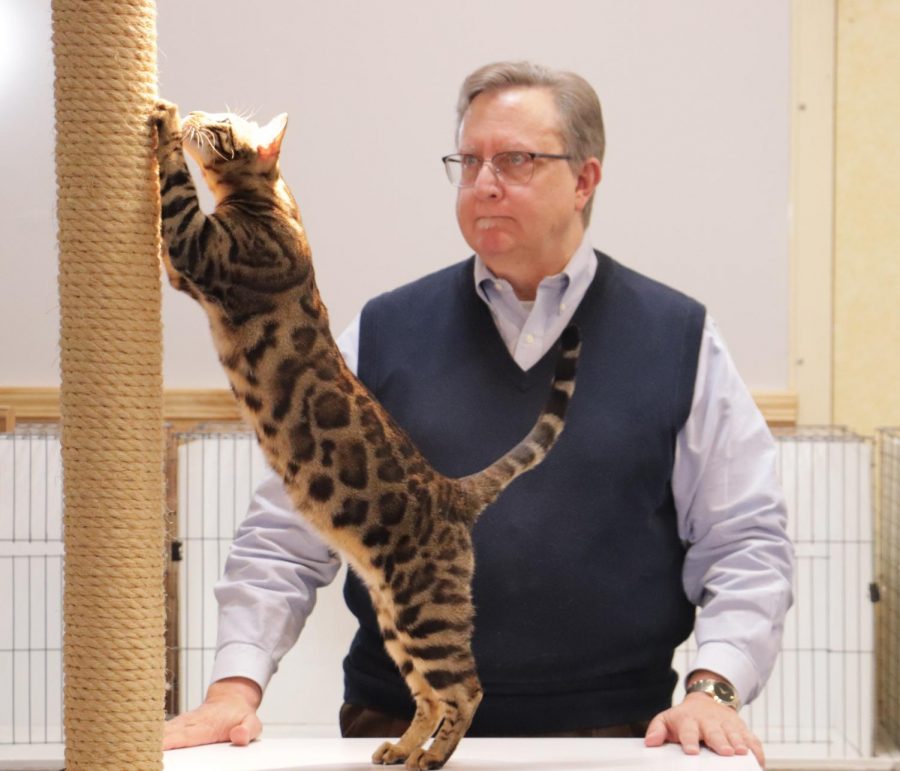 Judge Jeff Janzen considers a cat while conducting the all breed competition.

As soon as Miles the cat was woken up by his owner Beth Grant-Field, he was ready for the contest. The exotic shorthair cat, a little over two years old, began playing immediately. While on stage, he was captivated by the scratching board and the cat toys available, winning the judges’ affection within only a few seconds. The long trek from Texas to Champaign had little impact on Miles’s performance.

The Illini Cat Club held the 28th All Breed Cat Show at Radisson Hotel & Conference Center Champaign-Urbana on Saturday and Sunday. More than 1,000 visitors came to see the cats from all over the nation compete, and 198 cats traveled from all parts of the U.S. to compete in the eighth-ring show.

Grant-Field said she has been taking her cats to all kinds of contests in the U.S. since 1990. These contests provide a chance to show what she said she thinks are the best examples of the breed.

“This year I am fortunate enough to have a kitty that is a strong competitor, and he is now staying national in standing,” said Grant-Field.

This strong competitor is Miles, who is now ranked 12th in the nation in his breed. In the Illini Cat Show, Miles won the second-best all-breed championship and the best cat of his breed. At his age, Miles was not neutered, so he could compete in the grand championship.

Kittens have to be four months old to enroll in competitions. In the adult group competitions, if cats are spayed or neutered, they can only enroll in premiership class contests. Unaltered cats are allowed to compete in the grand championship.

Mary Auth, the show’s secretary, said the Illini Cat show is one of the biggest cat competitions in the U.S. considering the high number of entries for the show. From last year to this year, the number of entries has grown from 160 to 198. She also said the show has the best championship count.

This is important for the Illini Cat Club because they use this show as a fundraiser. The entry fees from the cat owners typically pay for the cost of putting on the show; the profit for the Illini Cat Club comes from gate tickets. This year, the organization made between $6,000 and $7,000, according to Auth. They will donate this money to several feline-oriented organizations in the community, such as Catsnap and Champaign County Humane Society.

Several non-profit rescue organizations join this show. Their information desks were located in the hallway outside of the exhibition for visitors to view. Every organization brought a cat to adopt, though. Due to the space limit, there were not as many cats up for adoption at the event itself as they had last year. Auth said this show gives these organizations an opportunity to inform people that rescue cats are available.

A cat will not be able to win this competition just by being fluffy and having big eyes. Each of the candidates has to pass several exams in order to win the show. The breed council voted for a standard at various points for categories such as eyes, ears and coat. However, for the other aspect of the competition, judges test pets’ personalities.

Jeff Janze has been a judge for 20 years. He is accountable for several competitions in this show, including the household cats competition.

“For me, there are three criteria when I judge a household pet,” he said. “They have to be clean. Number two … I like them a little bit heavier than I like them skinnier. And third, most importantly, they must not bite the judge.”

The cats showing their playful personality is a bonus to Janze. The better they play, the better for everyone involved, he said.

At the Saturday competition, Janze said, “It was a difficult decision today to pick the best one.”