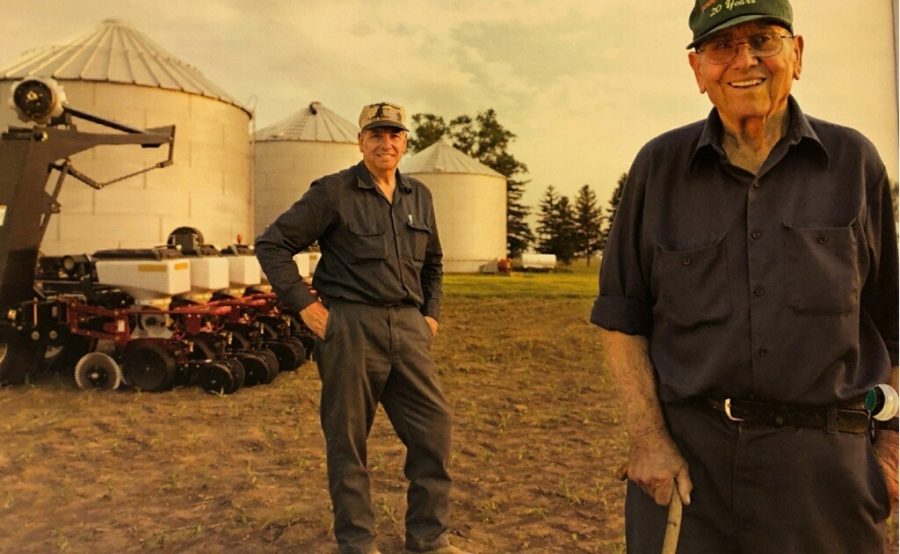 Cary Dehm and Glen (left to right) pose in front of their farm outside of Chatsworth, Illinois. The pair has adapted to the everchanging Illinois weather, altering their farming techniques in response to floods during planting season.

Illinois farmer Delmar Graham retired 14 years before he felt the effects of climate change on the land he made a living out of.

During the farming seasons, he used to go to bed wondering if tomorrow there was going to be any rain at all.

The career farmer near Hoopeston, Illinois, had plenty of moments during a lifetime of farming wondering if he was going to wake up the next morning to a long-awaited rainfall for his withering crops. He couldn’t help himself from interrupting when asked if he recalled those long nights.

“Oh, yes. Yes, yes, yes,” Graham said with a laugh. “I really don’t know how to explain it besides that it’s really tough to go through. That was before we even had the insurance programs.”

The rainfalls have come for farmers in central Illinois the last several years since Graham’s retirement, but they’ve come too soon and ill-timed. Climate change has brought the spring rains early in the farming season, causing fields to be flooded and keeping the farmers in the area from being able to get their equipment into the fields. Illinois farmers have felt the effects of climate change as temperatures and carbon dioxide levels have risen significantly, affecting the crop’s growing conditions and how much revenue they bring in.

Cary Dehm (the reporter’s grandfather), 72, is a lifetime farmer from Chatsworth, Illinois, roughly an hour north from Champaign-Urbana. He lives in his white, two-story house a mile outside of town with his wife, Jane.

When you walk down his sidewalk and turn to your left, you see his massive green barn where he stores his farming equipment. Five springs ago, Dehm took out his equipment to begin planting season. When he arrived, his fields were submerged. Fifteen days passed before he could begin the normal 30-day planting season. The season’s timeline didn’t conform for the farmers, so they were forced to accept the two-week planting cycle and the shorter farming season.

What became a requirement for farmers all-around central Illinois was working longer and sporadic hours. Farmers like Dehm started the season handicapped and 15-feet behind the starting line, so any opportunity they had to get out into the field, they climbed into their machines and went. Their already high 12-hour workdays only rose, he said, as farmers were forced to adapt to their circumstances.

An even worse outlier to the conditions revealed itself last season to Piper City, Illinois, farmer Mark Hendricks. Hendricks said his fields hadn’t flooded during planting season, which begins the last week of April, in the years prior. But when he went to plant this last cycle, his fields were drenched, keeping him from beginning his season. A whole month passed before Hendricks could get into his fields and begin planting, two weeks longer than how Dehm had seen the season shortened.

“I’ve been farming for 40 years, and this was the only year like that in my farming career,” Hendricks said. “It was that bad.”

Hendricks said since he planted so late, by the time it came to harvest his corn, it hadn’t matured enough. The moisture levels jumped from their target level of 21% to 30%, and as a result, he spent four times as much on propane during the drying operation for the crop, using 60 gallons this past year compared to the normal 15 gallons.

Nevertheless, the corn still had issues after this point. The corn’s moisture levels were still too high, which then resulted in no air being able to move through the corn once it was placed in the grain elevators.

“This whole corn crop has quality issues,” Hendricks said. “We had no choice but to (harvest) it wet because we were running out of time.”

In terms of how much revenue he brought in this last cycle, Hendricks said, “this was a year forget.”

“It was a non-profitable year,” he said. “Any farmer that said he made any money on the corn that was planted in June is full of s—.”

The early spring rains aren’t the only changes farmers are having to adjust in the recent farming seasons. Graham, Dehm and Hendricks all said they’ve noticed longer dry spells and heat waves during the seasons, and when it does rain, it pours an unhealthy amount for the crops.

Carl Bernacchi, professor in LAS , is a researcher for the United States Department of Agriculture. His research studies how atmospheric and climatic change has impacted crop physiology.

Bernacchi said because these irregular conditions have been occurring in July and August the last four to five years, then its “probably driven to some extent by climate change, maybe entirely climate change.” He said he doesn’t fully know because the research is still ongoing at the moment. If these conditions remain consistent or rise even more and nothing is done to the crops to adapt to said conditions, then that can lead to massive effects on the world’s supply of agricultural goods.

“When you have really productive agricultural systems like we do in the midwest, we have the most productive ecosystem on the planet when it’s at its peak, all it would take is a small drought to use the water that’s available in the soil to make the ecosystem come to a screeching halt,” Bernacchi said. “On top of that, when the ecosystem comes to a halt, physiologically, (the crops) are not doing what they should be doing, then all that energy isn’t going to be evaporating water and keeping things cool, it’s going to keep warming up and warming up and that’s something that’s probably going to keep happening more frequently as droughts keep coming.”

Professors in Engineering Lisa Ainsworth and Stephen Long at the University of Illinois both base their research on discovering how to genetically modify the seeds to the hotter and denser carbon dioxide climates since there’s nothing that can be done about the weather itself.

Ainsworth, like Bernacchi, is a USDA researcher. Her work focuses on understanding the molecular responses the plants have to the global changes in the climate and atmosphere and breeding the crops to then adapt to those conditions.

A key result of the early research Ainsworth and her team’s done has been noticing that the plants do have genetic variations to the climate and ozone changes, meaning the plants’ genes could be altered. She wants her research to bring more awareness to farmers so they know they do have alternative options.

“We can make different changes that can at least slow the rate of climate change, and I think that education is equally important to having more options for farmers,” Ainsworth said.

Long’s research, more specifically, centers around bioengineering the photosynthesis process with the crops to be more sustainable and adaptable to climate change. While his research is on-going, Long said they’ve had success in finding ways to bioengineer the soybean to the changing conditions.

“We have been able to identify germplasm that does better under elevated CO2,” Long said. “We’ve also made some transgenic manipulations that allow the soybean to do better under the higher temperatures. Temperatures here are pretty optimal, but if it goes higher, it’s not as good for soybeans as it has been. Adapting soybeans to those conditions is going to be important to keeping (Illinois) competitive.”

Long added the University does supply germplasm to commercial breeders.

Farmers like Hendricks will be relying on researchers such as the ones at the University to help their way of living. But at the moment, Hendricks is feeling hopeless.

“All I can do is fertilize, plant the best genetics that are available and hope mother nature is good to you,” he said.  “Other than that, there’s nothing much more a farmer can do.”