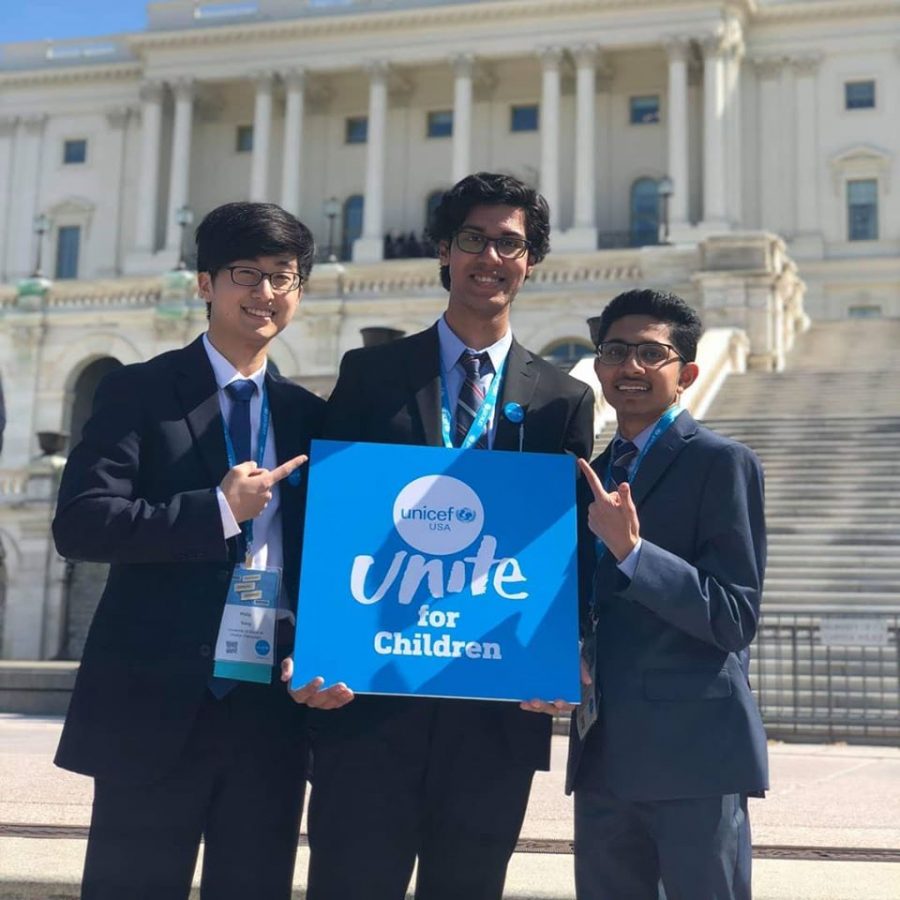 Philip Song (left) poses with Avishek Biswas (center) and Utsav Vachhani with a UNICEF sign in front of the White House in Washington D.C. on March 21, 2019.

Philip Song began planning the annual UNICEF gala when he was elected as gala committee head in the summer of 2019. It was held on Feb. 15 at the Illini Union and focused on South Sudanese children. Around 200 people participated in this event, and the organization raised significant funds from the entry tickets. The gala included a formal dress code, buffet dinner, speeches and performances for the participants and attendees.

According to Song, this year’s gala was significantly different from previous years. The team organized the entire event from scratch and tried to reinvent the gala. He said that this crisis topic was chosen because the team thought that it would bring people together.

Khalil Pillai, a next-generation board member of UNICEF USA., attended the gala as a guest speaker. At the gala, he shared stories of his travels and the time he spent in the field in South Sudan on behalf of UNICEF. At the Q&A that followed his speech, Pillai answered several questions from the attendees about UNICEF’s cause and the organization as a whole.

Utsav Vachhani, treasurer of UNICEF at UIUC, said that fundraising events are the best way to attract potential members. Vachhani is in charge of the fundraising spreadsheet, which will be released on the organization’s social media. All funding goes to UNICEF USA and Vachhani calculates the beneficial profit and the proportions that the group will contribute to the national UNICEF at the end of the year. As a fundraising event, UNICEF at UIUC was able to raise $2,881 for its parent organization from this year’s gala.

The annual gala is just an example of their traditional fundraising events. Besides the mission of protecting the world’s most vulnerable children, UNICEF at UIUC also serves as a local community service organization. According to Stacey Chui, the head of the advocacy committee, this organization is one of the biggest community service organizations on campus. Over 600 members signed its newsletter, and around 30 to 50 people attend the monthly meetings. At these meetings, members go over the current topics including fundraising events. They also take that time to educate their members.

UNICEF at UIUC holds at least one event per month. They will sometimes do fundraising on the quad and in restaurants. They held a volunteering event for the refugees at the I Hotel in Champaign on March 7. The organization continues to plan for its future events. Currently, members have an idea for a donation run to aid the organization Books for Prisoners on April 10. They are also planning a volunteering event at a soup kitchen.

“We are trying to focus on peoples from a local to global perspective; that is why we are serving the local community,” Chui said.

In Washington D.C., the national UNICEF summit was postponed due to the outbreak of COVID-19. “It was a little bit sad to hear about it because last year we all went to the summit,” Chui said. “A lot of new members were planning to go to the summit and have some professional experience in the field.”

This year’s gala helped set the foundation for the future, according to Song.

“We know that we have limited resources and a lot of last-minute things happened this time,” he said. “But we are confident that the upcoming galas and events will be much more extravagant, thought out and will help many more.”