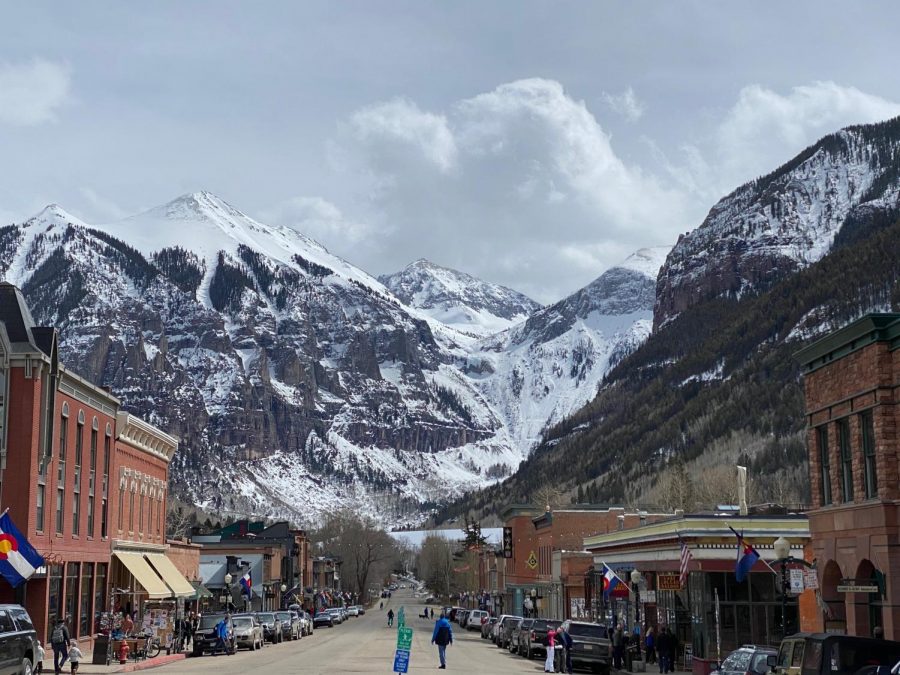 Pictured above is Ajax Peak in Telluride, CO, Ajax Peak. Eric Schmidt and his family stayed in Telluride for their short spring break trip.

As the COVID-19 virus continued to sweep across the nation, college students were faced with difficult decisions at the beginning of the week. Most had already booked flights and paid for their spring break trips in full, but amidst the outbreak, some decided to cancel while others opted to enjoy the experience.

Olivia Mazzone, sophomore in LAS, went on her spring break trip this past week with six of her sorority sisters in Delta Delta Delta to Fort Lauderdale, Fla. While their plans and trip were affected by the virus, the group made the most out of their week off.

The group practiced social distancing naturally, as a majority of their time was spent on their friend’s houseboat, where she lives permanently.

Florida was at level three of COVID-19 infectivity at the time of their trip. This classification created uncertainty among the group about getting home and what they could and could not do while in Florida.

“It was a little scary when we were getting all of this new information on it, because we were starting to learn how easily transferable it was,” Mazzone said.

“We kept being told to practice social distancing, but we were still in groups at public places, so it made us all feel a little nervous and ashamed — that maybe we shouldn’t be out here putting other people at risk,” Mazzone said.

As more and more places and activities began to shut down, the group spent a majority of the time practicing social distancing on the boat out in the Atlantic Ocean.

“We were a little nervous about going during all of this but once things started getting closed, we ended up just staying on the boat most of the time and still had fun,” Mazzone said. “We didn’t really need to go to any places or be put at any risk.”

Originally, 10 additional people planned on going with the group and staying at a hotel nearby. As more information became available on the virus and the effects it would have on everyday life, they dropped out of the trip.

The group had their tickets to return home scheduled for Saturday, but after Illinois Gov. J.B. Pritzker announced a stay-at-home order, they rescheduled their flights and flew home Friday instead. When Mazzone arrived home on Friday, she immediately began self-quarantining.

“My parents are making me strictly self-quarantine on my own,” Mazzone said. “When I first came home my mom wouldn’t let me touch anything or my dog until I showered. I’m just being a little bit more careful.”

Eric Schmidt, sophomore in Engineering, along with his dad, brother and two uncles, only enjoyed four hours of their spring break trip to Telluride, Colo.

“The way we saw it, it really wasn’t attacking younger people, so we thought it was a calculated risk,” Schmidt said. “We were still going to get some great skiing.”

Four hours after their plane landed in Montrose, Colo., the Governor of Colorado issued a mandatory shutdown of all ski lifts for the rest of the season in an attempt to abide by social distancing practices.

The family flew back to Chicago the next morning, never experiencing the fresh powder or vast ski resorts in the area.

“We tried to get out as fast as we could,” Schmidt said.

Although they made an untimely exit, the group was never afraid of the virus affecting their trip or their own health when they discussed the impact of the virus a few weeks ago.

“With respect to health, I didn’t think I was necessarily in danger, and the rest of our group didn’t either,” Schmidt said. “We thought that, at the time, it was a good idea to go out and enjoy that last little bit of fun before the quarantine set in.”

Had the ski lifts not shut down, Schmidt and his family would still be skiing the slopes in Telluride. They understood the risks they took but ultimately made a decision that was in their own best interest.

“Within a year, it’s not like the virus is going to be gone, and I don’t expect us to be in quarantine for another year,” Schmidt said. “I think our decision was based in part on the understanding that it’s a temporary quarantine.”