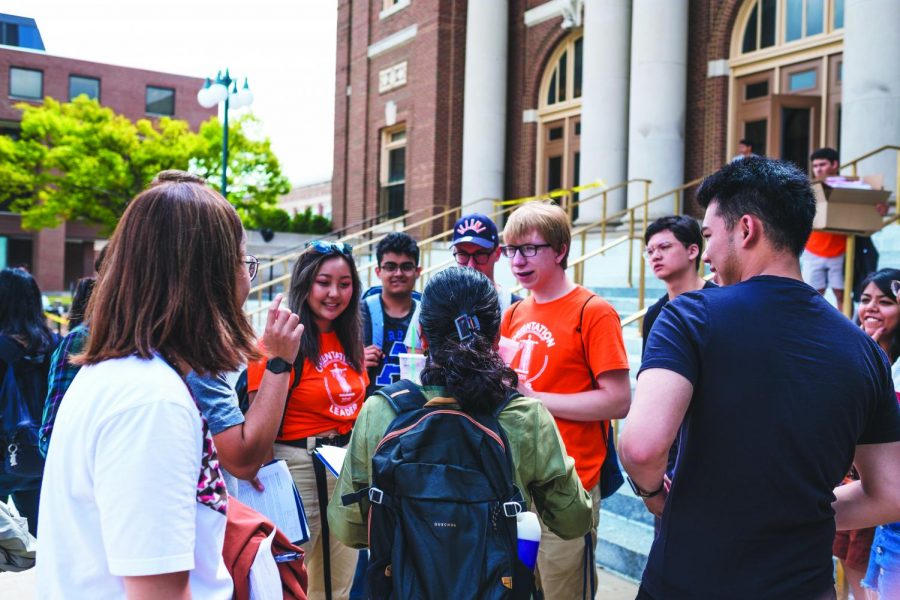 Freshmen and orientation leaders gather outside of Foellinger Auditorium on Aug. 22, 2019. Current University students discuss what they hope to achieve by graduation while alumni reminisce on what they most enjoyed during their time on campus.

Being a freshman during welcome week at the University is remembered fondly by almost every student. The fall welcome days are designed to help incoming students get to know campus better and introduce them to the various opportunities with events, like skating at the Ice Arena, floor meetings, a tour of McKinley, college parades and many more.

All through these events, the incoming students are accompanied by an orientation leader (OL). However, with the onset of COVID-19, the prospects of the fall 2020 OLs remain uncertain.

Ananya George, sophomore in LAS, was an OL for the fall of 2019. She chose to become an orientation leader primarily because of her experience in the program back when she was an incoming freshman.

“The OLs were really cool and one of my first impressions of students at the college,” she said. “I could reach out to them during my first weeks of school if I needed anything; I wanted to be part of that experience for someone else⁠— so I decided to be an orientation leader.”

While George said that she did have an amazing time being an OL during the fall of 2019, she didn’t sign up to be an OL the following year primarily because she was planning on working during the summer as well as the next semester, and since the program was a huge time commitment, it didn’t work out with her schedule.

OLs go through a long and arduous process to be selected for the program. First, everyone applies through a form in which they must disclose why they think they’re a good fit for the position. Following that, a mandatory interview process is held. If they pass, they will be enrolled in LAS 399, a leadership development class that helps them understand their individual position’s details, expectations, jurisdictions and which student coordinator they work under.

Satvik Agrawal, junior in business, filled the role of one of the orientation student coordinators (OSC). The position of an OSC is essentially one position above an OL. While an OL’s main responsibilities are only to perform certain tasks such as giving tours, answering questions and taking part in other orientation programs, OSCs are more like managers.

Agrawal said they’d start planning in September and build up the entire orientation schedule right up until August of the next year, working out each delicate and intricate detail.

He said “During orientation, our main job as OSCs is to ensure that everything is going smoothly and according to plan. I really enjoyed the job when I worked in 2019, but I had to leave once I had plans of an internship over summer this year, but the way things are going, I’m not sure either will work out.”

Kishyori Kamaludin, senior in business who started working as an OL in August 2019, is returning again for this upcoming summer and fall semesters. Kamaludin said it was very uncertain whether the program will even exist in the fall, and she heard through a rumor that incoming 2020 freshmen would have the option to delay their admission for a year.

“Though I am very unsure about this,” she said “but I feel that the New Student Programs have been working to move things to online platforms. Maybe they will try to move it into some kind of online orientation, like a virtual walkthrough. There has been no news as to what they are expecting for the next semester, so I can’t say much.”

According to Lisa Jackson, the Interim Director of New Student Programs, if the Fall 2020 semester would be online, the New Student Programs will offer extended orientation opportunities to incoming freshmen, and the extended orientation programs will be available to incoming freshmen virtually. Nothing is set in stone, a final verdict is yet to be settled upon, but the school management believes we will all receive our final answer sometime mid-June.

She said, “We are currently exploring options where orientation leaders will be able to engage and interact with incoming students in a virtual platform in the event of an online semester.”

Kamaludin said that she imagines the worst-case scenario would mean there might not be one for the summer but would only be true if the online program was being prepared to substitute the normal in-person programs.

“It is difficult to move such an involved experience that is designed to welcome so many students to the U of I to an online platform,” she said.