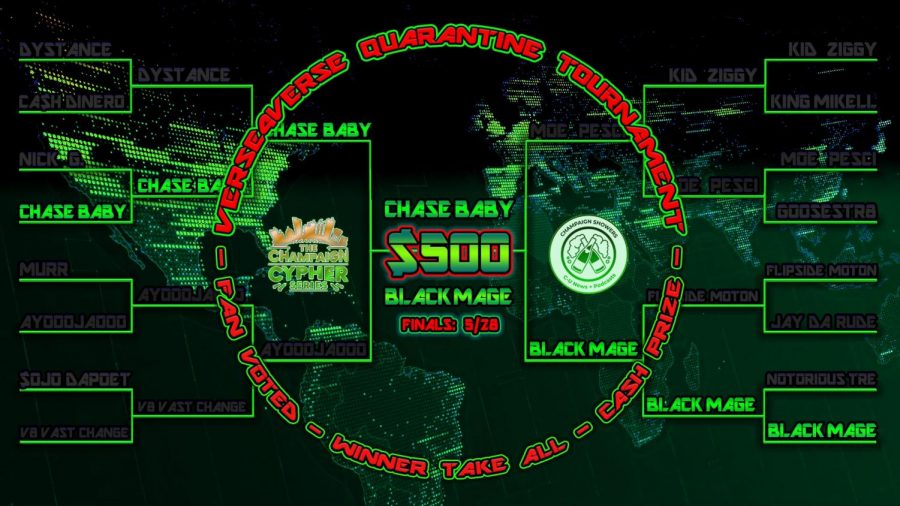 The bracket for the $500 Verse4Verse rap battle tournament lays filled out up until the final round.

Throughout the month of May, 16 Illinois emcees competed in the single-elimination Verse4Verse Quarantine Tournament for a $500 cash prize. Seven different cities were represented in the bracket, including Champaign. Now, two local powerhouses remain standing in the final match: Chase Baby and Black Mage, otherwise known as Chase Scott and DeAngelo Brown.

“It’s going to be neck-and-neck,” Scott said. “I can almost guarantee it.”

“Lots of different hip hop and rap battle leagues and things were doing it, and so I was inspired to do our own with our own twist,” Kjeverud said. “Other people are doing tournaments, but nobody’s doing them like this.”

There were three rounds before the championships, each with a different instrumental assigned to the rappers: first, Jack Harlow’s “Whats Poppin,” then Jadakiss’ “Huntin Season,” in the semifinals, Nipsey Hussle’s “Grinding All My Life,” and finally, Meek Mill’s “Championships,” for the closing match between Chase Baby and Black Mage.

While many viewers were unsurprised to see Black Mage advance to the final round, Brown himself did not foresee his own success. He approached the Verse4Verse as a community effort to celebrate and enliven local music, instead of just a chance at a personal victory.

“Maybe it’s self-depreciating thinking I wouldn’t make it this far, but this whole thing has to come with a grain of humility,” Brown said. “I find it hard to believe that people are willing to listen to me. I just barely kind of mess with me most days.”

Brown said he learned not to expect or rely on public approval early on in his life. His coming-of-age was characterized by feeling perceived as “too black to be white and too white to be black.” Much of this feeling stemmed from his identification with “nerd culture” in a society that could not see “black” and “nerd” in the same frame.

He said participating in the Verse4Verse helped to resolve some of this dissonance and the support he received throughout the tournament spoke to a younger, misunderstood self.

“I spent my whole life carving out this identity for myself, contrary to how anybody else felt about it,” he said. “And there are times when I genuinely feel like maybe I’m doing something wrong, or maybe I should be conforming a little more. So to have the support that I’ve had, for someone so strange — it was inspiring.”

The tournament also became a source of encouragement for Chase “Baby” Scott, whose journey in hip hop has seen struggle and rejection.

His dedication to rap began with his love for freestyling and poetry as a child in school. As a young adult, he began to seek opportunities to establish himself as an artist. He remembers reaching out to the Canopy Club’s talent buyer about every hip hop show, hoping to score an opening slot.

“I got noes probably 80% of the time,” Scott recalled.

In August 2012, he got his first big yes: an opening slot for Machine Gun Kelly. Since then, Chase Baby has risen steadily as a beloved voice in Champaign-Urbana hip hop.

As he became an important part of the scene, live music became a staple of his life. Over the past couple of months, its absence began to weigh heavily on Scott as venues closed their doors in the face of COVID-19.

“I’m for sure feeling the absence of performing,” he said. “Not just monetarily, but spiritually and creatively. It’s kind of creating a void.”

The Verse4Verse gave performers a chance to practice their craft on a virtual stage. Competitors were grateful for a break from the silence.

Beyond just a performance opportunity, the tournament was a community-building force between members of the local scene. It was welcome relief amidst a tough transition away from live spaces, where emcees are used to bonding and networking.

“Ever since the shutdown we’ve been growing apart because we haven’t been able to get to each other,” Brown said. “I think it gave people a way to be close to people they could not be close to at the moment.”

The Verse4Verse was an exciting event for audiences as well. Its organizer Rob K. decided to give viewers a direct hand in the course of the competition by making it fan-voted. While some participants objected to this condition, citing the potential for bias, Kjeverud felt that fan voting was a healthy and engaging component of the process. Audience participation, as much as performer participation, was key to his goal as the event’s creator.

“My primary intent is not to determine who’s the best rapper in the land,” Kjeverud explained. “It’s to do something as a community.”

This content serves a purpose greater than the competition at hand. Kjeverud invested tremendous time and effort into putting the videos together, on top of the work already done by the emcees, in the hopes of creating a timeless product. Ultimately, he aimed to strengthen the online presence of C-U hip hop.

“I’m happy to put those together, and that’s hopefully something that people can watch for years,” Kjeverud said. “So if people are searching around for Champaign hip hop at any point, or any of the artists, then they’ll stumble upon these sort of things.”

The video series is now complete, with the final match posted and ready for judgement. Polls close on Sunday at 4 p.m.

“I will say this was the one battle that I was the most worried about,” Scott said. “There’s nothing really I can do that he can’t do, and vice versa. So I’m eager to see how this all pans out.”

Editor’s Note: There was a grammatical error that has since been corrected. The Daily Illini regrets this error.